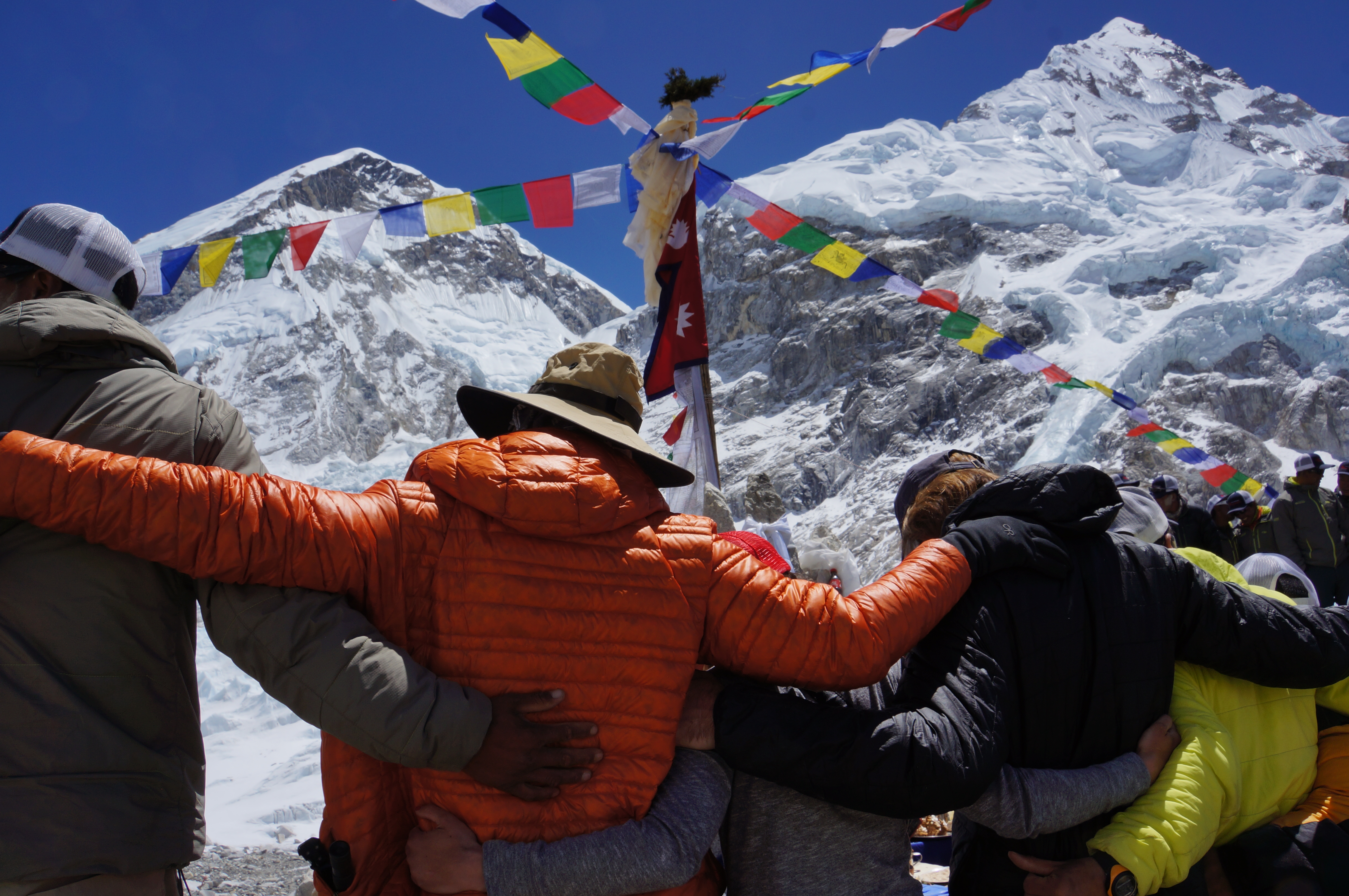 Today was very important for our expedition.  We held a blessing ceremony, or puja.  This 3 hour extravaganza seeks permission from the mountain deities to allow safe passage for all climbers on the mountain.  The elaborate ceremony was presided over by a lama from far down the valley… he was an adorable elderly man who truly did not look capable of walking all those miles up to our camp.  Think Yoda, but not green, and with a more charming toothless smile.

He faced an altar made of stone, adorned with food and tsampa sculptures.  A smoky fire of juniper boughs burned at the base of the altar, and blew right in our faces the whole time!  This is a holy tree, and its smoke is revered, so I certainly dared not fidget or show my discomfort.

We were seated just behind and beneath the front row of holy men who led the songs and chants that went on for hours.  The sun was out, and the icefall showed itself in all its fearsome glory.  During the ceremony I studied it closely, and was moved almost to tears thinking of those lost there last year.  It was a freak occurrence, to be sure, but it happened to men who had gone through this puja process and had died just the same.  I promised myself that this year will be different, that the route will be safer and more efficient, and I reminded myself that these men are here by choice—indeed, they are heroes and very well paid members of their community—but in the end I was totally humbled by their sincerity and earnestness.

Towards the end of the ceremony a flagstaff was raised at the center of the altar, and long strands of prayer flags were stretched out to encompass the entire IMG campsite.  We threw rice as a tribute to the mountain, ate tsampa (which actually tasted much better than I recalled from 1984), drank beer and chang (an unfiltered rice alcohol, think of opaque sake with lots of chewy stuff inside).  And, we painted each others’ faces with flour to represent grey beards and a long, prosperous life.

Then came the dancing.  Lots and lots of dancing.  With arms intertwined, we formed a long line and kicked our legs out in an inscrutable rhythm (I am a terrible dancer, ask Julie).  It did not help that I was positioned on a small slope of blue ice.  Anyhow, this went on for quite some time, happy and fun.  By the time lunch came around we were already full and bloated.  The idea of moving to Lobuche basecamp tomorrow is not appetizing, but we will do it!