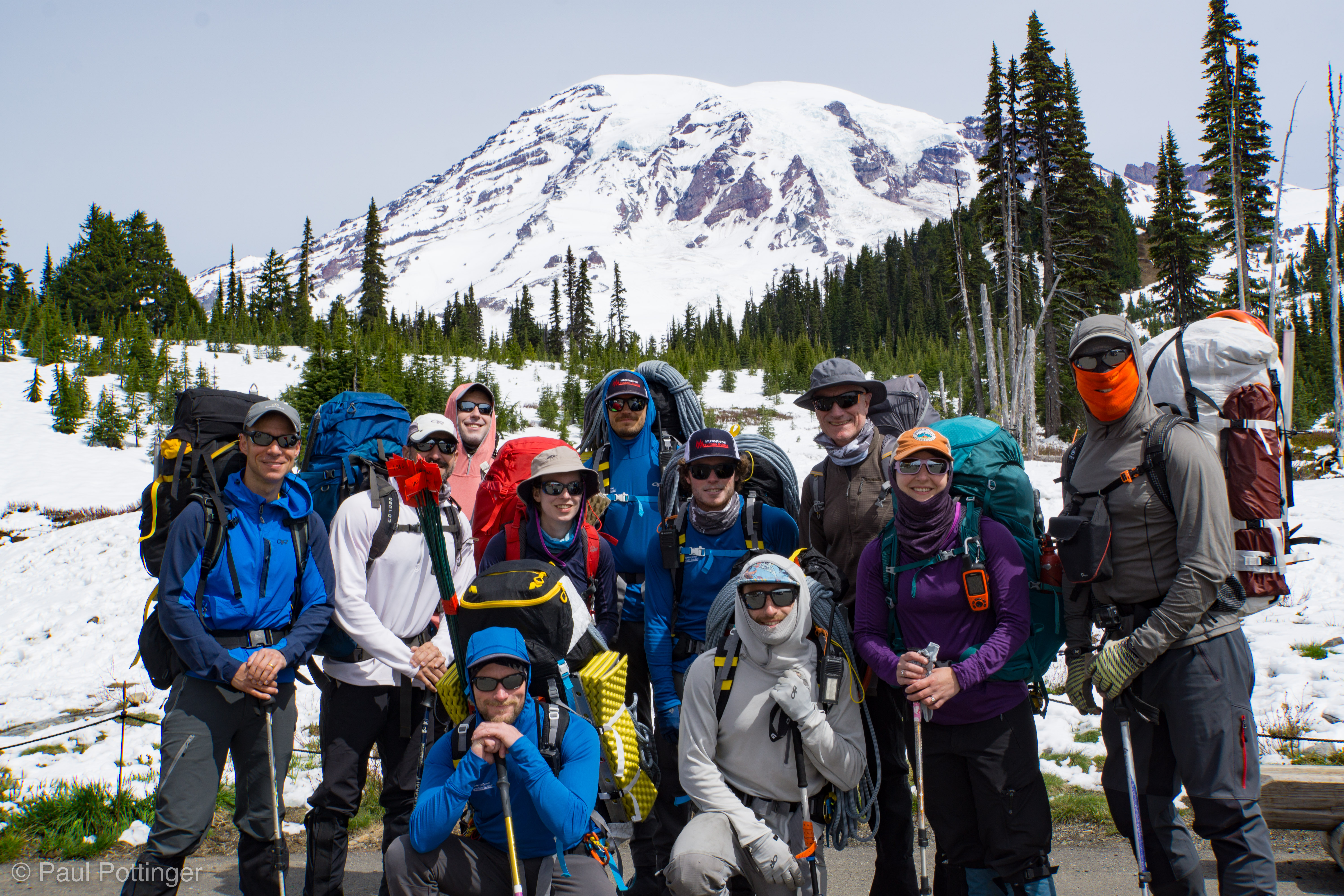 Tahoma (AKA Mt. Rainier) is one of my favorite mountains…  I am fortunate to be 4 for 5 up there, twice on the Emmons and thrice on the DC, most recently as a team leader in July 2017. It is a sacred place for me, actually, and always provides that unique combination of challenge and beauty and proximity to home.

Climbing via the Kautz Ice Chute would be a different kind of challenge:  A new aspect of the mountain… steeper terrain, including vertical ice… a full traverse of the mountain, meaning heavy loads all the way over the summit. Teresa invited me to join the expedition… what could I say but “YES!”

One of the great things about mountaineering is the way it allows us to make new friends. In this case, there would be 4 new guides and 5 new climbers to meet, which is great. Natalie was the first I got to know: She is a doctor moving from Australia to Canada, and decided to bag Rainier on the way. How cool is that? We were glad to give her a place to stay before and following the expedition.

The first afternoon at IMG was spent in orientation with Nickel, our lead guide for the trip. Every detail was covered, every aspect of the trip discussed clearly. It was such a pleasure to relax while he prepared us for the expedition… all the stress and details I would usually have to cover on my own were being laid out for us in a lovely, reassuring fashion. Based on the incredibly warm forecast (with no precip, freezing levels predicted at 16,000 feet on our summit day, and the only possibility of winds at 30 MPH on our second day), my kit could be trimmed a bit. I still came in just > 45 lbs at the start, but every piece of gear was carefully considered. I have never been guided on a Rainier summit attempt, so this was going to be a new experience for me. I know IMG very well, and was excited to learn some new techniques and see a new part of the mountain with them. The first thing that kicked me in the head was how little crevasse gear they wanted us to bring: Just a harness and a few ‘biners. No prusiks, no cordelettes, no tiblocks, no pulleys…. I ended up carrying an ATC at their request, but as anticipated we never needed it.

Everyone on the team was fun and experienced. And I thought, This will be a blast, and it will be posh!

After everything was arranged for the following morning, we took time to visit the guides’ memorial in Ashford. It was a quiet, sobering reminder of the price others have paid in supporting us in our pursuit of high places around the world. Each a unique individual, a brilliant life lost much too soon. I thought of the chortens of Thokla, and the catharsis and heartbreak that had overwhelmed me leaving EBC for the last time in 2016. The PTSD welled up briefly. But, not today. Today was about moving forward. And hamburgers. And Rainier beer.

The next morning we put finishing touches on our kits, loaded up, and drove up the mountain. At one point, near the Kautz Creek trailhead, we caught a glimpse of the Ice Chute: A white stripe of snow surrounded by dirty blue ice, thousands of feet above. Dude… this ain’t the DC.

The weather was perfect. Our spirits were high. The parking lot was jammed—positively jammed—with every stripe of humanity. Young, old, domestic, foreign, fit, flabby, you name it… everyone was making the pilgrimage to see this most majestic of mountains. Rainier is in my back yard, and it’s easy to take it for granted. But up close, there’s nothing ho-hum about this peak. It was soothing to see so many people who love and respect her the way we do, people flocking in from far and wide to bask in her glory. But, we were not there to bask. We had come to climb.

The trail from Paradise… how many times have I walked it? Today it was a pleasure, but HOT. I worried—as always—about sun exposure’s effect on my skin, and on my kidneys. The new OR sun shirt seemed to work perfectly, and I was reassured by the guides wearing the same shirt who said they had never been burned through it, despite the “SPF 15” label. Besides, my double-buff-plus-beko system was in order. Still, it was hot, and the thought in the back of my mind remained constant: When will some clouds roll in?

Just before the trail pitches up to Panorama Point there is a small rocky outcrop that overlooks the snow field spilling down below the Nisqually glacier. I have stood there many times, looking out at the untouched terrain, wondering about the best way to negotiate it. This was our first break spot… and the place where we would leave the beaten path and start making our way towards the Kautz.

After passing a marmot grazing on the trail, we dropped down to a long descending traverse in soft snow. We then curved along a large, snowy basin, paralleling the Muir snowfield ridge from below, for a short time before stopping on a gently sloping area for another short break. Crevasses lurked ahead, and from here forward we would always travel roped up.

We could see the objective hazard clearly from here: a bottleneck feature, with a vertical cliff above on climber’s left, and rotten icefall above on climber’s right. Our route would thread between these features, up a steep snow field that would trend left, to a broad bench above the cliff. Our guides were clear: This would be difficult, because we needed to get through quickly, and there would be no stopping. Damn right.

Such a beautiful section, with our first look at icefall up close as we hustled past: Dirty blue seracs jumbled together, bridged by fresh snowfall, leaning awkwardly like a pile of bayonets. It reminded me of the Khumbu… except that is 10,000 feet higher, and we would be walking straight into it. Underfoot, a single crevasse stretched across our path, easy to cross via an oblique snow bridge… this one was DEEP, with a second chamber below the first drop, a spooky room big enough to fit a school bus, lit by dark blue colors, too dark in fact for my GoPro sensor to pick them up. This is why we do this. Aside from the clatter of a few small rocks being spit out by the icefall, it was still and quiet, and the section passed by quickly.

Atop the cliff we found a broad, beautiful flat area, the Wilson Bench. Magnificent spot to camp, so long as tents are situated well away from possible slides from the bowl uphill. There was a single party camped there, including a dude who had just climbed Denali with IMG! They were kind enough to bring us some peanut butter cups while we took a break, which was super kind of him.

I was feeling it a bit now: the load was heavy, I was dehydrated, and some high clouds began to scoot in—precisely what I had prayed for, but now threatening to chill me. And yet, the snow remained soft underfoot. We could see the location of camp, so seductively close… but in fact an hour away.

Up we went, traversing up along a steep face, then cutting back to the right along a gentle ridge, punctuated by some beautiful dark rocks. On several occasions my downhill foot slid away in the soft snow; cheating steps uphill a bit seemed to help, but it was still like slogging through mashed potatoes. When we reached a flat spot on the route I was ready for a break; we thought camp would be another half hour above, and that would have been totally fine, but the guides decided to call it here, because the location was so great and the route seemed to be in good condition above.

Camp 1 was a beautiful, relaxing place. Dinner was delicious (curried veggies and rice). We even had flickers of 3G coverage. The next day’s route was plainly visible, and it looked very doable. We looked West towards the sunset and hydrated while waiting for the temperature to drop. Day 1 had been a success, by any measure. This is why we do this.