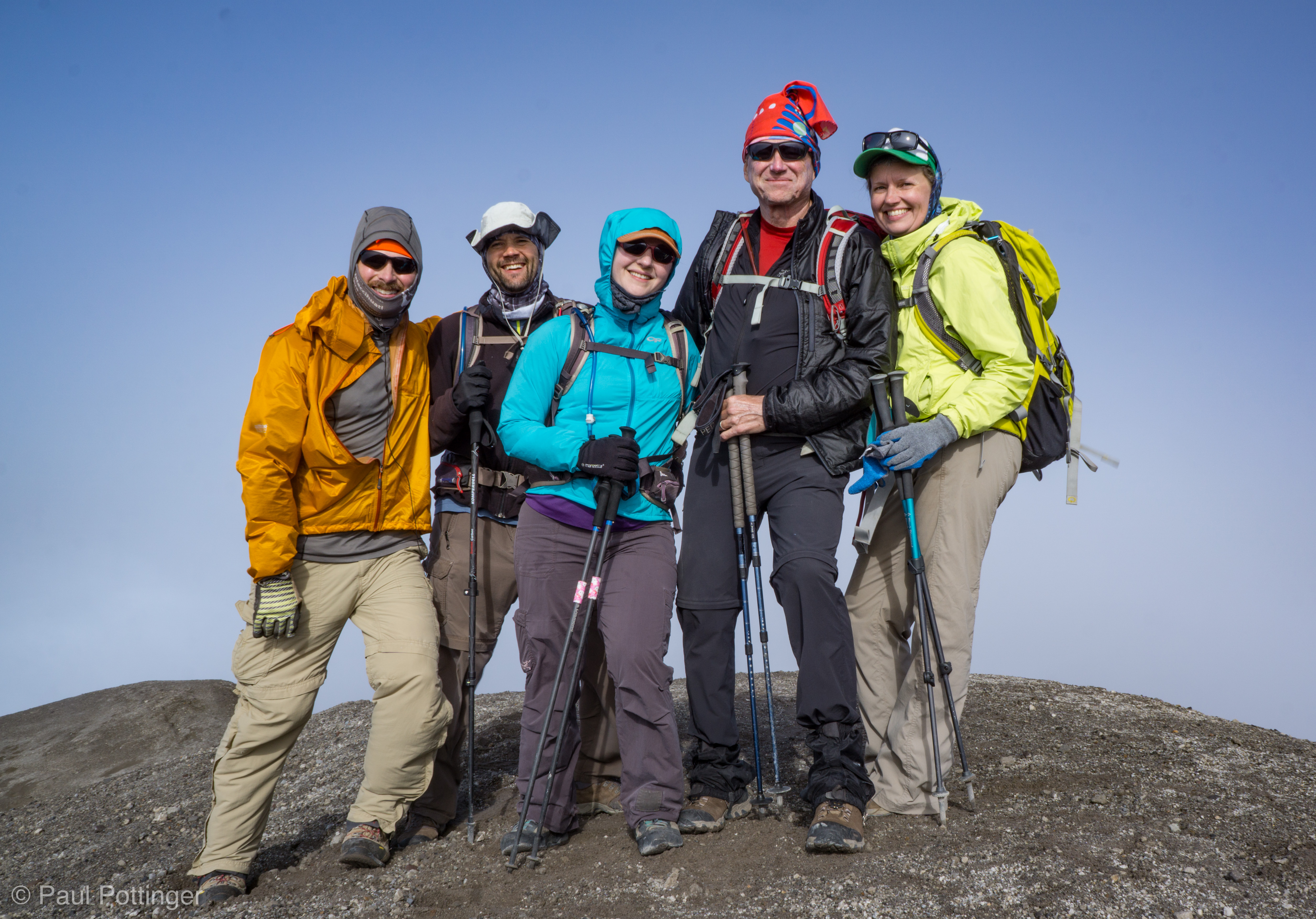 In Puyallup mythology, Loowit (AKA Mt St Helens) was the object of affection from two god-brothers: Wy’East (AKA Mt Hood) and Klickitat  (AKA Mt Adams). When they could not stop their quarrels, their father Sahale struck them all down, and they formed into the volcanoes we see today.

In Cowlitz mythology, things are different: Tahoma (AKA Mt Rainier) had an argument with his two wives, Lavelatla (AKA MSH) and Pahto (AKA Adams). Lavelatla became jealous, blew her top, and knocked the head off Tahoma.

So, Loowit has always been a special place, long before 1980. Each of us had climed it before… for me, the last time was in the runup to Vinson, in November 2013. But we were all excited to be back. This day was a chance to explore a spectacular mountain with friends… to bask in the grandeur of one of nature’s most sacred places… to challenge ourselves with a brisk day hike… to be unplugged. And, to ensure the experience was not sullied by the exhaustion of work, we arranged to spend the nights before and after at a hotel nearby in Woodland. #posh

Up at 1:00 AM… out the door at 2:00 AM. As we started out, it was obvious that this would not be ideal weather conditions: Misty, moody, wet, warm atmosphere. As we went higher, the soup became thicker. By the time we reached Climber’s Bivouac, it was a true dense fog, with about 20 foot visibility. Had we brought the right gear? Would we summit in a whiteout? Would we summit at all? There was only one way to find out.

Yeah, it was foggy and still… not cold, really, but certainly not comfortable climbing weather. We had the mountain to ourselves. We had each other. And there was nothing to stop us.

Eventually we saw hints of sun, even blue sky above. As the sun rose, so did my confidence that we could get on top of the moody brew and into crystalline sunshine. And so we did.

Up we went, climbing rocky bench after bench. The basalt and pumice provided excellent handholds, and most of the boulders were very stable underfoot. We were doing this, and nothing could stop us. Nothing, except the spectacular cloud cap growing on the summit.

I was surprised to see persistent snowfields near the top, which sported young suncups and even some creavasses ~20 feet deep. Snowfield with cracks? Legit glacier? You decide. Chris used his eagle eye to spot a piece of fabric flapping in the wind below the trail, near one of the snowfields. We agreed to get it on the way down.

The wind grew, and although it was never ferocious it was legit. I thought, Loowit is coming and She is Pissed. Once again my GoPro 7 stuttered and froze just at the wrong moment, precisely as it had on Olympus a couple weeks earlier. I need a new camera!  As we approached the top, I thought of the last time I had been here. It was a totally different experience in winter, intentionally so: I was preparing for Vinson, thus climbed with a heavy pack, in Olympus Mons boots. At this location I had felt whipped with exhaustion, really struggled to make the last steps in snowshoes, with the heel stops all the way up. Getting to the rim was a big deal for me, and I was elated to have made it with my brother and buddies John and Doug. I was sorry only that we could not creep to the edge to peer straight down, for fear of breaking a cornice. Today I felt fine, just perfectly fine and dandy. Older… lighter… warmer… more experienced… wiser. The Seven were under my belt, and I had nothing to prove to anyone, not even to myself. This was all about enjoyment. And we enjoyed the hell out of it.

We had the mountain totally to ourselves for some time up there. We found refuge from the wind in a small valley and took in the scene. Again, as always, I was amazed and grateful to realize that this is my state, my home. We live here. Some fun folks came up behind us. Then some folks who seemed less prepared but still had a great time. Then I fell flat asleep on my back, snoring and dreaming deeply of the volcano. I recalled the final minutes of Fantasia 2000… I urge you see it in full HD. We ate and rested and chatted. And then, inevitably, we had to descend.

A beautiful, relaxing, inspiring, fun climb. Is there any other kind?