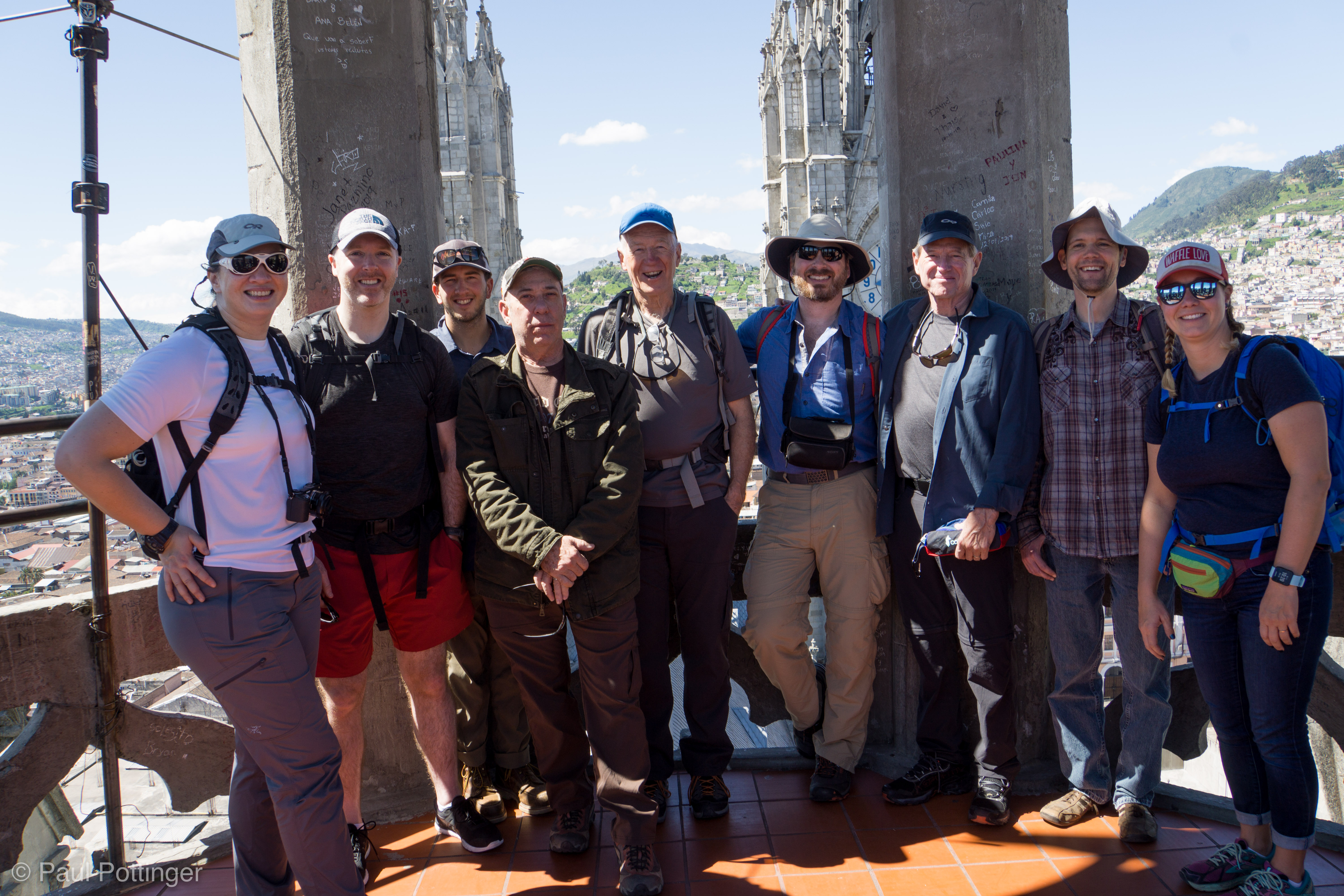 In April 2020 I was so fortunate to climb Wy’East (Mt Hood) with my friends Teresa and Marjorie. It was a great experience. One of the best things that came from that particular climb was my sharp ear overhearing T and M discussing an upcoming trip to Ecuador with IMG.

Ecuador! I had visited Galapagos years earlier, but knew almost nothing about the mountains of the highlands, other than their reputation for being tall and austere and beautiful. Oh, hell yes… I had to invite myself onto that expedition. Somehow I managed to do that, and whether it was actually welcome or not we will never know, because each of them is so kind and polite that they made it seem natural that of COURSE I was welcome to join. Anyhow, I am forever grateful to them for allowing me aboard. And for allowing me to invite so many other friends, too… I wish that everyone I knew had been able to join, but in the end we had a wonderful crew of seven who were all one degree of separation from each other, with me as a link between everyone, plus two new friends who were longtime buddies. And our guides would be incredible too: Romulo Cardenas, master of all Ecuador’s volcanoes and culture, and Jay Lyons, a wonderful guide who was a veteran of these ranges, among many others. It ended up being a sensational crew!

The lead-up to this climb challenged me in many ways. My work obligations piled up in extraordinary ways, interfering with my planned fitness regimen. I work hard, and I’m proud of what I do. In this case, professional responsibilities really hampered my training plans, and that is my fault and mine alone. It is an occupational hazard that I am fully aware of. Just not enough free time to get into the mountains like I had wanted. I knew this was coming, and purchased a NordicTrack exercise bike, which I really recommend (seems superior to the Peloton for a variety of reasons). Hooking myself up to the Hypoxico generator and riding at simulated 10,000-13,000 feet helped get things going. But, still not as much training as I wanted.

Still, I was excited for this vacation, and pulling my gear into the duffles was a happy chore.

And then, several days before departure, I caught 2019 Influenza-B. I’m certain of it. I had planned to arrive a day early, just in case of such an issue… by the night before my scheduled flight to Quito I was febrile and had a tough time sitting up. We tried to move the flight back by 1-3 days, but there were simply no seats available, and besides such a delay would have moved me out of synch with my team. Reluctantly, I got up at 4 AM and headed to SeaTac… I did my best to control my fever and secretions, scrubbing my hands and seating area regularly with Purel. If only the dipshit who gave me this infection had done the same thing…. Connecting through Dallas was a strange experience: Texans, you are an odd lot. Not all of you… but, what an odd lot. Who flies with the window shades pulled during flight, including takeoff? Aren’t you interested in the view?

I actually flew pretty well, almost never sneezing or coughing, thanks to a variety of symptomatic remedies.

Landing in Quito was a real joy—a modern airport, immediate clearance through immigration and customs, and a super snappy cab ride to our hotel downtown. I had forgotten that the Chinese had built a network of highways here, which looked and felt like home. (The actual price of this infrastructure is unacceptable and should be outlawed by the World Bank, but that is another story.) Ecuador chose to use the US $ some years ago, and that makes traveling there as an American very easy. Their electricity is even identical to ours. Connectivity was good, and I was able to plow through several dozen emails that had arrived during my trip. I prefer to chip away when possible, rather than arrive home to hundreds of unseen messages. The taxi cruised along through a dense cloud, then descended into a large basin filled with sodium street lamps: Quito. A new city for me, and very exciting.

By the time I reached my hotel I felt WORKED. Four of my friends had arrived a day earlier, and I was eager to connect with them. Maybe I will feel better tomorrow.

I did not. By Jove, it felt as if my head would literally crack open every time I coughed: Holding my skull like a vice seemed to counteract this intracranial pressure. Before coming down to breakfast, I laid out some ground rules via text: “On my way to breakfast. Rules for interacting with Paul: Do not touch Paul. He is infectious. Do not let Paul touch you, which he might try to do in his viral fog. Talk to Paul but note that he should not talk back much, because talking may trigger a cough. Love Paul but be tough! #noviraltransmission #lungbutter”

From London, Paul Devaney replied, “Well there goes the long anticipated romantic reunion of the Pauls. Thanks a lot, infectious disease.” It had been 6 years since we had climbed Vinson together, but thanks to FB it seemed like no time had passed at all.

I proposed that we call ourselves Team Sputum but that did not seem to stick, for some reason.

So great to see Marjorie, Jerry, Chris, and Teresa. They had been in Quito for a day already, and were planning another fun day out, including a hike to ~13,000 feet. I had trouble lifting my head from the breakfast table. Clearly, they could acclimatize without me. I think they were relieved (Teresa said I sounded “like a dying walrus”). I climbed / crawled back into bed. A moment later I checked the clock: 12:43 PM. I’ll just close my eyes for a moment. When next I checked it was 5:15 PM. A text awaited me from my friends, asking if we were still on for dinner at 6:00 PM. I slithered into the shower, feeling like an iguana with hibiscus poisoning, and tried to come back to life. Always a bad sign when a hot shower makes you shake uncontrollably… but, flu be damned, I would eat a meal with my buddies.

Romulo recommended a fabulous restaurant for us. Sad news: No Lyft yet in Quito. Good news: They have Uber! More sad news: The drivers do not use GPS, preferring instead their own knowledge of the city. This would be fine… if they would only ensure that the address they have in mind is the one we want. Which, in this case, it was not. We gave the driver the correct address online and again in person. And warned him that there were TWO restaurants with the same name in Quito. Still, he charged up steep hills and down narrow alleys, and delivered us to the incorrect location. A beautiful location, to be sure, and they were happy to seat us. But our buddies awaited us at the other site. Thus, we called for a cab and limped back to the center of town.

Totally worth it: Lovely location, great food, and my good buddy Paul Devaney (P1) awaited. Together, we form The Entity. The last time I saw P1 was in 2015 in Pheriche, when our teams headed down the Khumbu after the quake. Now, it was as if no time at all had passed.

The next morning we met with our other team members, including the lovely and amazing Hui Ling McCarthy, whom I had not seen since January 2014, at the end of the Vinson expedition.

This was a busy day: We met as a team for breakfast, then toured the center of Quito, then drove North several hours to Otavalo, our staging area for a couple warm-up climbs. Oh, how I wished for another day—just one—to lie in bed. But, this trip has a very packed agenda, and there was no time to wallow in my own misery. This turned out to be a good thing, as it was a super fun day.

So much history and cultural heritage in Quito! A vibrant, interesting place, to be sure. And at about 9,000 feet AMSL, just walking around provides an opportunity for the lungs and body to acclimatize. Romulo was the perfect tour leader, providing unique Ecuadorean perspectives gleaned over a lifetime of guiding. 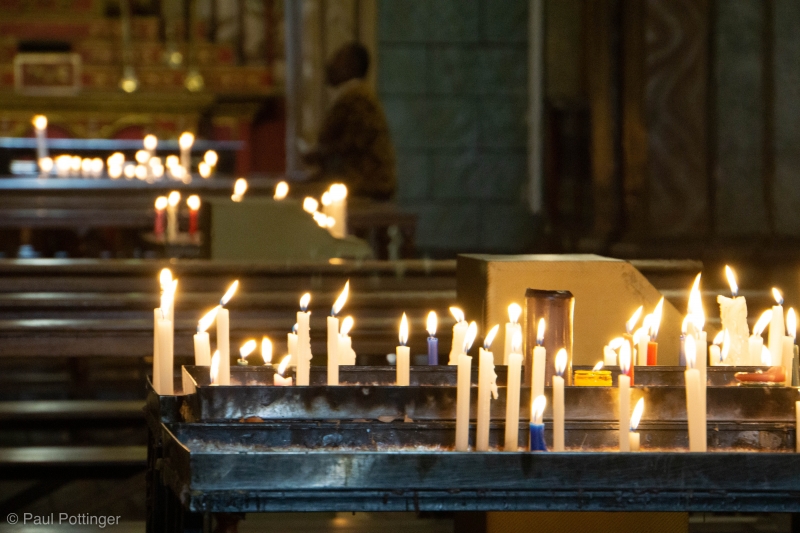 P1’s bags had been left behind in Madrid by Iberia, so he needed to wait in Quito for them to arrive that night, then would rejoin us. For the rest, it was on to Otavalo! Up into the hills we drove… making a stop for lunch, of course. (Yes, the potato soup in Ecuador is as good as you have heard). At one point, on a nondescript stretch of road just below a pass, Romulo ordered the bus to pull over and asked us to follow him for a “little hike.” This led us up sketchy / chossy slopes to an abandoned brick pyramid, which was a marker of the equator built years ago by the Ecuadorean government. Except, this was clearly NOT the equator, according to my phone and everyone else’s GPS. And, that was the joke: traditional survey techniques had led the government astray! “Let’s find the real equator,” Romulo called. “Vamanos!” Up and down a ridge, into a valley, surrounded by tall grass and Agave plants making their hundred-year flowers… to an unremarkable spot in the sand. The only thing that made this spot interesting was a man-made cave, an abandoned pumice mine, that provided cool relief from sun and wind.

Back on the bus, we eventually crested the pass and began to descend into Otavalo, a beautiful smaller city nestled between—you guessed it—more volcanoes. Towering over the town: Imbabura, the “Fish Volcano.” Legend has it that during an eruption many years ago, most of the Imba fish in the city’s lake died, and floated belly up to the surface. The natural conclusion was that the fish had flown out of the volcano and landed in the lake! And… who can prove them wrong?

Otavalo is an interesting town that we would have more time to explore the following day. That evening, before dinner, we visited longtime friends of Romulo, a very impressive family of weavers. Everything in their shop was created by hand, including the dyes used for their alpaca wool clothing and wall hangings. I was delighted to find two items that my wife Julie would love.

Over dinner in an historic (and very posh) hacienda, we got to know each other better… the infectious diseases doctor stricken by flu… the anesthesiologist who grew tired of seeing so much violence and chose to become a pyrotechnician… the former pyrotechnician who almost died in an explosion… the aircraft engineer whose bag was lost on a flight… the telecom guru who could get scant phone service… our team name became clear: Team Irony. Less repulsive than Team Sputum, and more suitable to all.

I collapsed in bed, in a fog of exhaustion. An incredible day. And I was incredibly tired. I wondered how would I do the next morning on Fuya Fuya, 13,986 feet AMSL.