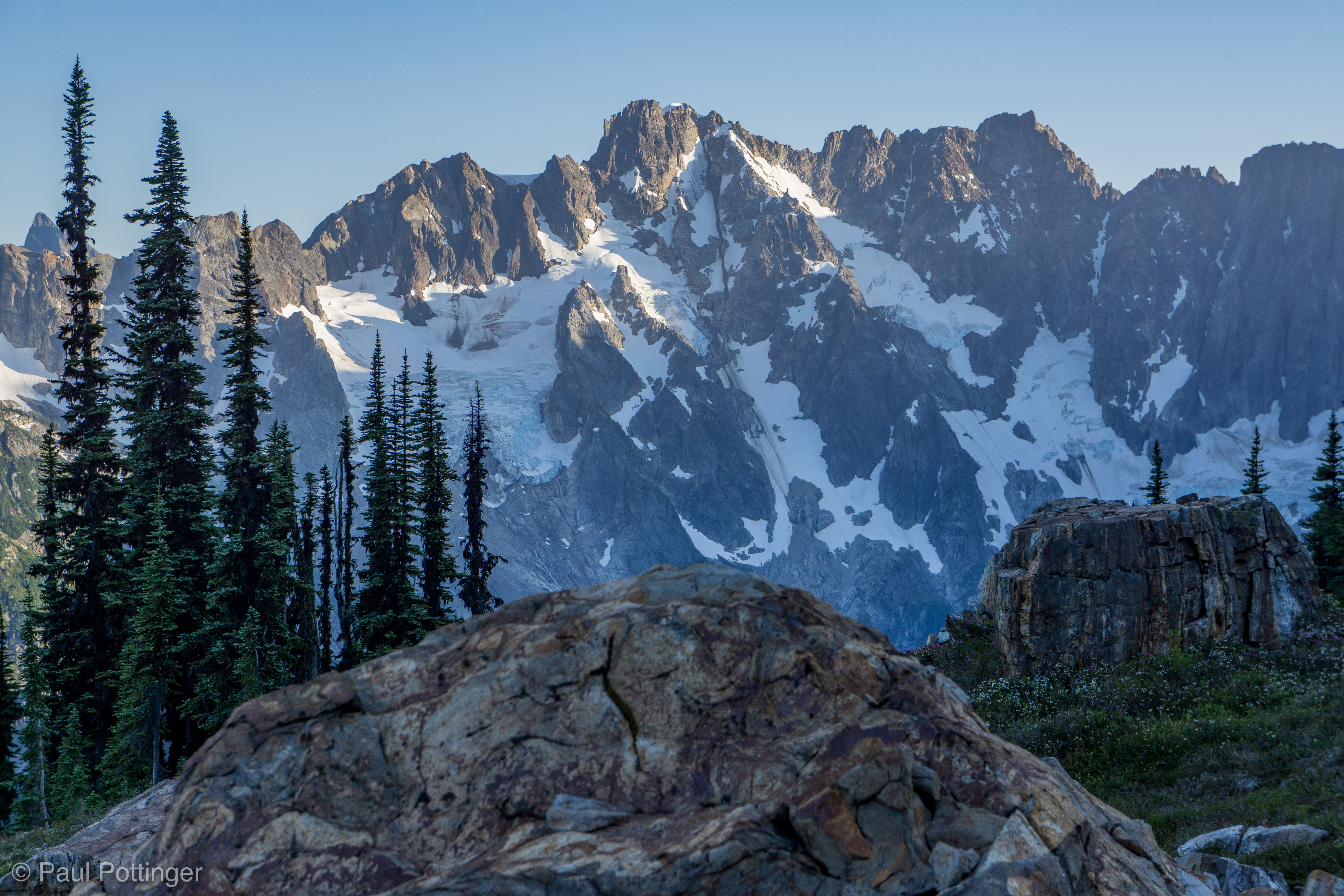 Video digest of the day’s travel:

We were all tired, and it was soooo tempting to sleep in that morning, but there was much ground to cover (none of which was on trail), and the slope would get hot early when hit by the AM sun… we resolved to start walking by 7 AM. So, up at 5:30 it would be. I slept pretty well, and awoke feeling largely replenished. This was good news, because I predicted day 2 to be our most challenging day of the trip. It would involve (slightly) more elevation gain than the other days, we would still be relatively heavy, and it involved climbing a slope that was notorious for its difficult terrain: would there be Devil’s Club? Nettles? Sumac? Thistles? Slide Alder? Moss? Rotten tree limbs? Loose rock? Time would tell. I recalled how bad my buddies looked one season after they had tried to take a shortcut down from Hannigan Peak, and I did NOT want to look like that. Ever.

On went the boots, and we were off. First stop: The Emergency Shelter a few meters uphill, where we chose to cache a bit of gear we planned not to touch again until we returned here for the last night. Losing the approach shoes and our last meals lightened our loads nicely. This is probably against regulations. I did not care.

Nothing left to do but leave the trail and head into the woods! We had a track from a prior party, who was kind enough to leave it online. It helped… mostly. But, really it was Justin who figured things out, with a skill that is hard to describe. I guess guiding outdoors for a whole career will do that… he just seemed to know the least bad way forwards. We were very grateful to follow him. Initially, the terrain was actually OK, meaning lots of tall trees and little brush in between. And, the slope was not too steep, either.  We discovered the truth: There is no Sasquatch, for if there were, then truly he would live here. It was quite beautiful, and deeply shaded.

Eventually, of course, things changed. First, the pitch steepened substantially, and it felt like climbing a ladder of loose dirt and pine needles, punctuated with roots and chossy rock. While carrying > 40 lbs on your back. In the heat. Under assault of a jillion, squillion biting insects. So, so many bugs! Getting bitten was actually not the top concern, because we could cover most of our flesh under clothing. No, the worst part was their tendency to enter our eyes, ears, and respiratory passages. Breathe through your nose, and they will get caught in your turbinates, or occasionally make it to a sinus and buzz for a while until they died. Breathe through your mouth, and they will certainly become swept into the trachea and mainstem bronchi. They did not stay long, of course, because this triggered violent wet coughing fits. But, an unpleasant feeling for sure. Put on more bug repellent if you choose, but it will sweat off in a hurry. For me, 20% picaridin worked well but only in camp; underway, it just could not fend them away well enough, nothing would have. And all the while we crashed and thundered through branches that reached out and grabbed us, getting snagged on our gear, whipping us in the face with their leaves, tripping us up on their slick, lubircated bark. The only good thing about the trees seemed to be their ability to afford shade… and their offer of abundant, reliable veggie belays. Oh, and I’m allergic to whatever tree pollen they have up there. Still, we made fine vertical progress–we had to, considering how steep the terrain was.

There were three distinct mossy cliff bands that required extra negotiation and effort. One in particular was so steep that we chose to take a drainage to the right, meaning we climbed up a waterfall for over 100 vertical feet. This was daunting given how overgrown the canopy was, and how slick the mossy bottom. But, the handholds were firm and there was really no other option. Up we went….

Eventually we emerged from the World of Moss into a bright, shiny meadow of wildflowers. Perfect place for a break! Food, water, sunscreen, picaridin, and other self care. This included clearing my nostrils of the most curious obstructions: Casts of an unspeakable mixture (inspisated mucus, blood, mosquitoes, sunscreen, dirt, and other horribleness) blocked both airways. Snot-Shots alone would not clear them, this required deep probing up to what felt like my first knuckle. For those who consider climbing Challenger via Big Beaver, please remember my tale of the Big Boogers. You have been warned.

Anyhow, after saddling up again we made our way higher and higher, and enjoyed ever greater views. More forest scramble time awaited us, but eventually we truly broke free into an alpine landscape of heather, scrub, boulders, and all the fresh air anyone could ever hope for. (And still, the mozzies persisted.)

Our next problem presented itself: A large gendarme blocking our progress towards the ridgecrest. Justin reviewed the topo lines and felt that there was no reason to go higher here; instead, we could traverse at our current elevation (roughly 6,400 feet) and enter a series of ravines in the distance. But, below the gendarme we faced a new issue: Exposure to climber’s left. This was a steep meadow that fell away precipitously… truly, a “no-fall zone.” Absolutely no worries, we could handle it: Just proceed carefully, step by step, and eventually we would make it across. And, of course, we did.

Beyond the traverse, another surprise: Steep, terrain separating us from the deep ravine beyond. We determined that the least bad way down was to follow the ridge nose, to our left, through a world of choss and scree and sharp, catchy conifer branches, until eventually we made our way to the top of a steep meadow wall, which we could safely descend towards a rocky stream, perfect place for a break.

In fact, it was the perfect place for high camp. This was short of our planned camp location, at either Eiley or Wiley Lakes. But, they were probably 2 hours away… it had been a long day already… we were within striking distance of the summit regardless… and camping here meant a lighter traverse and ascent the following morning. We put our packs down and settled into one of the world’s great campsites.

The bugs were still aggravating, but it did not matter. We were in position for Challenger! The re-re-match was going to happen. All I had to do was take care of myself and rest up. Although this day should have been tougher than the prior one, I actually felt better. This was happening. I dreamed of the upper mountain, preparing myself for what we would find.

In fact, the true upper mountain was even more beautiful than I had imagined. But, I would have to wait until the next day to find out.