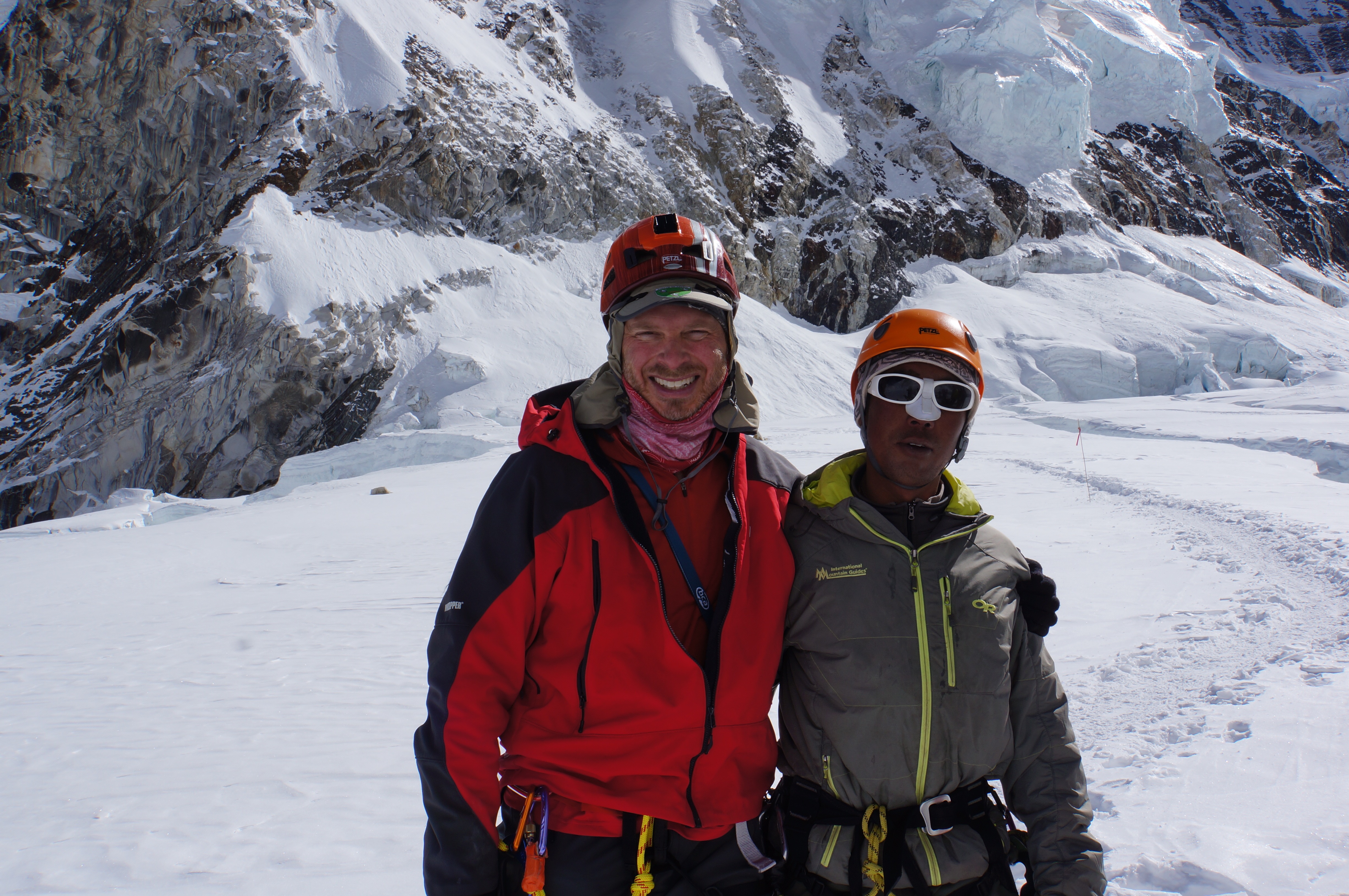 Our planned day of rest dawned clear and cold.  Well, “active rest,” as we call it up here.  After breakfast at a reasonable hour, we roped up and took an acclimatization hike halfway to Camp 2.

C2 sits at the far end of the cwm, perhaps 1.5 miles horizontally, and about 1,800 feet higher.  From C1 we could see the upper end of the cwm quite clearly, with Lhotse towering like a sentinel at above.  But, C2 itself was too low on the horizon, hidden behind wave after wave of crevasse and hummock that rose up in front of us.  The prior day while we rested at C1, we had watched other parties make the trek to and from C2, like a string of tiny ants walking in a huge milk jug lying on its side.  The route was simple, although a huge dogleg to the right looked painful.  I predicted that we would reach the halfway point, where the route flattened out and away from view at  C1, in an hour at most.

But, everything is deceiving up there.  The trip which would have taken us perhaps 30 minutes back home was closer to 90 minutes (at nice leisurely pace, with a little traffic).  Huge, gaping crevasses slashed across the cwm, especially near the west shoulder (hence the dogleg to the right).  Hummocks 20-35 feet high blocked our way.  Scaling these was a big effort for me, as it had been on the icefall below.  I got short of breath twice, especially with the effort of using my arms to ensure balance on the steep track.  Everything is fine, just take your time.  No rush here, I thought.   Again, I was humbled by Everest.

These active rest days are excellent in every way, not only for our bodies, but also for our spirits.  Getting to the vantage point above C1 was awe-inspiring.  The sun rose from behind Everest, warming us nicely.  We had a great view of the summit, and of the cwm below.  In the distance we could see C2… or, at least, the rock formation where we knew it was; the distance was too great to allow us to see the tents with the naked eye.  But, it looked relatively flat and mostly crevasse-free, certainly not daunting.  In fact, there were piles of helmets and crampons at the break site, where Sherpa ahead of us had cached them because the route beyond was so straightforward.  We planned to keep our gear on, but it was nice to see this.

The descent was snappy and happy, breathing was fine, and my mood was good.  You’ve got this.

After we got back to camp, we spent more time sunbathing in front of the tents.  One of our favorite pastimes was to watch other teams on the route.  We were aghast to watch a whole team rappel the tallest hummock, which led to a big traffic jam above them.  I had gone down this one with my usual technique, clasping the rope with leather palms and a straight rear arm, in just a few moments.  These folks took about 5 minutes per person to descend using traditional rappel technique.  Maybe they were doing it for practice… but it looked painful.  Oh lordy, I hope we don’t get caught behind those guys higher up the route.

Happy day: our team was made whole again with the arrival of Siva, Phinjo, LC, and Justin.  Although the rest of us were scheduled to leave the next day for C2, it was fun to have the gang back together for a day.

The team arriving that afternoon bore a friendly message: We were invited by another expedition to join them for dinner—so long as we provided women and alcohol.  This was a nice joke.  First of all, there’s no booze above EBC (that I ever saw).  Second of all, although team IMG did have the most beautiful women on the mountain, they were also the smartest, toughest, most talented climbers up there, and they were certainly capable of making up their own damn minds.

We ate in our own camp, as a team.

2 thoughts on “Testing the Route”