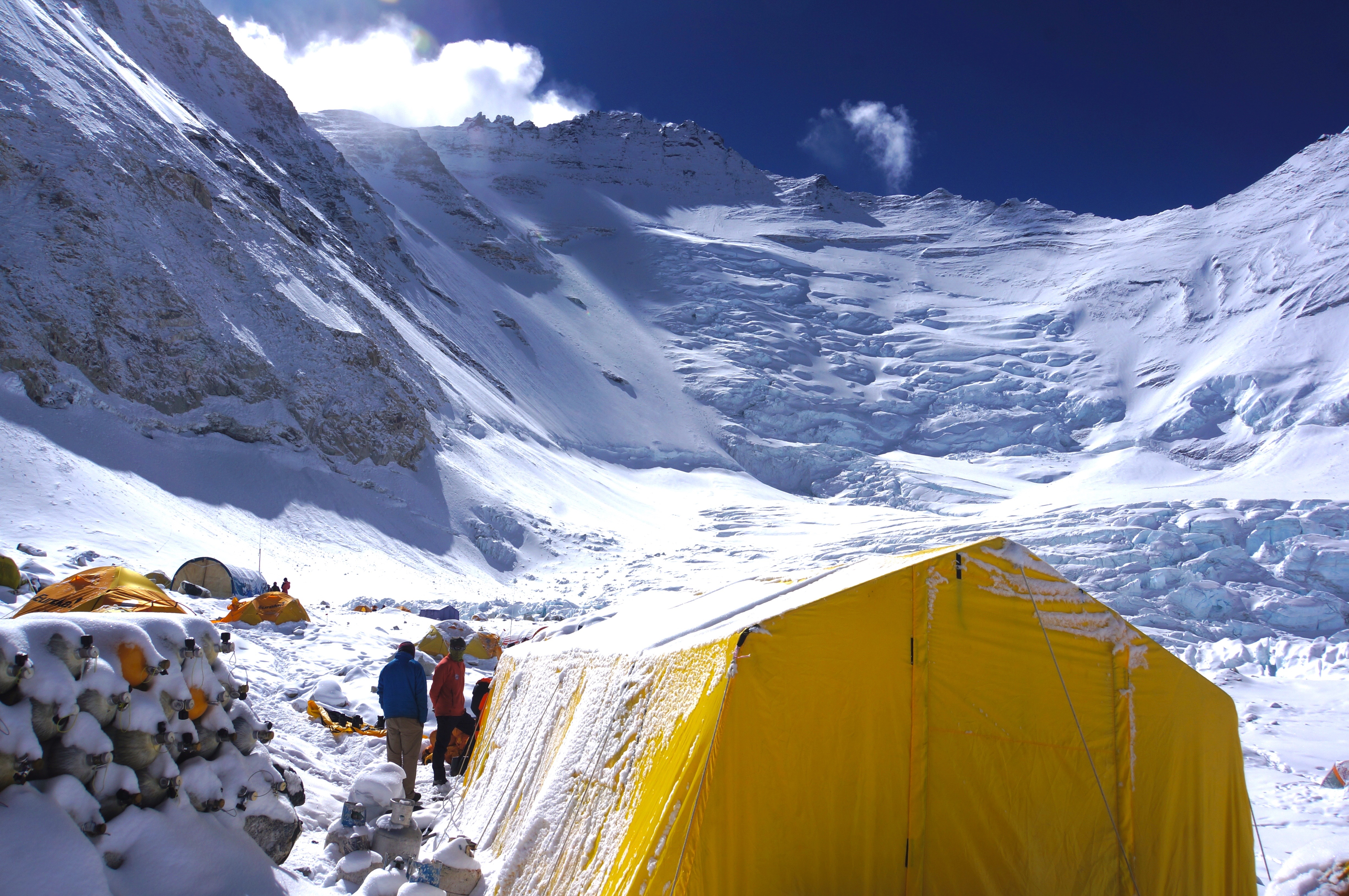 The day after the quake was filled with uncertainty.  Information from EBC and C1 came our way via radio, and we listened intently.  It was still impossible to grasp what had happened below, but clearly things were bad.  Injured climbers in EBC who had survived the night needed helivac to Pheriche or Kathmandu, and lots of preparation was going on getting things ready for these flights.  We had no hard numbers, and certainly no true sense of the horrible night that our friends had endured at EBC.  Just as we had discussed the prior evening, the best thing for us to do was to sit tight.  We had planned on two nights at C2 in the first place, so we were well-supplied, healthy, and in no rush to descend.  In fact, we had no way of knowing whether the route below was passable.  The word for the day was going to be “patience.”

Morning clouds burned off to reveal a dazzling, blinding world of pure blue sky above and fresh powder snow below our feet.  Lhotse looked very different cloaked in white: more beautiful, clean, and benign than it had from C1.  Our yellow tents stood out in sharp contrast to the pure snow, the jet black basalt of Everest’s West Ridge, and the intense blue of the hanging glaciers.  We pulled folding chairs out of the dining tent and lined them up on the snow, facing down the valley, and took in the incredible views.  There was little to do but sit, wait, and watch the cwm and the modest activity at C2.  We were at the top of the established route, but looking up at Lhotse we could see where C3 was supposed to be.  The face is very steep, and very austere.  And, we all felt the same way: We can do this.

Another meeting was held at our camp with guides from other teams.  We learned that a climber with HAPE on another expedition needed to be evacuated, as did our Sherpa porter with the knee injury.  Once cloud cover reduced, choppers began to arrive from down-valley.  We watched them quietly as they arrived, one at a time.  They emerged from the clouds below, flew over at a steep angle, then settled a couple hundred meters away behind some low seracs.  Listening to the radio chatter, I thought I knew which bird was for our Sherpa, and sent him to the LZ as the chopper arrived.  It took him longer to hobble over with assistance than I had anticipated, and I was aghast that the chopper left without him.  In fact, another climber was evacuated on that flight, and soon thereafter a helicopter arrived for our Sherpa, and all was sorted.  At this elevation, choppers only bring down one climber at a time.

Once our teammate was safely on his way, everyone smiled and attempted to relax.  But, anxiety and confusion were undercurrents that could not be ignored.  One rumor that I found particularly disconcerting: two Sherpas from another expedition who were trying to reestablish the route to C1 developed HAPE on the way down, leaving them trapped above an impassable crevasse, calling for helivac.  Then, word that they had been longlined down.  To this day I have no idea whether this story is true, but I doubt it. Mountaineering is always full of rumors, incomplete stories, or inaccurate information, and this situation was no different.  However, we had the benefit of team leadership that was working hard on our behalf, and we knew that eventually all would be clarified.  We could always trust information coming from IMG… everything else was suspect.

The biggest question: How will we get down?  The quake had probably caused the seracs to shift in in the icefall.  Building a safe route up had taken the icefall doctors weeks.  Would this process need to be repeated?  One of our amazing guides, Justin, joined two other guides from other teams at C1 and together they tried to make their way down.  All of this was totally out of sight from C2, so we waited and waited for news of their progress.  At some point in the early afternoon we felt an aftershock: Just a brief jot and shake, but enough to convince everyone that reestablishing the route through the icefall would not be safe.  We knew Justin was in there, and worried about him for a moment, until his safety was confirmed via radio.  It sure sounded like walking down was out of the questions, at least for now.

After lunch we pulled our thin sleeping mats out of our tents and laid in the dining tent, trying to rest and buoy each others spirits.  But the bare stone floor was incredibly cold, and when cloud cover returned the dining tent became too cold for comfort, so we retreated to our own tents and sleeping bags.  Hard to describe what those hours were like… Physically we were fine, though a bit tired while living at 21,300 feet.  But, mentally, we were shrouded in questions and doubts.  How will we descend?  And, most importantly… Will we return?  My teammates, being smarter and more insightful than I by far, seemed to understand that this was the end.  But I simply could not believe that the expedition was over.  I kept assessing our situation in my mind and out loud.  I am fine.  We are fine.  The upper mountain is fine.  This will be fine.

During the dinner briefing, our plan became clear: We would rise early, have a very quick breakfast, then head down to C1.  The route had been found passable by other teams that day, although it had not been fully scouted directly by IMG, and so there were some unknowns.  We would travel in roped glacier style, in case of crevasse fall (which is not generally an issue on the route through the cwm, but with the route untested there was no reason to take any chances).  From there we would be evacuated to EBC by helicopter if conditions were favorable.  If not, we would wait at C1 for as long as necessary.

We spent the afternoon and evening getting our kit packed up.  Some gear would be left behind, exactly as planned, for our return a few days later.  But, essential survival gear would go down with us, in case we got stuck at C1 in rotten weather.  I filled a stuff sack with things I thought I would not need again until the next rotation: Summit mitts.  A bunch of high-calorie snacks.  My favorite Patagonia long sleeve zip tee.  My custom-knit monogrammed Wapiti Woolies hat.  My amazing orange Ibex merino wool boxer-briefs.  My GoalZero solar panel.