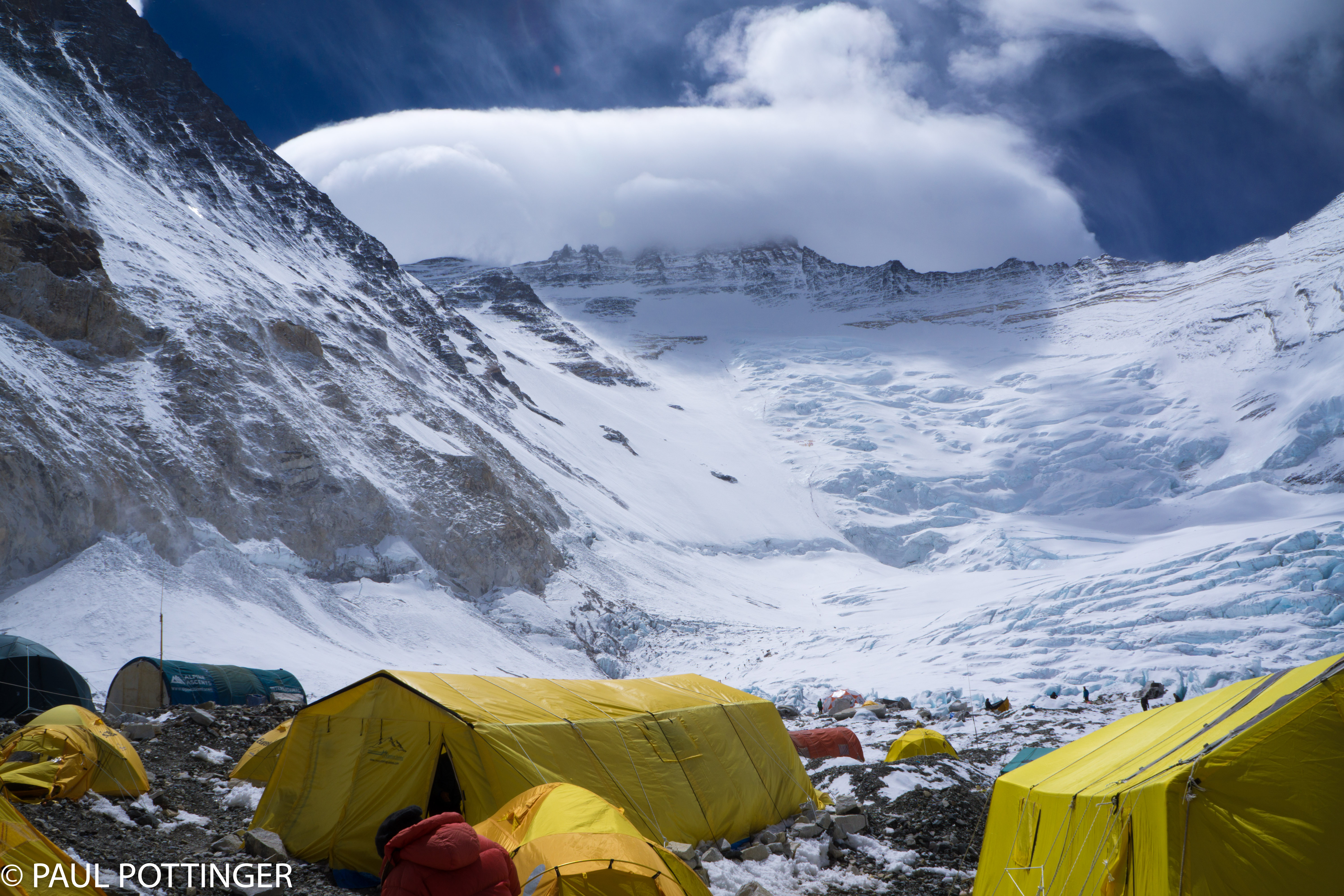 Cold temperatures, low winds, and clear skies greeted us in the morning.  I had hoped for some cloud cover to spare us from cooking in the solar oven of the Cwm, but it was not meant to be.  No worries, we got moving early enough to avoid the brunt of the sunshine.  We should top the rollers before the sun hits.  It is what it is.

I looked back at Camp 1 for the last time.  It struck me as tiny, spartan, and exposed in every sense.  And crazy beautiful.  I memorized the views one more time, quickly.  I will never come here again.

Because it was late in the season, we were able to enjoy established steps up the roller faces… in fact, in some cases, the steps were so worn that they had cut trenches in the snow up to 4 feet deep, which was a pain in terms of getting my trekking pole up and over.  Yes, although it may seem odd, we use our poles on the Cwm, where they help alleviate the drudgery of marching hour after hour.  When we come to vertical terrain or ladders, the easy thing to do is to stash the poles quickly across the small of our backs, between our jackets and the underside of our packs.  Works great… unless you are trying to ascend a deep snow trench cut by your predecessors.

I performed well.  I was genuinely surprised when the sixth and final roller face came and went so quickly.  So much easier than last time.  As hoped, the sun did not hit the bottom of the Cwm until the moment I gained the top of the last roller.  Now just cruise.  I was relaxed, and my lungs felt good.  In fact, this was by far the most pleasant of the four trips I have made up the Cwm.  The final 30 minutes walking through camp to IMG’s home were perfectly fine—nothing like the agony of last time, when I needed to be revived with hot tea and relieved of my backpack just to make the last steps to my tent.  Holy cow, I must have been really sick last time.

We settled into camp without difficulty.  Cristiano and I were glad to share a tent.  He seems to know everyone on the mountain, and it was fun to meet climbers from around the globe who came to pay him a visit.

Our job at Camp 2 was to rest, eat, and prepare to move up… when conditions allowed.  Our guides were in touch constantly with Greg at EBC, who was receiving and digesting weather forecasts at least twice a day, from at least two independent sources.  The day we arrived was favorable for climbing up higher, and our friends form the classic team ascended that day to Camp 3.  We knew that there would be wind the following day, 5/17/16, but it was predicted to quit shortly after sunrise, meaning the Classics would be able to ascend to the South Col that morning, then summit 24 hours later.

At least, that was the plan.  In fact, the wind up high accelerated on 5/17 to a constant gale-force howl, and stayed that way well past noon.  For us at Camp 2, everything was peachy, including nice sunshine and very little wind.  But, high above on the Lhotse Face, it looked grim.  Everest and Lhotse were capped by lenticular clouds, indicating high wind velocities. We did not need to see those clouds, however, to know that things were bad up there.  In the background of all our conversations, above all else that happened that day, I remember hearing the deep, terrifying roar of the jet stream as it slammed into the summit of Everest.

Over the radio their guide, Johnny Schrock, remained totally calm, cool, and collected as he reported the situation and coordinated the plan.  The tents were being destroyed, and replacement parts would be necessary after the storm… one extra fly had already been deployed successfully, but more would be needed.  They were running out of food, and staying an additional night at Camp 3 would ideally mean getting resupply, if the winds allowed that to happen.  They had enough fuel to melt more snow, but later that we learned the wind was too strong to allow the stoves to be used, because they would blow out immediately… this meant no fresh water could be made until the winds stopped, a real issue when dehydration happens quickly up high.  At least they had enough oxygen stockpiled to get them through another night.  We shook our heads and shuddered at the thought of what they were going through.  Ultimately, the wind did die down, but hours later than had been predicted.  The plan to stay up there for a second night and move higher the next morning was ultimately changed because of concern for avvy risk: snowfall had not been too heavy, but wind loading was a worry.  Thus, late that afternoon, our weary friends began to arrive back at Camp 2.  Holy cow, they looked beaten up.  Coming down was clearly the right choice: Now, they could rest for a few days and regain their strength for another attempt.

That meant that we were up next.  5/18  would be our final rest day, and we would leave before sunrise on 5/19.  This put us on track to summit on 5/21, the same date we’d had in mind for some time now.  Weather was predicted to be favorable through 5/22, so all systems were go.

Was I anxious?  You bet.  But, I was even more eager to see the upper mountain, and to give this a shot.  My lungs felt good.  Conditions were favorable.  The roar from the summit had ceased.  My family was with me.  Our team was as prepared as seemed humanly possible.  I tried to sleep that night, but per usual my mind was spinning too much to allow meaningful rest.  The next time you will be here, you will have stood on the summit.  Or not….  Just stay focused and stay safe.

Mantra of the night: You can do it.