Our agenda was simple: Train for the upcoming Ecuador expedition. Someplace close to home. Someplace quiet. Someplace challenging. Someplace not overrun with hipster d-bags. This may sound like a tall order, but we have a secret weapon: Teresa, Queen of Logistics… Soothsayer of Occult Terrain… Keeper of Secret Routes. And thus, the genesis of our adventure: BOOTALICIOUS PEAK. Mostly unheard of, rarely discussed, virtually unclimbed. Purrrrrrrrfect.

True, the weather was predicted to be grody, with heavy fog in the area, but that is no issue for us. We thought it auspicious, and might help ward off other interlopers from our adventure.

In fact, that it did. That it did indeed. Not a single other hiker did we see all day.

First, these woods are haunted. Or stalked by serial killers. Or both.

Second, the fog. Did I mention that?

Let me show you….

After leaving the cars (with some regret, engendered by the overwhelming creepiness of the scenery) we marched for a couple miles along Bessemer Road, a logging road closed to motorized traffic. But, apparently not closed to serial killers… at least, that was our conclusion upon discovering two perfectly preserved, laceless leather boots in the middle of the road. Filled with moss (and no feet… we checked). This truly was BOOTalicious. Or perhaps they belonged to Big Foot? Had a moonshiner heard the authorities and run from his still for hills? Hilarious / terrifying.

From there, the road continued until it intersected with a creek, which we promptly crossed. We knew that the best trail peeled off soon after the creek… but where? No proper trails to be found here, let’s poke around in the trees a bit more….

“Hey,” Chris said, “Is this a toy? A Tonka truck?” He rooted about in the rotting leaves and revealed an oddly-shaped piece of tan plastic.

“Yeah,” I agreed, “both the souls of damned and the innocent. Very versatile.”

He said, “I guess the souls go in here.”

“Yep. That’s the SoulHole.” And thus, a hashtag was born. #SoulHole. You are welcome.

There was a trailhead near the SoulHole, but it went impossibly steeply up a slick, muddy face. No way could that be the intended trail, but just to be sure let’s check the GPS… yep, Gaia shows the intersection a bit farther over… here we so. (Little did we realize, dear reader, that the proper trail is indeed marked by the SoulHole, defended perfectly by that steep muddy incline… by far the steepest section of the entire trail. The tall trees interfered with our GPS reliability… and thus we began the day off-route.)

Up we went, into a silent world of old-growth stumps, beautiful needle carpet underfoot, enchanting ferns… and, soon enough, no discernible trail. It looked like the proper way up was on climber’s right, but a steep creek filled with alders blocked our path. The solution: Climb higher, and bear right ASAP. Thus, the seduction of the unknown, an imaginary route that never materialized, and terrain that grew ever steeper. The creek became a cataract, and eventually cliffed out. There was no way but to go LEFT towards a different trail that appeared on our maps.

Fine. Or, not. We needed to cross a couloir full of alders and cold water… only to find a dense thicket of alders on the other side, flanking steep, wet, slippery granite. And if the alders were not bad enough, the mud here was severe. Mud? More like quicksand. More like Lindsay Graham puckering up to the Orange Goon on a Saturday Night: It really SUCKED. At one point, while trying to clamber up a dripping-wet grantie face, I felt my foot begin to sink. I looked down… and there it went, my boot disappearing beneath a layer of brown ooze, resisting my desperate tugging to get it out again. I instantly thought of Ross Perot, and said, “Hey Guys! You know that sucking sound you hear? It’s not our jobs going to Mexico….” Eventually the muck did give up the booty, so to speak. Each of us found our way up independently, always in hollering distance of the others, though shrouded in cloying fog.

Our reward? An abandoned road, littered with more alders, apparently not touched by human influence in decades. But, passable. In fact, we soon found an intersecting trail that would, eventually, come close to linking up with the intended route. My mantra became, “All trails lead to the summit.” In large sections of the upper mountain, the trail was actually in great shape, and took us through charming second-growth forests with soft dirt underfoot. This part of the hike was fun. 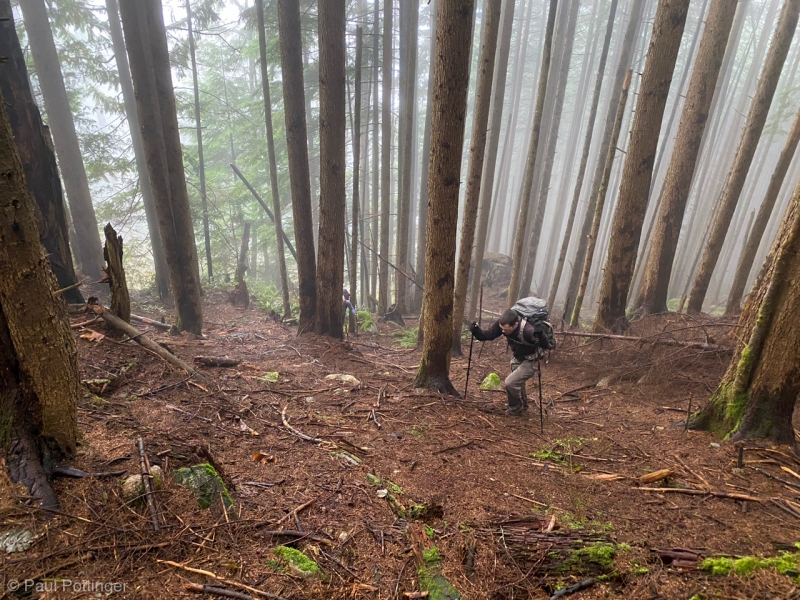 So, too, was the moment we broke out from the woods and gained the upper section of the forest road we had left behind all those hours ago. Like all forest roads this one was wide, easy, and headed towards the top in a meandering way that will drive all hikers crazy. But, eventually, we reached the literal end of the line: The road stopped cold at the edge of a massive boulder field. To our left, rare glimpses of Cascades, hidden mostly in thick cloud. Ahead: Suggestions of an upper mountain which we could not see. Per topo, we knew that our objective was about 700 vertical feet above, and perhaps half a horizontal mile away. Can’s see it? No worries. Just follow your nose to the top.

Up the boulders we went. Easy scrambling… seductively easy… much easier-looking than crossing a treeline to climber’s left. Why not just gain the summit ridge and then ridge-climb to the top?

Because it is impossible, that is why. Because slide alders blanket every square meter of the upper mountain, thickest along the ridge… hidden from view by dense conifers, only to be revealed when we were upon them. Those of you who have climbed in the Cascades are well acquainted with the slide alder… but, I hope, not as acquainted as we became that day. Intimately acquainted. Branches probed for any holes they could find. Nostrils… tear ducts… yes, the nether regions, too. Slippery with moisture from the fog, and angled down the slope at a wicked, man-killing angle. Occasionally, it was interrupted by devil’s club, or poison sumac, or wet smooth granite clad in breakaway sheets of moss, but mostly there was just more and more alder. The good news here was that a handful of them was certain to protect against falling backwards down the face, because they were rooted so deeply. I trusted them like I would trust a bolted route on 5th class terrain.

At one point while I paused to catch my breath, a beautiful pair of birds alighted just out of reach. They nibbled on alder buds without a care in the world. Stout and mighty, they looked almost like parrots, although I suspect they belonged to the finch family. Often, they roosted next to each other, looking like lovebirds. A nice respite from the work at hand.

The ridge was literally defended from assault by these alders. At least, I thought of them in military terms. Chris had a different idea: This was Gaia attempting to cross-breed with humans. His perspective is understandable, because the alders literally ripped his pants off. Various body cavities were probed deeply, and intimately, by the alders. Why they preferred Chris, we will never know. He decided that if he delivered children through some unconscionable mechanism, he would name them Alder and Hemlock. Thus, his proposed name for this peak which I greatly prefer: AlderSex.

The hour was growing late—it was past 1 PM and we still had a few hundred feet of ridge to negotiate. Turn for home? NEVER. Bootalicious would give it up for us… press on we did, until the proper route revealed itself: A wide, beautiful boulder field on the East side of the mountain, the way we should have ascended in the first place. If we had known it existed, we would have done that.

Lovely views awaited us. A short break at the summit, quick change into dry top layer, and we were off again. This descent would be easier than the way up (it could not possible be harder), due mostly to the wisdom we had gained in the prior hours.

Down we went, into the fog, into the gloaming, into the night. It was so dark that we needed headlamps by 4:30 PM. It mattered not. All that mattered was the car… and Rhodies Smokin’ Barbeque thereafter.

You may have questions. Questions such as, “Why do you do this?” “Should I climb Bootalicious?” “Is Beyonce really there?” And, “WTF?”

Our replies: “You will probably not understand why we do this, because we ourselves do not understand.” And, “No.” And, “No, not that we have seen.” And, again, “We cannot explain.”

Was it painful? Sure. Did it “suck”? Yeah. But, truthfully, I have not laughed so hard in a long time. This was a hilarious, profane, knee-crushing, crotch-thwapping, sufferfest. And we loved it.