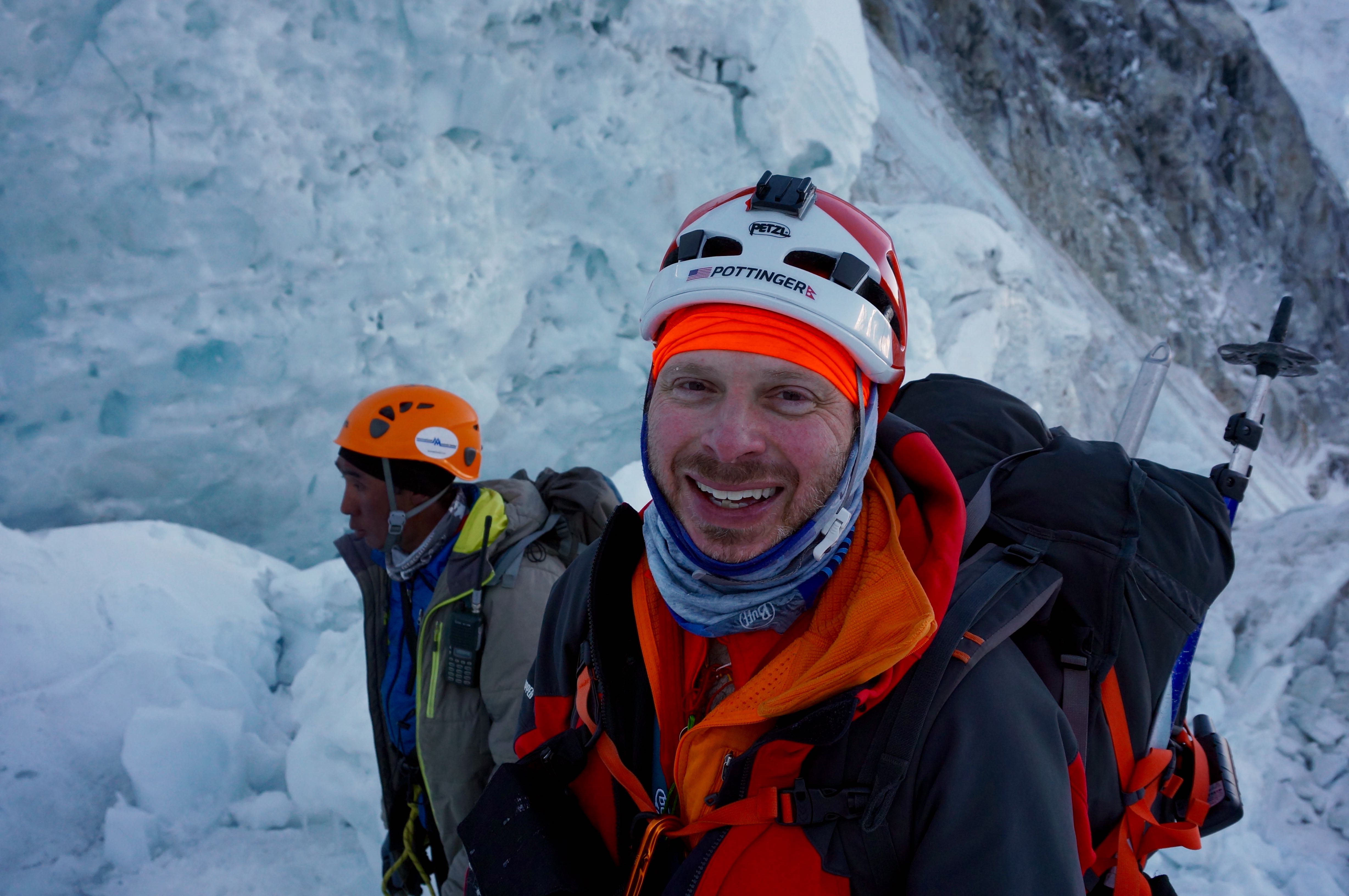 The route through yesterday’s collapse was repaired circa 9 AM…. We really made the right choice by turning around!  Today’s plan was identical to yesterday’s: Walk out of camp at 2:30 AM, head up the icefall, and make it to Camp 1 a short time after the sun hits the glacier.  Based on how good I felt yesterday, this seemed like a piece of cake.  Plenty to eat, early to bed, alarm set for 1 AM.

Everest is many things, but never boring.  For the first time, I had a truly terrible night: At midnight I awoke with a start, full of the feeling that I was dying.  My breathing raced out of control.  My heart pounded and knocked in my chest, going a mile a minute.  My vision deteriorated: Even though it was pitch black, I was blinded by a billion purple scintillating worms eating my vision.  You are hyperventilating.  You are hypoventilating.  It’s HAPE.  You are having an MI.  It’s a panic attack.  I could not reason through this, could not pin a proper diagnosis… all I knew was that I was dying.

In a fit of desperation, I flung open the rear door, unzipped the rear vestibule fly, and crawled out through it onto the glacier floor—in my sweatshirt and underwear—and breathed in the deep, clear, frozen air.  Breathe.  A billion, trillion stars greeted me above.  I felt sweat pour out of my scalp and wick along my hair until it evaporated into the night.  Breathe.  Within moments my vital signs improved, my vision stabilized, and the sensation of doom receded.  My core began to freeze, and I crawled back into my tent, to the warm moisture of my two sleeping bags and three sleeping mats, and tried to recoup some sleep for less than an hour until the alarm sounded.  I still do not know what this was about, but suspect that I had insufficient venting in the tent, allowing my pCO2 to rise to unpleasant levels.  Alternatively, this may have been a panic attack, but if so I cannot explain why things got so much better as soon as I left he tent.

Regardless, a short time later it was time to leave.  A lovely birthday celebration awaited be in the meal tent, including a miniature chocolate bar and a well-rehearsed rendition of Happy Birthday.  I was really touched by this.  Then a quick breakfast, few last details, and we were off.  Showering the puja altar with rice, watching the juniper boughs smoke, I realized that this was not at all as nice a night as the last.  Still clear, which is great, but the Withering Wind hand returned.  Breathing through the buff should help to reduce the cough, but there’s no way to fool those airways: they know the frigid, desiccated blast when it comes.  Breathing deeply with movement is generally ok, but stopping for a break brings on deep, irresistible rumblings of mucus that must go: coughing spasms made more unpleasant because of the injury to my right intercostal muscles.  I find that pushing with my hand against the ribcage helps to splint it, and reduces the pain substantially.  But, I still cough and cough at breaks, and my sinuses still become packed with copious, thick, dark, tenacious, bloody mucus.  Just get through this, and keep moving.

Pasang Kami took the lead, I worked hard to keep pace, and Justin swept.  We made a good team of three.  After my shabby showing at the end of the last rotation, I was eager to show myself and the others that I could keep up the pace—and I did.  It was a cold, difficult morning, but I made it in plenty of time.

The section that had collapsed yesterday was complicated.  In my understanding, we were looking at revisions to the route both below and above the Pit.  Walking through fresh icefall is creepy, with table-sized features that shift subtly underfoot.  We resolved to get through these areas very swiftly.

Above the headwall, blazing sunshine and the promise of camp just half an hour away.  Negotiating the crevasses here involves walking in a serpentine fashion, along snow fins and between chasms, and this took a toll on me.  I was first into camp 1, but I had to leave an hour early to manage it, and when we pulled in I felt tired, hungry, and dehydrated.  And, of course, the coughing spasms came hard.  Camp 1 has grown since I was here last, with new tents pitched to make room for waves of climbers.  This means that there was a tent to spare for me to inhabit alone, a blessing that would spare my teammates from having to put up with a sickly tent mate.

Of interest, several of the tents were festooned with laminated posters for “Anzac Day… Lest we Forget.”  Later I learned the meaning of Anzac Day (it commemorates the sacrifice of Aussie service men who died senselessly in WWI—think Gallipoli—and by extension all Aussie veterans), but at the time it was mysterious and the source of considerable conjecture.

I managed to pull myself together over the ensuing hours, but the bloody sputum just kept on coming in spasmodic waves.  I would end up with a mouthful of discharge, and nowhere to put it but the poor rear vestibule, which began to resemble a Jackson Pollack painting (did he have a crimson phase?)  I resolved to build a new vestibule floor before we leave for Camp 2 tomorrow.  Just a few hours of rest and I will be fine…. Not necessarily my favorite birthday, but one hell of a way to celebrate turning 48.

Concept of the day: Respect your Eders… and your Mucus Membranes.