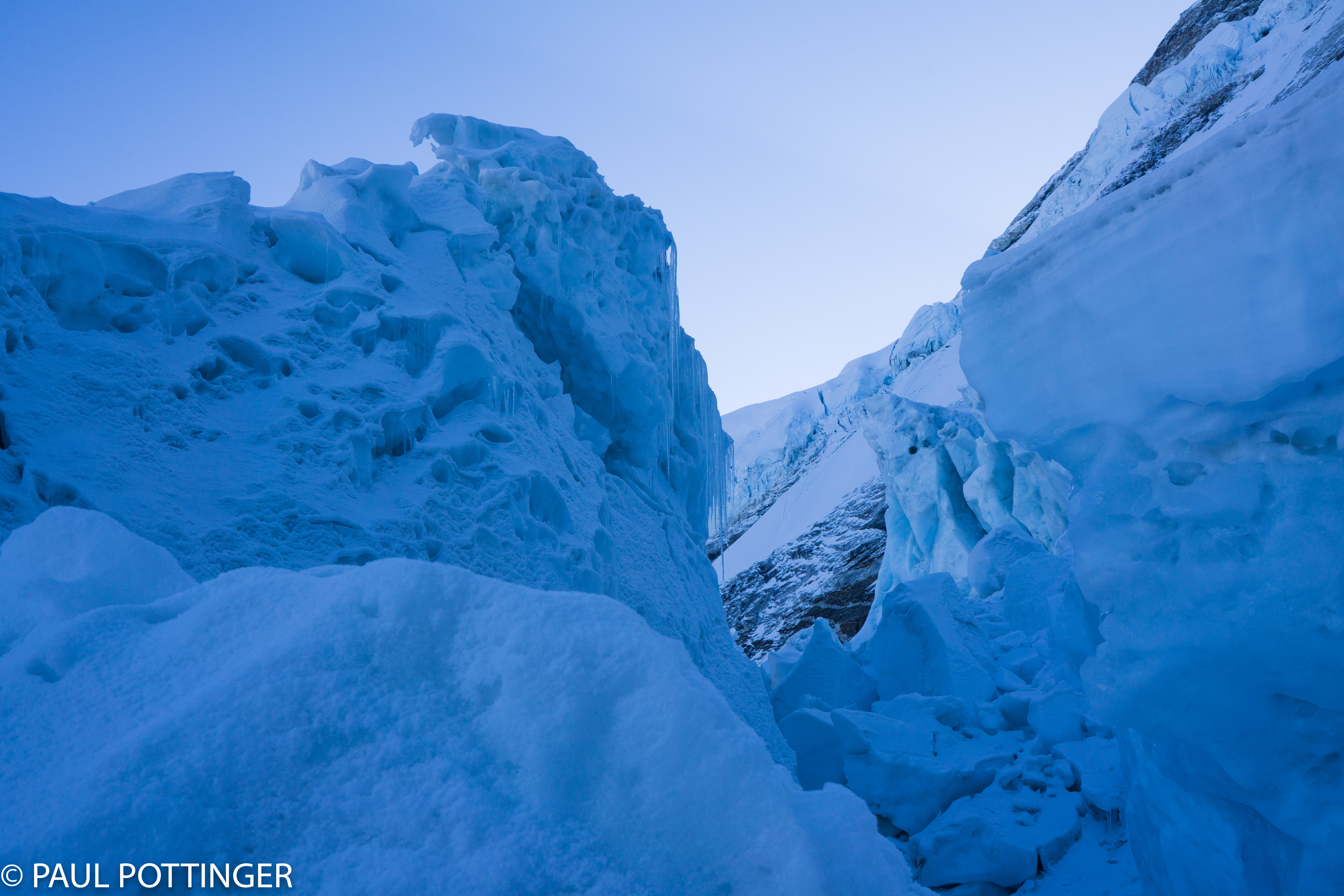 The alarm did not need to sound that night—I was already awake at 1 AM.  The usual details needed tending-to in the tent, including a last text message to Julie, and then I was out the door.  As I sealed the tent, I took one last look at the postcard hanging from the ceiling, our annual greeting card for 2015, a collage of photos of the family.  I watch this card in the beam of my headlamp every night as I fall asleep, marveling at our children.  This time will be no different.  You’ll be back in a week.  I wondered how I would feel when I returned: tired but victorious, or beaten and utterly dejected?

Sniffing the air at EBC, we seemed to have fine conditions for climbing the icefall: just a touch of the Withering Wind, some katabatics, and clear skies.  Let’s do this.

I did well in the icefall, and felt much stronger than last time. I was pleased with the performance of two new pieces of kit I picked up in Namche: first, a lightweight silk balaclava that hangs loosely over my nose and mouth, providing some warmth and re-capture of exhaled moisture without feeling too tight.  Second, a highly insulated Camelbak hydration pack… sounds like madness, as everyone knows these will freeze in winter conditions, but Bob and Nicky and I decided this system looked tough enough to give it a go (provided we start with scalding water, and wear the system under our shells right next to the body).

Initially it looked like we would have minimal traffic, with just seven headlamps countable on the route above.  But, more and more folks appeared from behind us as we made our way through the glacier.  Many were our friends from IMG on different sub-teams, and others were from totally separate expeditions.  “Justin, what are all these people doing on our mountain?  Didn’t they get the memo that we reserved it for tonight?”

“We’ll be alright.”  This is Justin’s 17th Himalayan expedition, and he is shooting for his seventh summit.  He really has seen it all up here.

And of course Justin was right, we were fine.  Lots of constipation at the toilet bowl, including some climbers who just could not seem to get their act together, but beyond that things opened up just fine. I was able to make good progress, in fact one of my faster ascents.  By the time we topped out on the headwall it was just after 7 AM, meaning about 4.5 hours through the icefall, which is fine.  Just conserve your energy dude, this rotation is all about the summit.

One the way up, in the Sea of Destruction, I was surprised to hear someone call my name from above: it was my lovely buddy Mary Scannell descending with her crew from Jagged Globe.  Everyone looks incognito on Everest, but I really had trouble recognizing Mary.  She is a beautiful woman who looked… worked over by the summit.  But, her spirit and energy were irrepressible, and we had a quick chat on the lines.  I had not realized they were pinned at the South Col in a windstorm for more than a day after reaching the summit–this explained why I had not seen them descending the prior day.  No time for details, but it certainly sounded hairy up there. I was so impressed with her, with their entire team, and I focused on my happiness for them rather than the horrors of what it must have been like for them up there.  Quick hug and we were each off in opposite directions.

Camp 1 was washed in beautiful, glorious, flesh-frying sunshine.  We made it.  Time to relax.

I was amazed to think back to my last time here, when I painted the snow red and green with bloody sputum.  Now, I had no cough at all.  The satellite text I sent Julie says it all: “Speedy, solid icefall climb… Hope it’s my last icefall ascent. Relaxing day at Camp 1; Spartan but beautiful, and fine weather. Fit & well.”

One of the best parts of this rotation turned out to be climbing with our buddies from the “classic” IMG team, which allowed us to get to know them better.  Previously we had been on a staggered schedule, but now everyone’s acclimatization was on even footing, and the weather dictated when we would leave as a larger group.  Fun to chat with these buddies, new and old.

Justin set about improving camp, meaning dealing with the latrine situation: It had become hopelessly overfull, and needed to be replaced.  By the time he was done, we had a brand-spanking-new hole in the snow, complete with a privacy / wind barrier.

The clouds taunted us, staying just out of range from providing shade.  So, we sweltered in our tents and on the common ground outside, wishing for cover.  And, of course, when the shade finally came it brought sub-zero temperatures that sent us running to stitch up the tents and dive into our big down bags.

Life at Camp 1 is simple: just tents in the snow, like you’d find on most any mountain expedition.  Usually I think of this as being uncomfortable, but on this rotation it almost seemed like a fresh break from all the cush treatment we’d gotten on the way up.  Almost… I admit that while I was eating my cheese tortellini MRE I missed the fine cooking we get at EBC and Camp 2.

Concept of the day: All systems go.