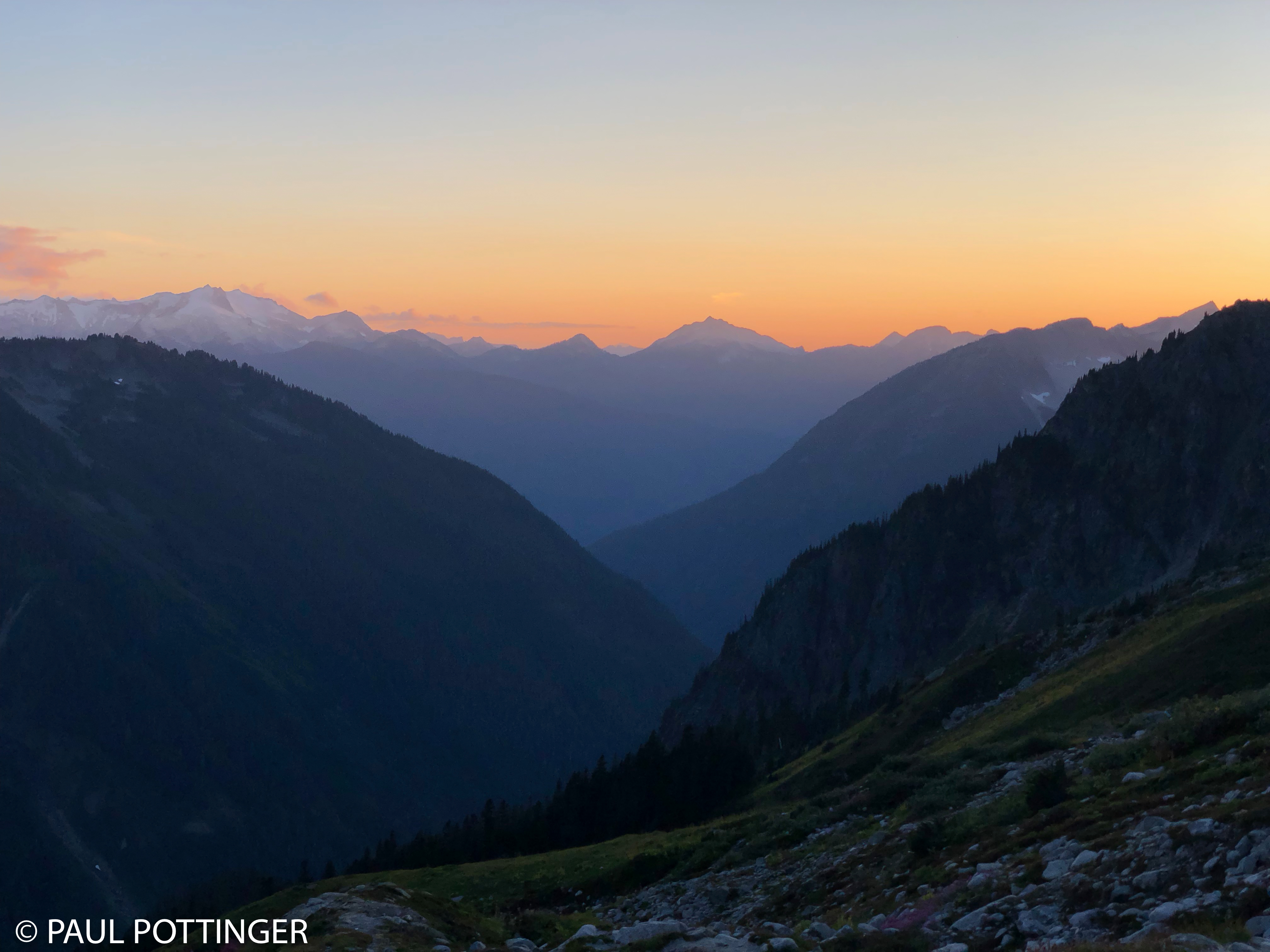 “Paul – JM and I had a good dinner and talked about some fun climbs in the PNW next summer, namely the north or east ridge of forbidden – Justin I forget which one. Anyhow would you be able to join? I would be able to go late August. 3-4 day trip. Thoughts?”

And thus began a seven-month odyssey of dreaming, scheming, planning, preparing, and ultimately fulfilling her proposal: Climbing Forbidden Peak via the North Ridge with Ann Sparks and Justin Merle.

I had tried to climb Forbidden’s West Ridge in October 2015 with buddies John and Tom, but we were thwarted by rockfall just below the col and cold, wet, cloudy conditions. I knew nothing about the North Ridge, but I understood that Forbidden is a serious mountain that is appropriately named. Climbing it would push my skills to their limits, and would be impossible without such an incredible team: I knew Ann’s strength firsthand because we had climbed some 14ers and steep ice in Colorado, and Justin had shown his skills getting me safely up and down Everest.

I was totally excited to try to pull this off.

The trip was threatened at all turns, mostly by our conflicting schedules. Even when the calendars aligned, everyone seemed to get injured during the runup:  Justin broke his ribs in a mountainbike crash… Ann sustained a monstrous hematoma on her thigh after falling on a talus field on Snowmass…and I thwapped my calf on a canoe bench a couple days prior to departure. Plus, due to work and family obligations, I could not train and sleep beforehand as I would have liked. This route would require long hours, so banking rest beforehand can make a real difference. Two weeks earlier I had attempted Challenger with John and Tom while exhausted, and there was no way in hell I could have done it safely even if the rain had not forced us to spin. It was time to invest in new boots: LS Trango Cubes felt great in the shop, but would I get blisters on the route? I did not have an easy way to apply ToughFoot daily, my usual protocol when wearing new boots. Finally, the question of mountain conditions remained: September in the PNW may be plagued by wind and rain, and this year the entire region seemed to be consumed by wildfires. It was not until several days before departure that our fortune seemed to turn:

Ann flew to Seattle on Sunday, arriving several hours after we returned from the East Coast, and we went to dinner for a last meal of “real” food before the coming days of dehy and GORP.

After dinner we ran our kits. Justin had already given us very detailed instructions, even beyond the standard IMG list for trips in the North Cascades. His bottom line: We had to come in below 35 lbs each, including full water bottles, so that we could haul our shares of the group gear to Boston Basin on day 1, up and over Sharkfin Tower on day 2, then to the summit of Forbidden on day 3, and all the way out on day 4.

All of which came to 31 lbs in the pack.

Our food needed to be hauled in bear canisters provided by the NPS because of the “five black bears” in Boston Basin. Ursacks would work too, though we did not have any. On top of this we would haul some group gear, such as MSR Reactor and cells, or part of the rack. Justin always carried the rope.

Off to bed, and up at 5:00 AM, rolling by 6:00 so we could meet Justin at Marblemount and get things settled with the NPS. The rangers were super helpful and friendly, as always.

The Cascade River Road leads from Marblemount, past El Dorado, and up to the Boston Basin trailhead. Cascade Pass is apparently just a few minutes farther up the road.

The hike to Boston Basin was beautiful. Last time I was here, three years earlier, we had started before dawn, miles down the road due to a washout, in cold overcast conditions. This time it was hot, (but not oppressive) and the views were stunning and breezy. I was delighted to bump into some trainees from the hospital on their way down who recognized me immediately, even in my mountain garb. The only other party we met all day was also on their way down after tagging the top via the West Ridge, and we discovered mutual friends as well. The biomedical-mountaineering axis runs strong in the PNW. They warned us of having to chase a curious bear away earlier in the day, which made me thankful for the canister I had squeezed into the pack.

The bivvy site was immaculate, even came with a composting toilet. Justin made a killer Thai dinner. We had the entire Basin to ourselves, with sweeping views in all directions, from Johannesburg to Sahale to Boston to Forbidden to Torment, and down the valley towards the sunset. Only a small amount of wildfire smoke was noticeable before nightfall. Just before we fell asleep, a small flock of ptarmigans strolled right through camp, making creepy / adorable chirping sounds.

I fell asleep thinking of my family, and of Sharkfin tower which was our objective for the next day. And I thought, This will be awesome.