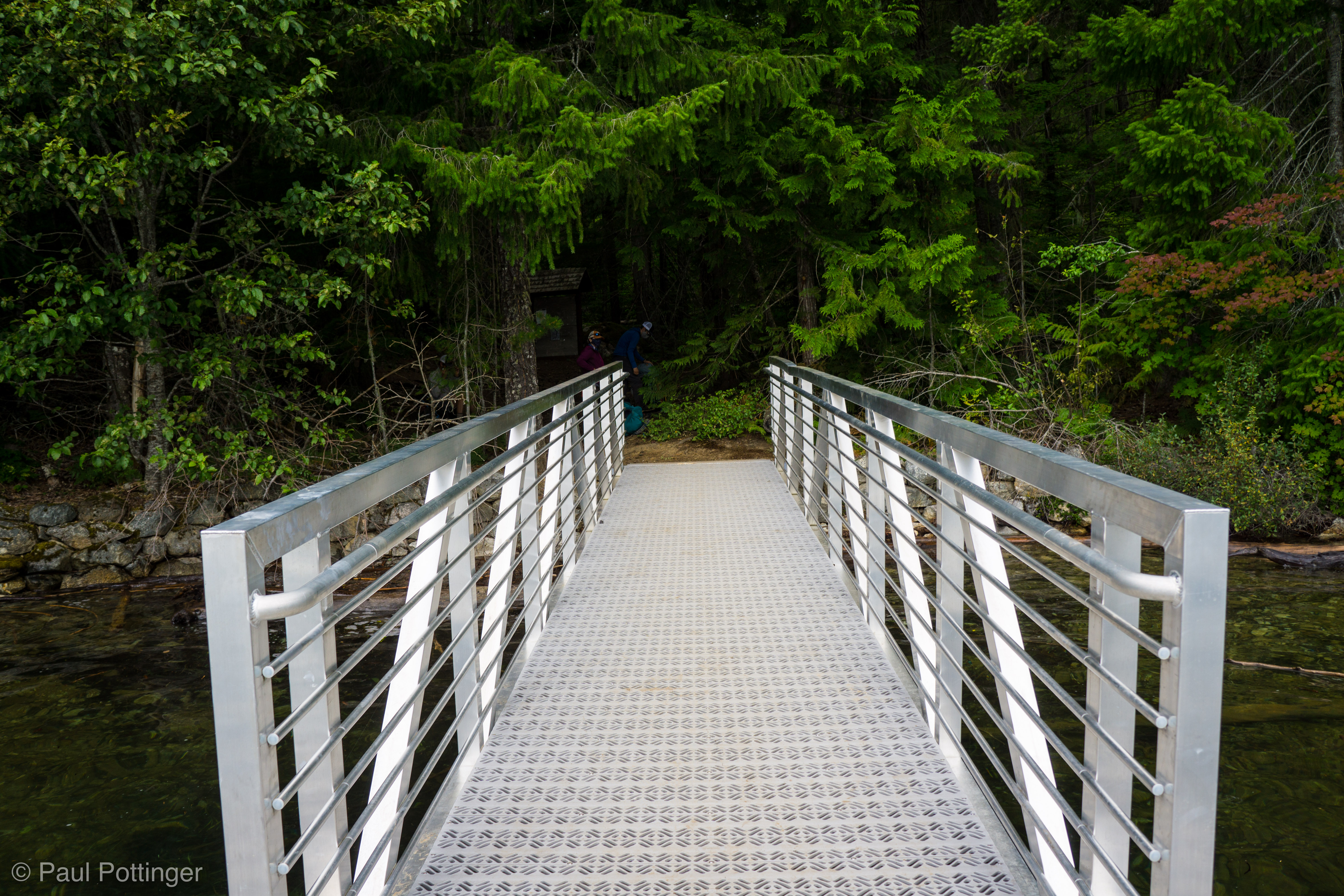 Our Plan: For our annual PNW trip, Justin, Ann, and I would Climb Challenger via Big Beaver. I had tried twice from the Hannigan side, and had been skunked by the weather both times. My buddies John and Tom had actually tried THREE times and had not made it.  We swore that we would never try it again unless we had five days and a perfect weather forecast. And, surely, Big Beaver was the ticket. This would be a new route and new mountain for all three of us, so adding the route finding aspect to this trip would make it more “epic.”

Our Reality: COVID-19 made travel to Seattle unsafe for Ann. This was such a disappointment, especially after she had already missed a shot at Everest for the same reason.

Our New Plan: Invite another amazing friend to join us: Teresa (AKA T$). IMG has a rigorous infection prevention protocol that I approve of. This could be done safely.

T$’s Answer: She was IN and super psyched to climb with us!

T$’s Reality: Injured in a hit-and-run car wreck some weeks before. Carrying a heavy pack for $50 miles, with thousands of feet of vert gain and loss would have been a mistake.

Our Synthesis: Bring a second IMG guide to help share the load. Forrest fit the bill, and was eager to climb for the first time in the Pickets, too. We had five days. The forecast was perfect except for that pesky fourth day which looked like rain… no worries, that should be on our way down, anyhow. THIS WAS HAPPENING.

A video synopsis of the first day: 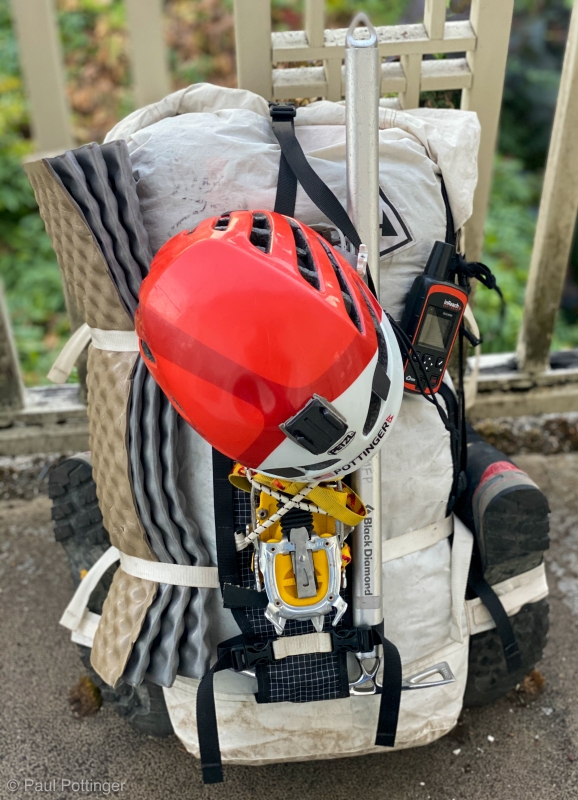 We met Justin and Forrest at the Marblemount RS at 7 AM Monday. I have been there many times… never have I seen a line at 7 AM. But, today there was indeed a line of people waiting to register. One poor Ranger was stationed under a tarp, part of the new COVID-19 austerity. These strategies really work, and I am glad to see them taking this seriously. T$ and I had done the same, wearing masks and riding with the windows open all the way from Seattle. Anyhow, while waiting our turn we did a quick gear check and ate our mega-burritos for breakfast. I could trim a few odds and ends, and picked up a couple tiny times of shared gear, but basically my fate was sealed at 44.8#. This was my first expedition since Ecuador in January 2020, and I knew it would hurt, so the goal had been to come in under 40#. I just could not make it happen.

Quick work getting registered, and it turned out that there was one other party registered to be in the Challenger Basin at the same time as us, although we did not know whether they would approach via Hannigan. We loaded the cars and caravanned up to the Ross Lake Trailhead, where we secured the vehicles, saddled up, and started auspiciously downhill towards the water taxi landing.

The taxi driver was awesome, and gave us some beta on the quick trip to Big Beaver TH. He had taken one other party up that way a couple days ago, but by LITTLE Beaver. It sounded as though we might have this side to ourselves. “Challenger? Yeah, almost nobody climbs it. It’s not that hard of a mountain, I think.” We knew this was a single pitch of 5th class climbing, so there is no doubt the pyramid would be “not that hard.” The question is, can you survive the approach? As we zipped along in the speedboat, we passed scenic campsites on locations such as Cougar Island (“Ann would have loved it here!”) People were fishing, canoeing, kayaking… lounging in the sun. And I thought, That’s not a bad option, actually. But, as always, we had chosen the path of pain.

This day is pretty straightforward: March “12 miles” to Beaver Pass, on a maintained trail, to an established campsite about 2,000 vert higher. And, it truly was spectacular. Just, incredibly beautiful, so reminiscent of the Hoh, but without other humans (we saw a single party of teenagers on their way back down, unclear where they had been but certainly not off-trail like us.) There were so many beautiful features, such as a meadow surrounded by beaver-chewed trees, and every teeny-tiny baby toad on the planet crossing our path on their way to the water (we called it The Toadening). The issues are: Firstly, according to Gaia it was closer to 15 miles, not 12. Secondly, man, it was a hot, heavy, buggy approach. SO MANY BUGS it was DAFT. The only worse place I have encountered is the Boundary Waters. This was by FAR the most buggy I have come across in the PNW. They did not bite every time, but wow they were aggravating. And, it was a hard day for me. I chose to ascend in Altra LonePeak trail runners, with my Trango Cubes lashed to the pack, and it was a reasonable decision. But holy moly those LonePeaks have a soft, supple sole that did me no favors with such a heavy load. Plus, I am too heavy myself now (Covid-Bod) and it was too much to ask of the poor trail runners to keep my feet from feeling like clay. And, no matter how much I drank I could not keep up with the sweat output, and as often happens I fell behind in my calorie intake. With less than 2 miles to go before camp, on the final section that is slightly uphill, I just had to take an unscheduled break. #sad.

By the time we pulled in to the Stock Camp (human camp was booked, although I suspected empty), I felt baked. Or, at least, nicely toasted. Dinner was my usual first night special: cold Margherita pizza from Cafe Lago. (No shared cuisine this trip as part of COVID-19 prevention bundle). It was really good… although I could not finish all my pizza crusts, a bad sign for my calorie intake. Anyway, a beautiful if mad-buggy camp, with great people, and clear skies shaded by majestic trees. I slept pretty soundly in the QuarterDome lent to me by T$. And I thought of our next day’s tasK: Bushwhacking > 2,000 feet up a dense slope of forest to the mountain proper. This would be our crux, our hard day. And I already felt so tired! Let’s see if sleep will make everything better….