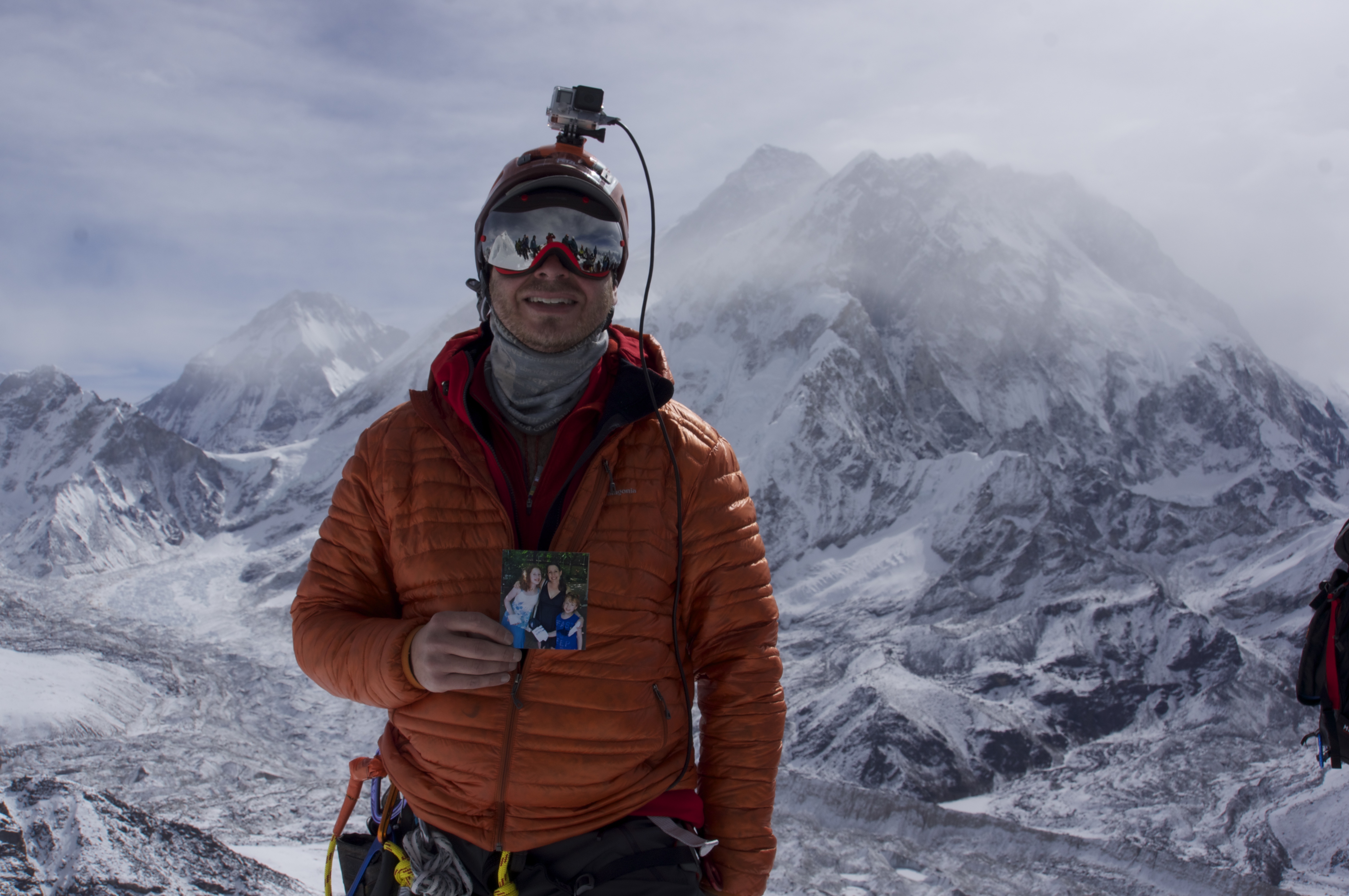 The weather looked good the following day for another summit attempt, so once again we gorged ourselves on a super lunch and then humped back up to Lobuche high camp—for the third time.  We were loaded for bear, eager to knock this one off and turn our attention to Everest herself.

Favorable conditions marked our trip to LHC, and we had plenty of energy to burn, as evidenced by the snow “person” built by team members with a much more… creative flair… than I could ever hope to muster.

Again, to bed early.  Again, fueled by sherpa stew for dinner, and then eggs and porridge for 2:30 AM breakfast.  The idea is to summit early, so that the route is not too hot and sloppy on the way down.  Plus, this helps us avoid the clouds and prices that often happen in the afternoon.

Walking at 4 AM, just as planned.  Beautiful conditions, with clear skies, a billion stars, a crescent moon on the rise, and virtually no wind.  Cold, but no too much.

Up, up, up Lobuche.  We had studied the route carefully for days, and I thought I could predict what things would look like in real life.  Wrong again… the mountain was much bigger and steeper than I had imagined.  Just under 3,000 feet of gain is NOT a big deal at home, but at this elevation I certainly felt it.  Even a simple mantle move over a small rock band would just about lay me flat out panting for breath.  In some sections it was possible to get into a good rhythm, but often the conditions were varied enough that I had to vary my gait and breathing from step to step.  Good practice for the big E.

As the sun rose, marvelous views of the Khubu valley opened up.  Pheriche, Lobuche, Gorak Shep, and EBC all came into view below.  The Everest massif stood just across the valley, capped with a lenticular cloud that belied severe winds aloft.  This is Himalayan climbing!

Sunrise also revealed a number of other climbers from different parties on the route, above and below us.  We were making great time, but had to cool it while other teams cleared the fixed lines above us.  There were often two ropes, including one of super high quality placed earlier by IMG sherpas, but we did not get “dibs” on this important resource.  Again, great training for E.

Steep terrain, soft powder to the mid-shin, light winds, ever-intensifying sunshine, some folks from other outfits with less experience or confidence on the lines… the morning had it all.  And, in the end, we topped out in just over 4.5 hours.  Our goal had been 6 hours, so this was super.  Happy celebrations at the summit for everyone, and special thoughts for me of home and my family, the reason I climb in the first place.  Frustratingly, no cell signal at the summit, though I did send a message via SPOT beacon.

I also used this climb as a chance to test out some new gear, including my Mt Everest Edition Barkeater goggles, which performed beautifully, as well as running my go pro 4K on helmet using a body-mounted battery charger, which worked fine but needs a bit more tweaking.

Of course, the summit is just halfway home, and we needed to descend safely.  We got ready for the drop VERY quickly, in order to avoid getting stuck behind the same folks who had held us back on the way up.  Still, there were plenty of folks headed upwards as we went down, which gave us a great chance to practice passing people on the fixed lines.  Steep and deep, we had nice conditions for plunge-stepping and arm-rapping.  Of course, the sun emerged from behind Everest to blaze down on us, and the temperature shot through the roof.  By the time we reached high camp I felt like a rat drowning in its own sweat.  Juice and snacks awaited us, as well as a brief rest to organize our kits before the final drop to LBC 45 minutes below.  Pulling in there felt like a great victory, made even sweeter by the absence of other climbers in camp, meaning we got our own private tent for the night.  I slept soundly, and happily.

See our summit and descent here:

1 thought on “Lobuche the Right Way”