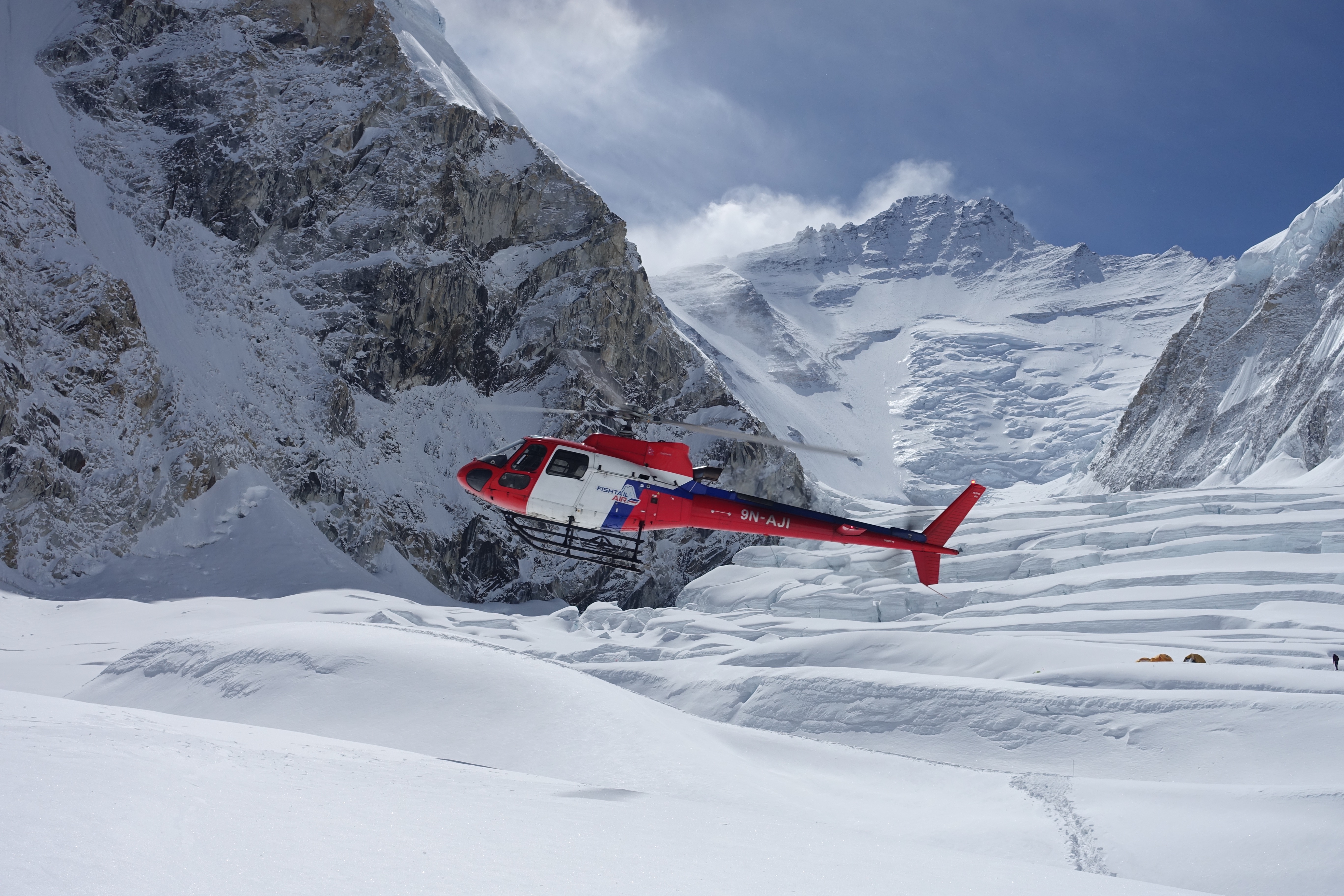 I slept poorly that night, thinking about the next morning’s move to C1.  How would conditions be on the glacier?  Would we find the crevasses impassable?  Would the weather hold and allow us to fly to EBC?

It was bitterly cold when we woke up.  Hasty last minute packing, a very quick breakfast, and we prepared to move out.  Katabatic winds rolled down the Lhotse face, and in the early shadows the cwm stood in deep shades of blue and grey.  I was glad to climb in my down suit for the first time—awkward, but warm.

Safe glacier travel involves tying in to a rope with other teammates, so that if one plunges through an snow bridge into a crevasse, the others can arrest the fall and prevent (or minimize) injury.  It is one of the most basic skills in mountaineering, and I am 100% comfortable with this technique, having walked this way too many times to count.  But, never in the great western cwm after an earthquake.  Tensions were a bit high all around that morning as we lined up and prepared to leave.  I was delighted to tie in behind Jangbu Sherpa, one of the strongest, most accomplished mountaineers on earth.  Jangbu is famous for holding the world record for going topless on the summit of Everest for almost 5 minutes (which is hard to understand or imagine), and he has summited Everest 11 times.  The Google street-view camera is a big, tall, awkward, heavy device, precisely the same as what you have seen bolted to the roof of a car—and Jangbu was the man selected to carry it back down from C2 that morning.  The light was no good, and besides, this portion of the route had already been photographed… thus, the lenses were shrouded in a protective cloth “shower cap” of sorts.

Funny thing: We rarely travel in traditional roped style on Everest, because most of the route is fixed with static lines.  That morning, everyone at C2 had to come down, all at once, which was virtually unheard of.  Thus, there simply was not enough climbing rope to go around.  Instead, we made do with some extra static line.  Climbing rope is “dynamic,” meaning it stretches under strain and cushions a fall.  Static rope does not have this property: No elastic core, no protective kernmantle, just a woven synthetic cable, such as you might find on a row boat.  It is cheap, strong, and adequate for fixed lines, but you would never choose it for a roped travel.  Unless it’s all you had.

Once we started moving, everything settled into the familiar rhythm of glacier travel: Keep the axe in self arrest position… watch for crevasses… mind the rope… move as a team.  To reduce shock loading in case of a fall, the rope is kept almost fully stretched out between climbers, leaving each body in a gentle arc that hits the snow about 4 feet ahead or behind.  This is totally different from the way we move on a fixed line, where climbers can be much closer, so some of our Nepalese teammates were unaccustomed to the spacing required here.  But they picked it up quickly, and we moved well.  The distance passed by quickly.  I cannot recall how long the journey lasted, but just about two hours sounds right.

I was relieved to pull into C1, which felt familiar and was in perfect order.  In the sunshine, with a gentle wind, it was possible to get out of the down suit and into more comfortable climbing clothes.  We dropped some of our bulkier gear into rice bags at camp, including down suits and sleeping bags.  Then walked downhill for perhaps 200 meters to the LZ, where we were reunited with our buddies who had been at C1 during the quake, and thus had not been able to climb higher to join us.

The LZ consisted of two spots in the snow that our friends had tramped flat with their boots.  An impromptu waiting area had been designated a short distance away from each LZ, both filled with climbers and their Sherpa team mates, approximately 50 people in total whom I saw that morning.  The riot of brightly colored backpacks and down clothing looked like a clearance sale at REI.  We joined the group and took in the views: Above, the cwm we had just descended.  Below, the icefall and beyond it (out of view) EBC.  The stark ridge of Pumori stood out against the blue sky, pure white and razor-sharp.

Then, the helicopters began to arrive.  They developed a nice traffic pattern, flying up next to Nuptse, touching down briefly at the LZ to pick up pairs of climbers, then pitching down over the Khumbu next to Everest’s West Shoulder.  Three helicopters were involved, and we got to know them by their livery and by their pilots’ individual style.  The A3 choppers are almost miraculous, with remarkable flight capabilities at these altitudes.  In fact, a heavily modified version of one actually touched down on the summit a few years ago.  Still, very thin air even at C1’s 19,500 feet ASL, so we were limited to two passengers per sortie: a climber and Sherpa pair.  Each flight circuit took about 10 minutes, including the unloading and refueling time at EBC… clearly, there would be a long wait at the gate today!

When the first chopper arrived, many in the group surged ahead towards the LZ, and passenger traffic control became a bit of an issue.  As you can imagine, everyone wanted to get down, and with morning clouds swarming overhead, there was concern all around that the flights could be scrapped any time.  I could not understand why folks were pushing to the front, as we were clearly in for a long wait… so I laid down in the snow and tried to take a nap at the back of the line.  IMG guides were large and in charge of the chaos, and kept things in great order for members of all the groups up there.  A flight liaison officer ran coms and air traffic control… there was really nothing to do but wait.  Here are some lighthearted moments during this time:

Ironically, my number came up pretty early in the process, and within a couple of hours I was called up to the front.  I explained that I was happy to wait longer, but apparently this was the plan.  Pasang Kami and I walked a short distance to the staging area, where we knelt in the snow with Emily Johnston, one of our wonderful guides, and another pair of climbers from a different team.  Up came the chopper, operated by Fishtail Air.  I got out my GoPro and recorded the evac, which you can see below.

The two-minute flight was… memorable.  I was stunned to climb aboard and find no seats—of course, they had been removed to save weight.  No seats, no seatbelts either… just squat and watch Everest fall away beneath us.  As the icefall ripped by, I could not tell where the damage had happened; only in hindsight, with the video you see in slow-motion, is the route easily visible.  Similarly, once we flew over EBC, things looked normal overall to me.  However, on the video it is clear that a big chunk of central EBC was buried in avalanche snow… or blown away entirely.

Like everyone up there that day, I owe the brave pilot a tremendous debt of gratitude.  Without their efforts, the return to EBC would have been slow and perilous.  Thanks to them, we were dropped off at our tents 2,500 feet below in just 2 minutes.

Two helipads had been added to EBC, both in IMG’s camp.  One of them was almost directly on top of my tent (which had been collapsed to prevent it from blowing away), and the other was across a frozen tarn, maybe 100 meters away.  This is where Pasang Kami and I touched down.  Being back in camp felt profoundly strange: lots of new faces, commotion, and activity.  Many of our teammates had been at EBC during the quake, and they had clearly been working long hours down there ever since.  Everything ran like a well oiled machine, with climbers bringing fuel to refill the choppers between flights, and helping get climbers get out of the choppers quickly.  We made it back to the main helipad, and found Greg there, wearing his smile as always, which was amazing given the stressful circumstances.  He greeted us warmly.

“What did you do to my camp?” I asked, gesturing to the collapsed tents.

“We’ve been working, my man,” he shrugged.

“Yeah,” he grinned.  “Me too!  Thanks for hanging in there.  Get settled in.”  I wanted to collapse in my tent, but this was impossible, because it was covered in stones.

First, a quick call home to let Julie know I was safely back.  The kids were still awake, circa 10 PM in Seattle, and it was great to talk with them.  The first thing Matthew said was, “Dad, I’m so sorry you don’t get to climb Mt. Everest this year.”

“Hey, kiddo, we’re not done yet!  Everything is fine up here, and I’m eager to get back up there, soon as things settle down.”  The realities of our situation had not set in, and I was still all-systems-go for the summit.  I promised to keep in touch with them the next morning, as soon as we had more news.

Off to the dining tent I went, where hot tang and snacks were waiting.  After a short time I reemerged and tried to make myself useful, greeting our remaining teammates as they arrived.

Eventually the weather closed in, as it often did in the afternoon, and further flights were scrubbed.  All of our team made it down safely, as did just about everyone—if not everyone—from above EBC.  We later learned that this was by far the biggest helivac operation in Himalayan mountaineering history.

With flight operations on hold until morning, I could re-erect my tent.  I knew that some tents had been raided during the rescue efforts, in desperate search for sleeping bags or other survival gear, but mine seemed to have come through intact.  I would gladly have given up my kit to help anyone in need, but it was reassuring to know that my stuff was still my stuff.  I had a small stuff sack at C2 as intended, and a bigger one at C1 with my second sleeping bag and down suit, plus my axe and some other gear, but surely that stuff would come down in due time.

Mid afternoon, a team meeting was called.  We sat in the dining tent, and the news was shared: the expedition was over.  Our Sherpa teammates had to tend to their families and their homes, the icefall route was ruined, and even if all that was sorted out there was no guarantee of resupply from Kathmandu, where the airport was closed and the city was in shambles.  Hundreds—perhaps thousands—had lost their lives across Nepal.  I remember thinking, This is for the best.  This is how it must be.  Our quest seemed insignificant and unimportant in the midst of so much suffering.  As I went to sleep that night, I felt bitterly disappointed but also relieved… and terribly sad for everyone who had not been so fortunate.  Our colleagues from other expeditions were lost.  Our hosts, the Nepalese people, were in trouble once again, and once again it was no fault of their own.  It’s over, and there’s nothing we can do about it.  Hopefully we could do some good on the way out.