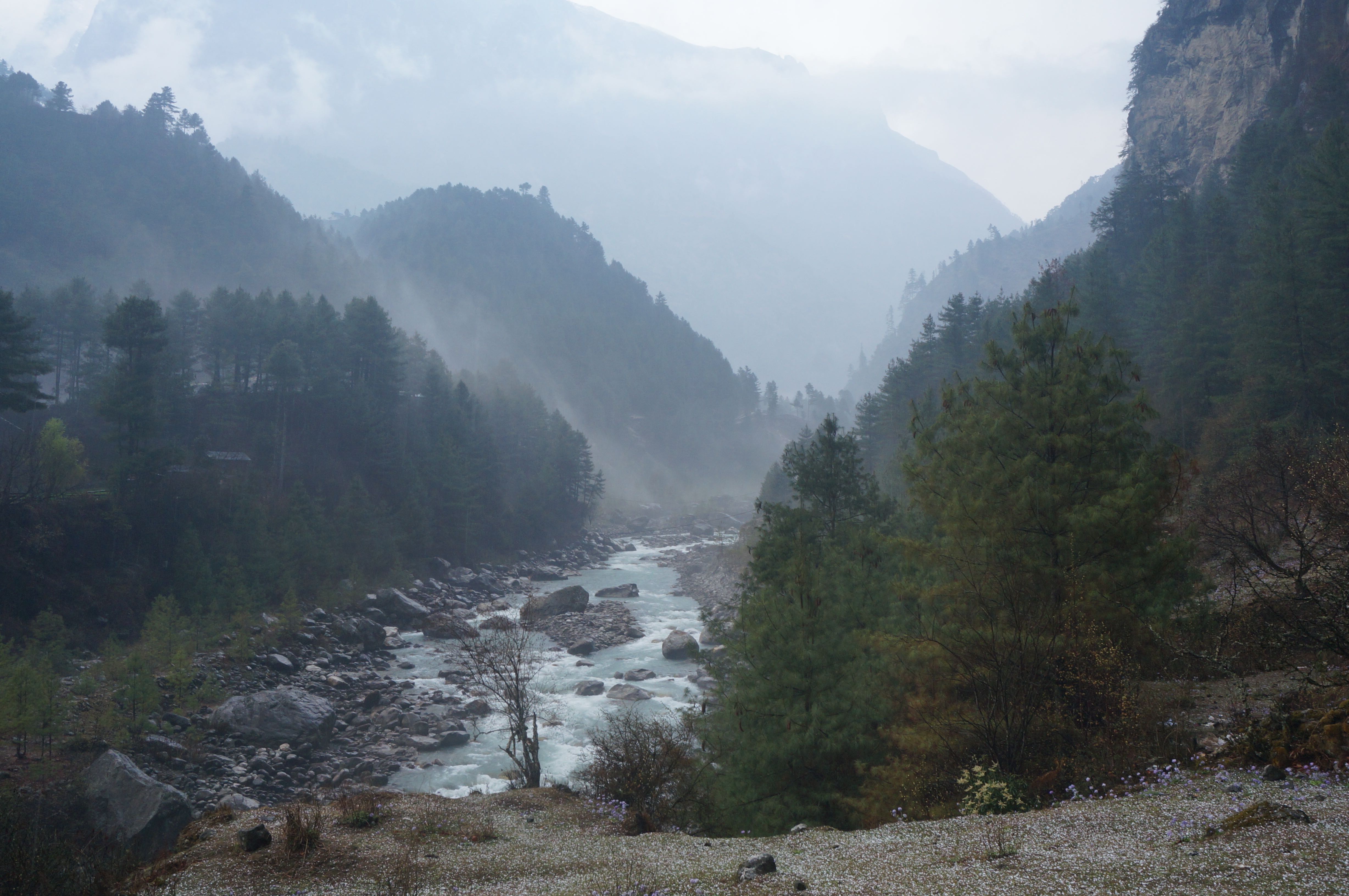 Back to Tribuvahn at first light  The airport was inexplicably virtually empty, a complete change from 24 hours earlier, and a real surprise considering how many flights had been cancelled.  We went straight through security and waited only a few minutes until we hopped into a pickup truck and drove across the airport to the helicopter area.  I was pretty sure our bird was the same one that brought Blake and Sonam down from Camp 1 during the evacuation last year.  A subsequent check of the tail number confirmed my suspicion. It seemed auspicious somehow to return in that chopper.

The weather in Kathmandu was dominated again by terrible air quality, and this dense smog persisted for a surprisingly long time during the 45 minute flight to Lukla.  Last year we had been treated to crystalline skies and the full sweep of the Himalayas.  This time we flew into a thick gloaming of brown soup that forced the pilot to thread a serpentine path between the hills, skimming a very short distance above the trees.  Finally, just before we reached Lukla, the mountains began to reveal themselves. 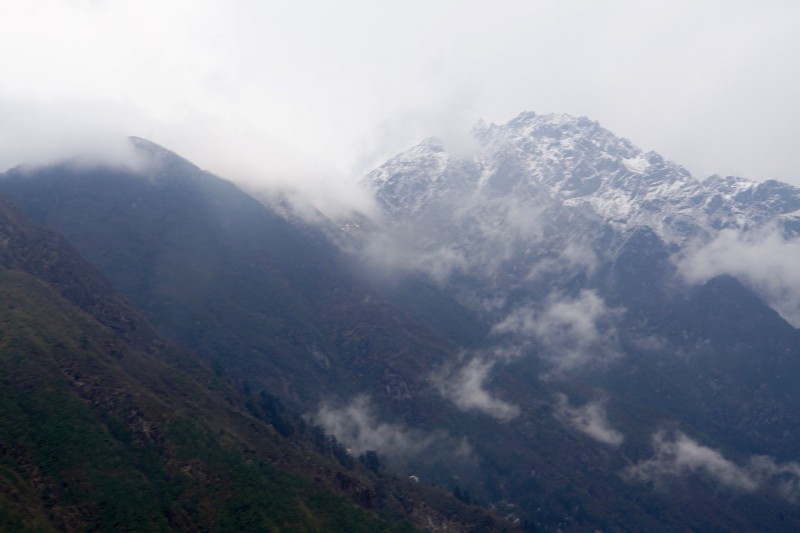 By the time we landed, I was profoundly happy.  Our friends greeted us right at the helicopter, including Tunang, Lakpah, and Mingma Tenzing.  It was wonderful to see our friends again after a year.

Lukla looked almost unchanged from the last time I had seen it on May 5, 2015.  Still bustling, still nestled under impressive peaks on all sides… but, there seemed to be fewer westerners milling about on the streets.  If this turns out to be true—and we are not sure yet—it would be a mixed finding.  On one hand, for selfish reasons, we like having smaller crowds.   But, on the other hand, tourism is the lifeblood of the Khumbu economy, and so we are hopeful that things will pick up… right after we reach EBC. 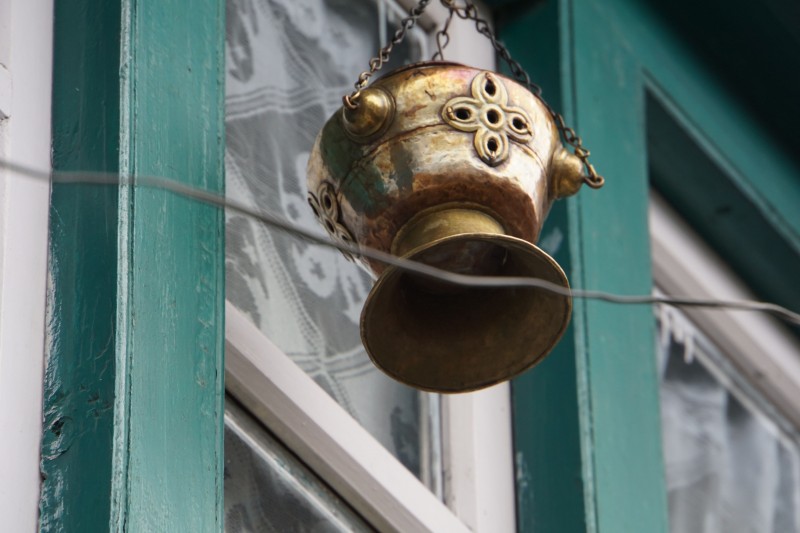 The beautiful valley was shrouded in mist, which was a huge blessing because it spared us from the sun’s heat.  However, it was a harbinger of some rough weather: Rain, rain, and more rain… and hail.  At one point we were pummeled with hail that stung like crazy, like a being blasted by a swarm of angry bees.  We made it to our lunch spot in Phak Ding and warmed up and tried to dry out a bit.

Phak Ding is the traditional sleeping spot for the first day, but we had started so early that we wanted to make more progress, and headed up valley another two hours to the village of Monjo.  Along the way I was impressed by the rebuilding that has happened in the last 11 months.  A few structures were still  ruined, but many others were either repaired or totally replaced. One technique I did not notice the prior year involves timber frame homes clad in thin grey steel: weatherproof, and not at risk of shaking apart in another quake. 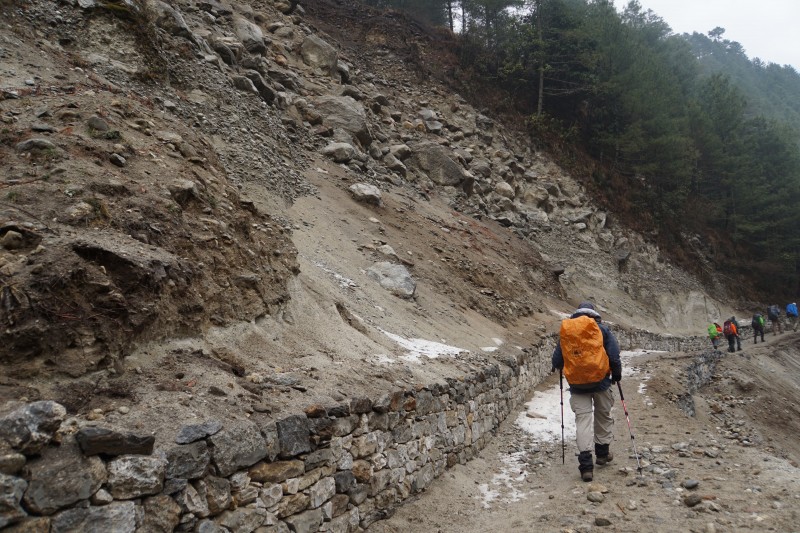 By the time we reached Monjo, we were cold, wet, and tired.  And yet… I felt so much stronger and more relaxed than last time.  Let’s see if this trend continues….

Word of the day: Fresh

9 thoughts on “Great to be Back”