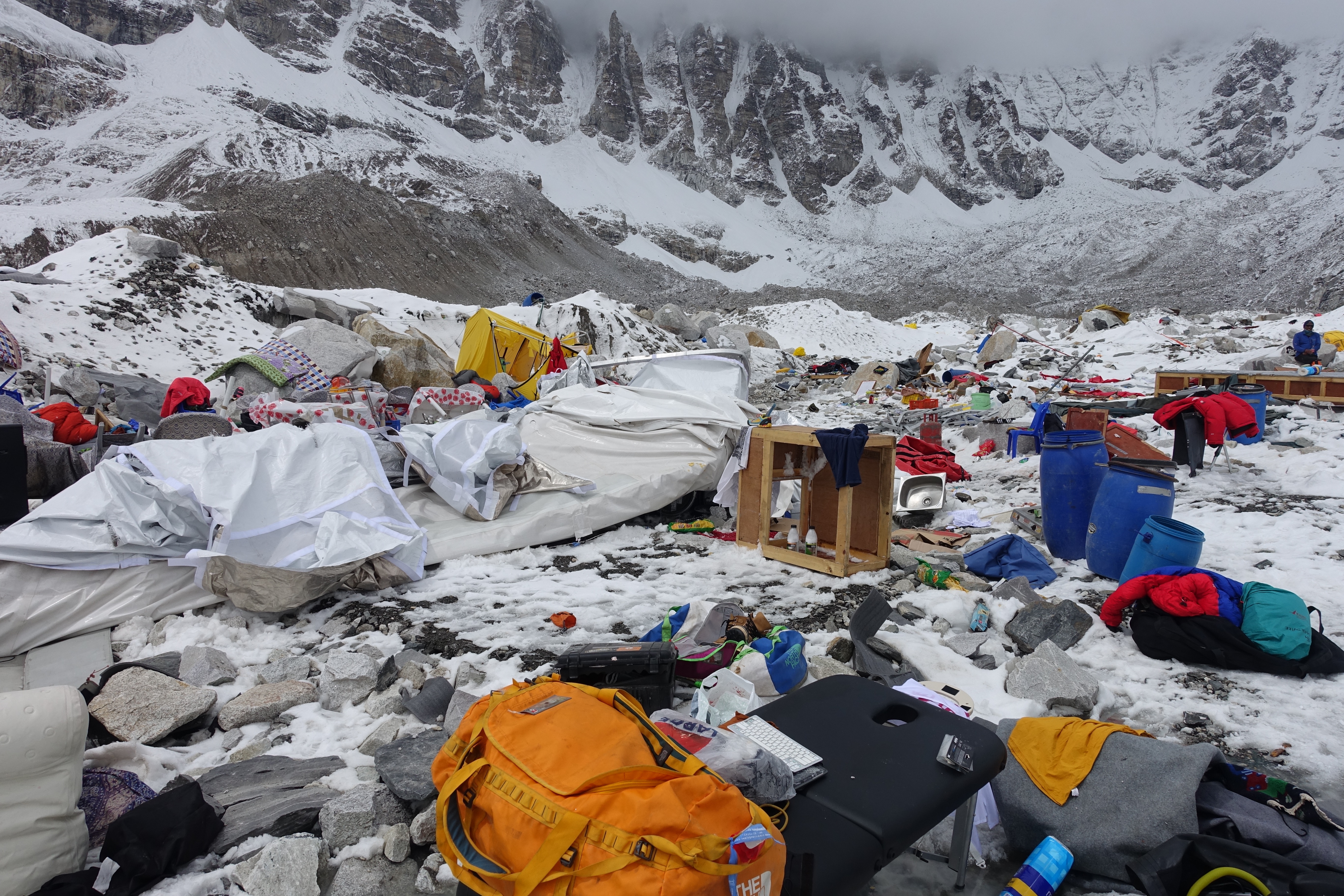 There was nothing for us to do except to prepare for the journey out the following day, which took very little time. The surge in demand for porters and yaks heading down valley simply could not be filled; one of our duffels would need to come down later—potentially weeks later—once the situation in the Khumbu had settled. So, one duffel needed to be packed away and left behind. All my beloved technical gear went in there… I knew I would see it again, but there was an odd melancholy about leaving it behind, kind of a sad reminder of our broken dreams.

Our job that day was to stay out of the way while the Sherpas did the hard work of striking camp and mounting a huge logistical effort on our behalf, ensuring that we were safe on the way down, and that we left the IMG basecamp site in pristine condition.

Kim, Blake, and I walked to the destroyed zone. From the helicopter the day before, zooming overhead, I had not been able to appreciate any real damage. And, our camp had not been struck. How bad could things be?

As we walked up valley from IMG, within ten minutes, it became clear that the central zone of EBC was utterly ruined. Nothing stood in place. Everything was ripped, shredded, smashed, and scattered. EBC looked like a garbage yard. Heavy steel poles used to frame large wall tents were bent at severe angles. Playing cards were everywhere, along with tattered papers, scraps of nylon, plastic bags… The images that came to mind were those of towns in the midwest flattened by tornadoes. Before, EBC had struck me as quite orderly and well tended, quite different from all the stories I had heard and read. Now, it truly was a litter heap. Cleaning it would be a huge effort. How long will it take to restore this site? 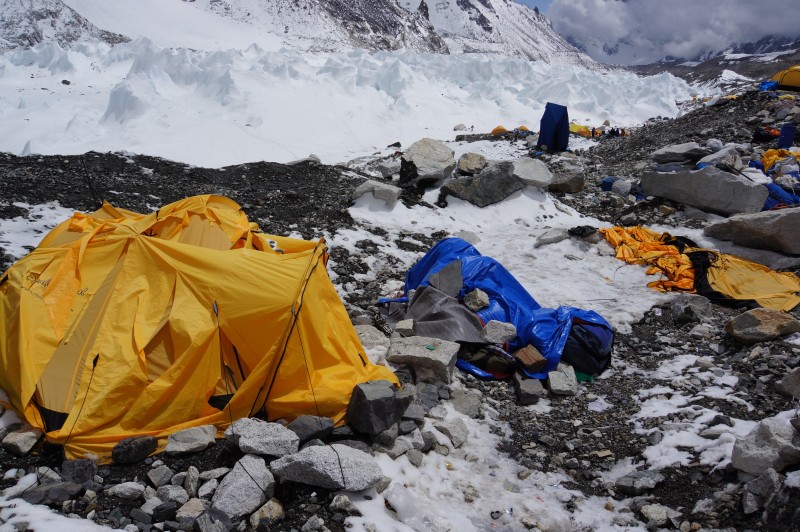 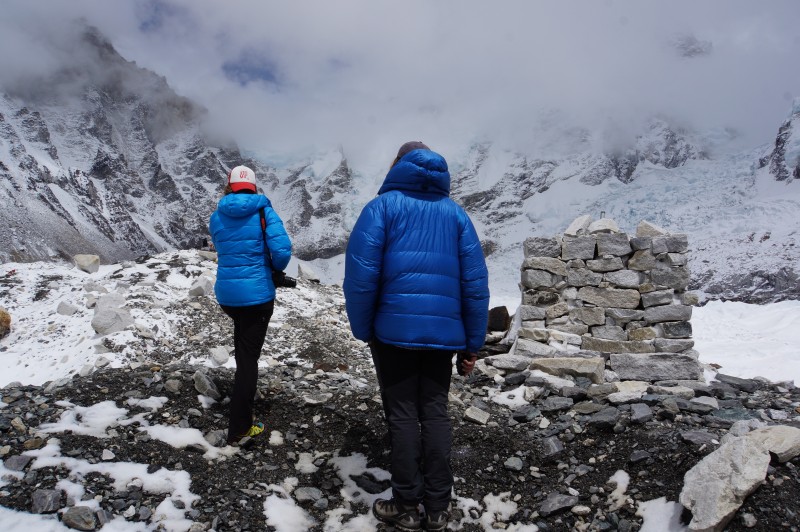 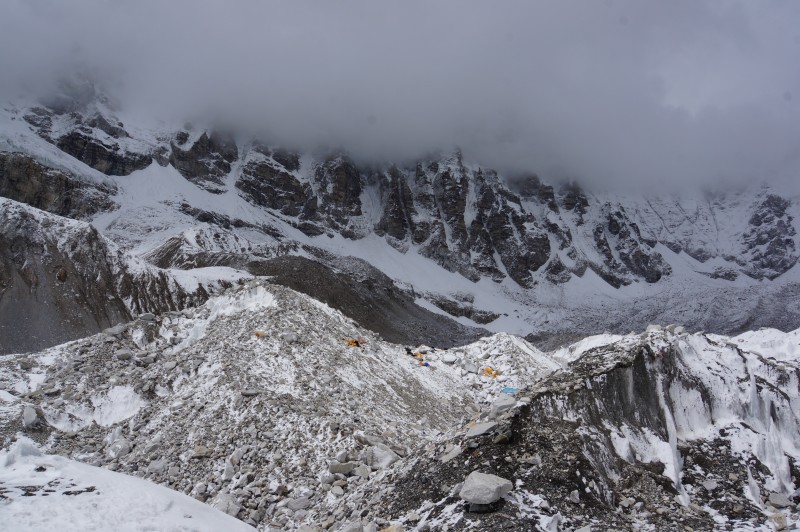 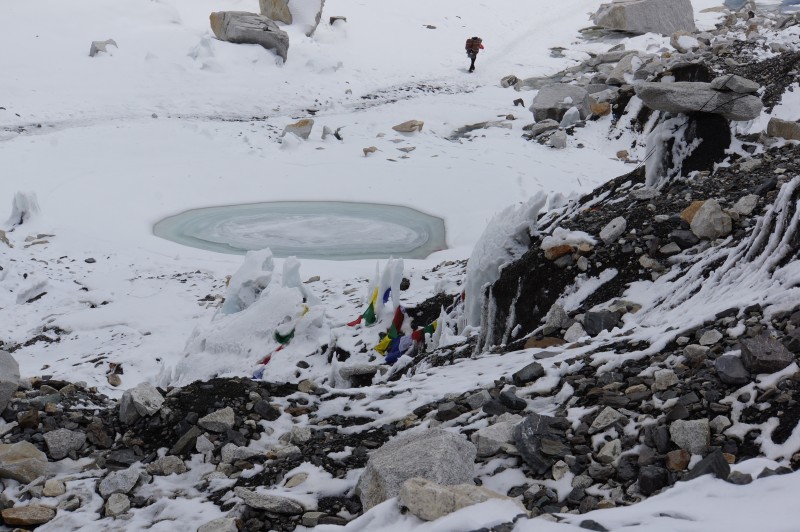 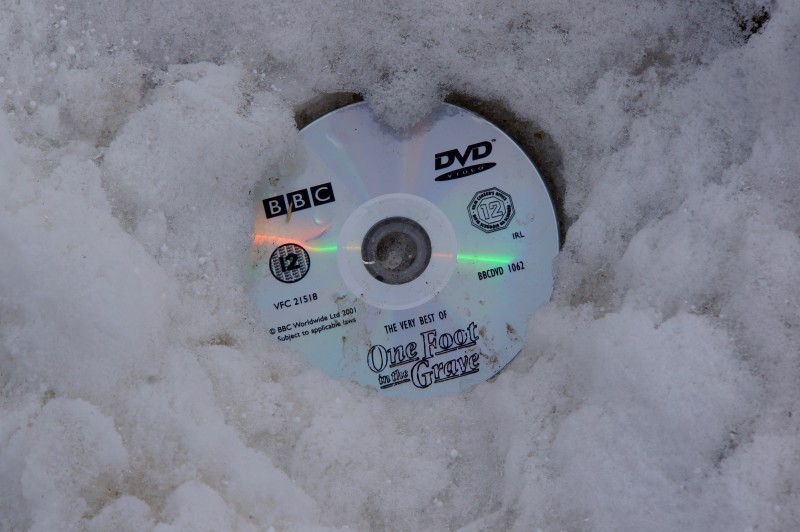 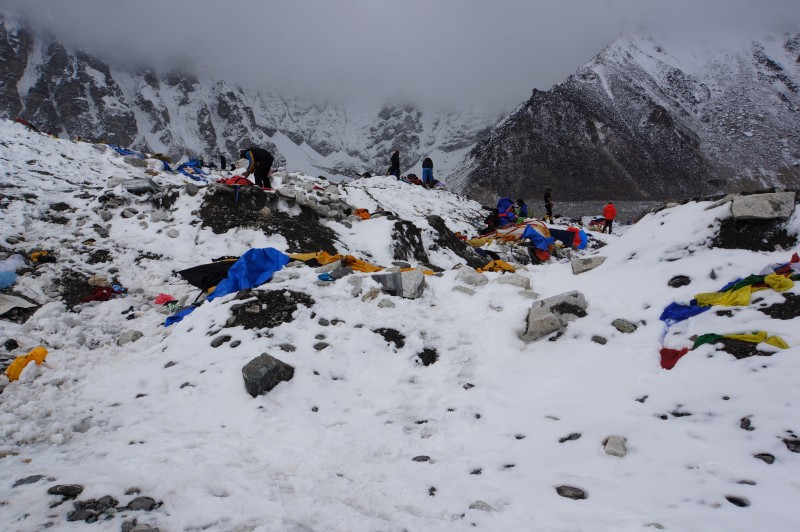 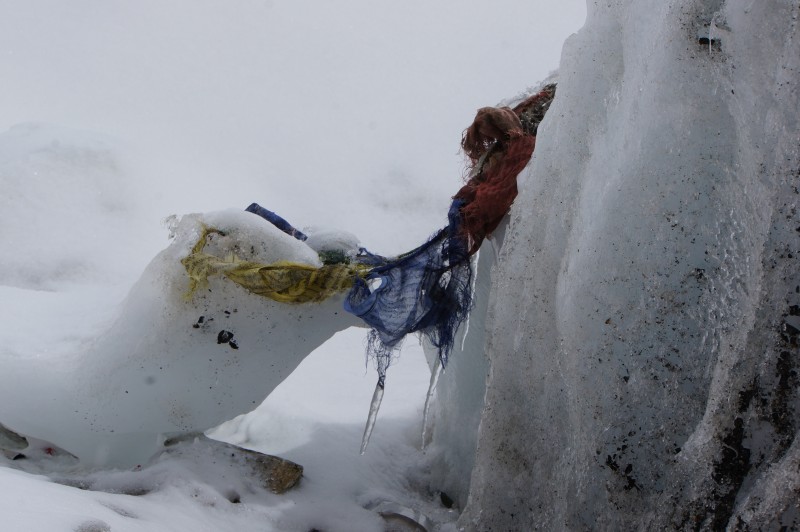 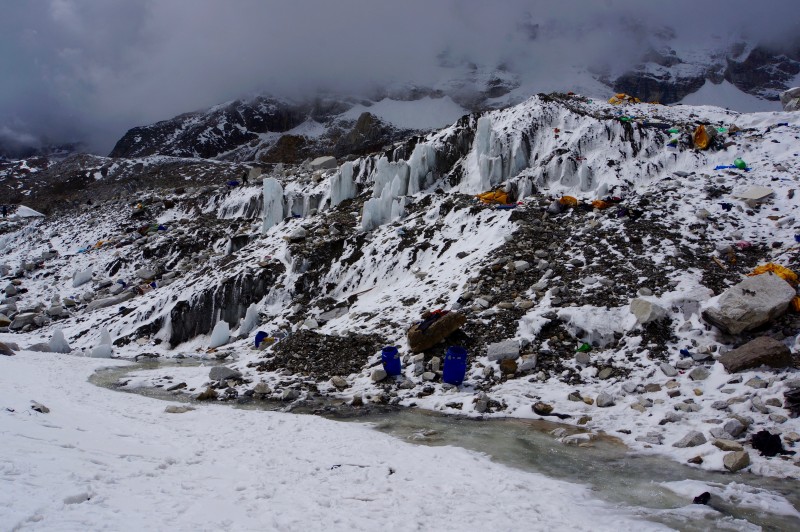 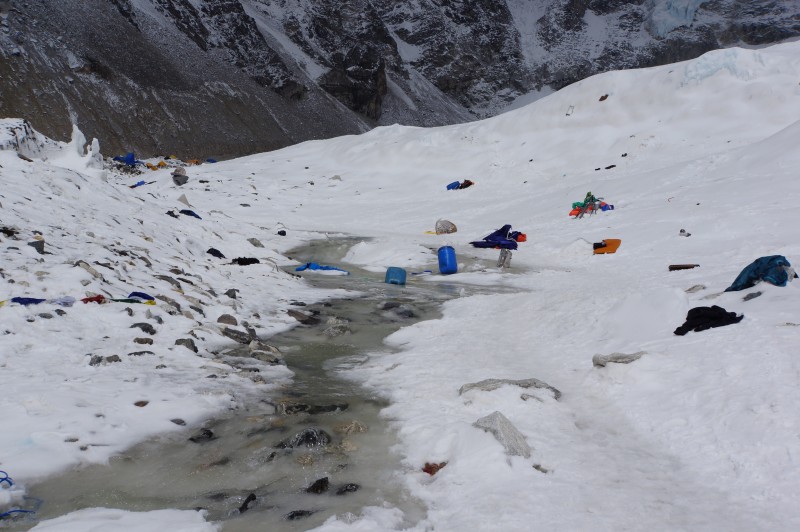 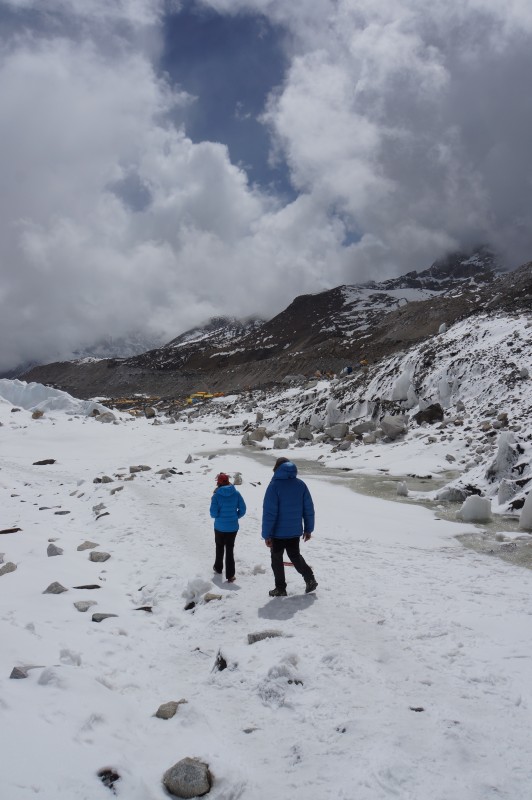 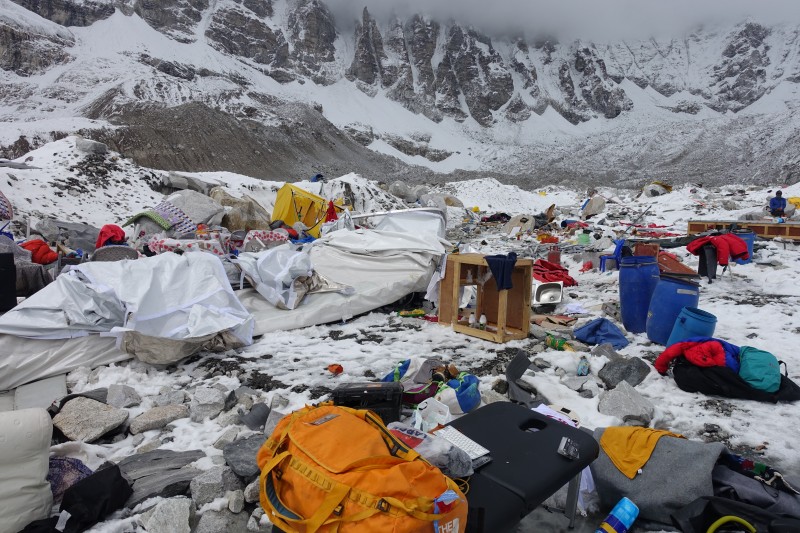 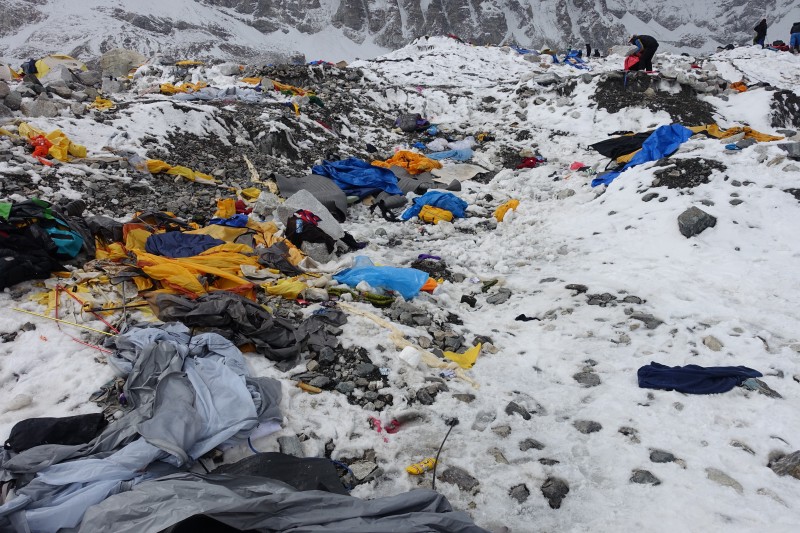 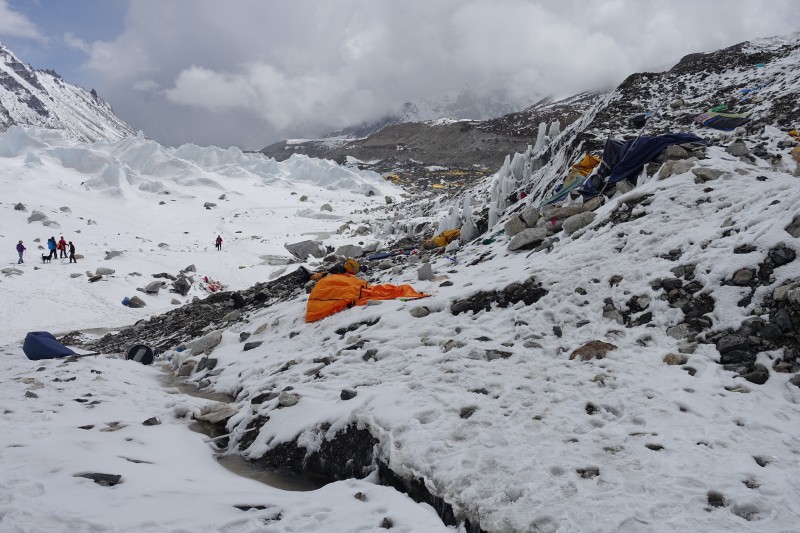 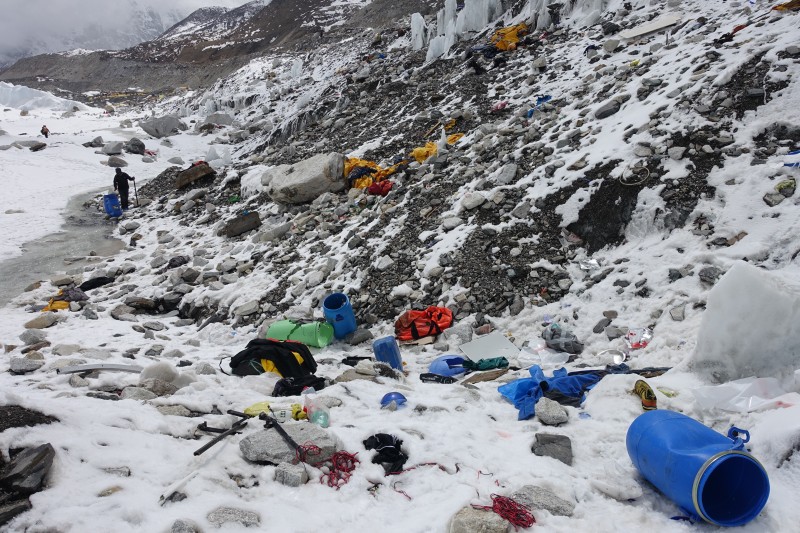 I was stunned on two occasions to look down and see the stones underfoot splashed with dried blood. It had been a true blast zone, a killing zone.

A few climbers and guides on other expeditions remained in this wreckage. They looked, for lack of a better term, shell-shocked. Some were combing through the mess looking for items of value, such a mobile phone. Others seemed simply… stunned.

A dog wandered along the moraine, sniffing about. We tried to get him to play fetch with snowballs, which did not work. Instead, he trotted back down the valley, and out of sight.

I wanted to see my friend Ellen, who was climbing with HimEx. We are good buddies from the 2014 Mt Vinson expedition, and even though our base camps were next to each other we had only visited once during the expedition so far, because our climbing schedules were out of sync. I walked a few minutes to HimEx Base Camp, which took me around the back side of our puja hill, where I was startled to find the morgue. Many of the fallen had been flown down already, but some remained, wrapped like mummies in their sleeping bags, arranged respectfully on the ice. It was a humbling experience. I was heartbroken for these people… real people, who had been laughing and talking and going about their business until they were instantly taken away. Sorrow mixed with creeping doubts… Why do we do this? Maybe everyone else is right—this is crazy.

I found Ellen in the dining tent. She was sitting at the end of the table next to a portable heater, quietly reading a book, perfectly composed and groomed, drinking a cup of tea. We hugged, I sat down, and we shared our stories. There was very little for me to say.

She calmly recounted the day of the quake. As a cardiologist, Ellen was one of a few physicians in EBC that day. Together they had worked tirelessly through the night trying to keep patients with head injury patients alive. She was clearly heartbroken. I told her how sorry I was that I had not been there to help, although it was clear to both of us that I would not have been able to make one bit of difference. We promised to keep in close touch, and I walked back to our camp.

Blake had managed to get online, using a different service from the broken one we had subscribed to earlier. There were few enough people left at EBC that bandwidth was actually functional, and it seemed worth the fee of $10 per hour. He urged me to get online and check my email and my blog. Initially I shrugged him off, thinking that no one would care or even know that I was up there. But, after dinner, once others had left the dining tent, I did sign on for an hour.

It was an overwhelming experience: So many friends, colleagues, well-wishers, and family members had reached out in concern. I have never seen the Facebook alert icon max out at 99+, but it did that day. I was able to text with Julie, which was wonderful and soothing and reassuring. I was shocked to learn that a friend had almost died a few days earlier while skiing in Europe, and was truly fighting for his life, his wife at his side in the ICU. Why do we do this to our families? To ourselves? I was trading texts with Julie when the connection suddenly went dead: 60 minutes had elapsed, and my time was up. The tent felt instantly cold, and I can scarcely recall feeling more alone in my life. At my core, deep in my bone marrow, thrumming in my chest, came an overwhelming, undeniable reverberation: GO HOME.

We were looking at a week’s walk out to Lukla, based on the state of chaos in Kathmandu. The airport was closed to civilian flights. The city’s buildings were unstable. We were, without exaggeration, among the most safe, secure, and fortunate people in Nepal. Shelter… Food… Water… even rudimentary communications… all were at our fingertips. There was certainly no rush to leave. And yet, that magnet tugged at me constantly, almost with a gravitational pull: GO HOME. The thought of walking out seemed so depressing and aggravating. I wanted, desperately, to fly home. But, it was not meant to be: First of all, no choppers were available, because they had important work to do. Besides, there was simply no safe place to go. IMG had kept me safe and sound this whole time, and I knew they would continue to do so. My mantra: Keep calm and trust Greg Vernovage and Ang Jangbu.