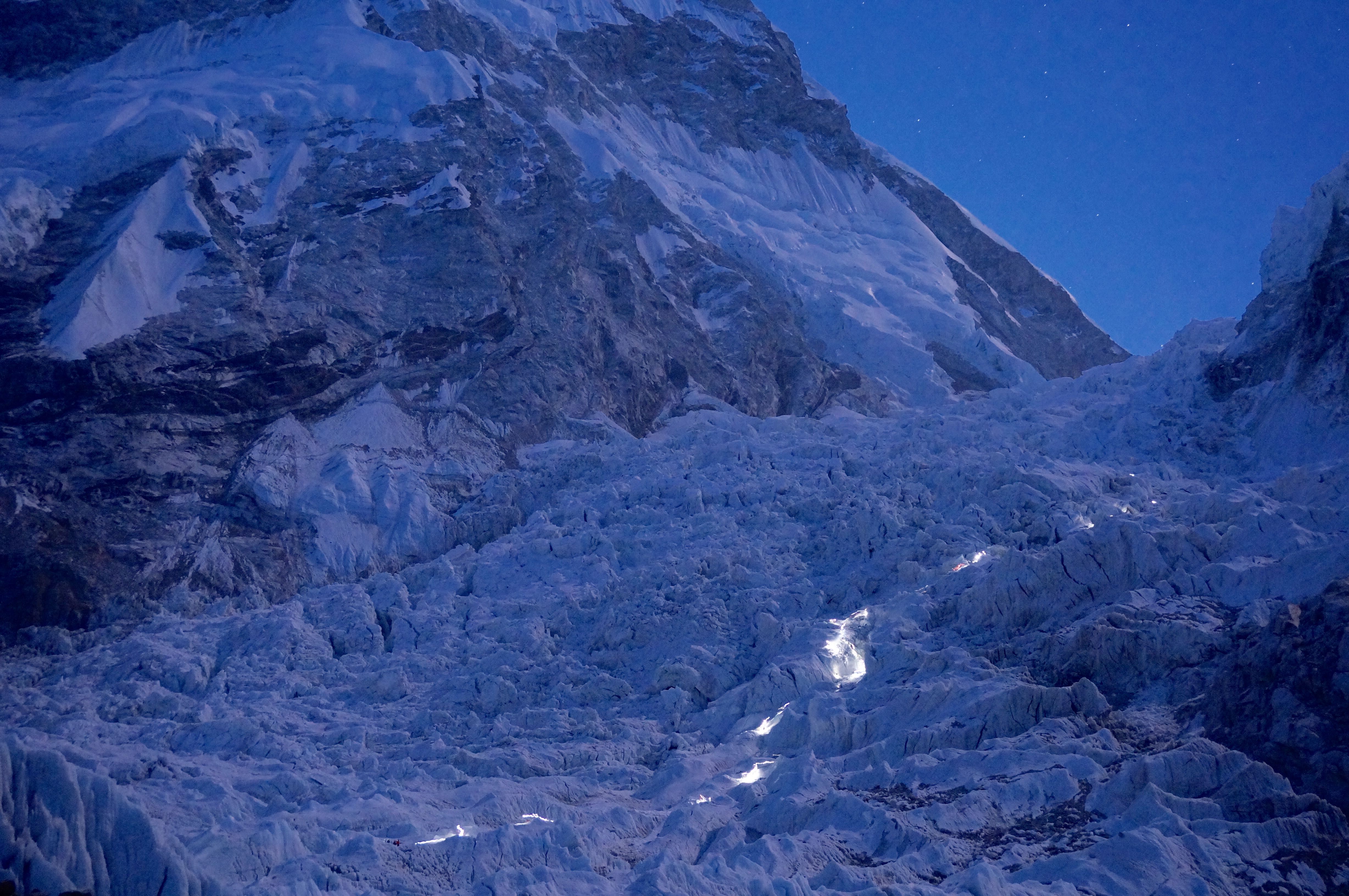 Our day began as planned.  Because my cough was triggered by deep breathing, I decided to walk extra-slowly today, in hopes of keeping my lungs under control.  Thus, I chose to leave an hour earlier than standard departure (2:30 AM instead of 3:30 AM).  This may not sound like a big difference, but we are always racing the sunshine up here.  In the Khumbu Icefall, sun is not necessarily a safety issue, like it can be on many snow-covered slopes that may avalanche in the heat of day.  The forces in the icefall here seem to transcend the temperature swings of day and night… the icefall is massive, and always on the move.  Rather, sunshine brings heat that makes moving miserable.  We always reach Camp 1 in daytime, but hope to be out of the icefall before the sun hits.  Last time we managed this perfectly… could I do it again with gimpy lungs?  Hopefully the extra hour would make this possible.

Leaving for a 5-day rotation involves quite a bit of preparation.  Not only does the gear load need to be perfect, but also the tent must be left in some semblance of order.  Returning to a festering, chaotic tent after some days away is just not acceptable.  Thus, I spent most of yesterday getting things in order, at a leisurely pace.

Our tents are two-person mountaineering tents made by Eureka.  As always, perfectly fine for one person’s base of operations on this expedition.  I have lined the tent floor with a small woven carpet, purchased at Namche Bazar, in order to help keep the cold of the moraine from creeping up into the living chamber—thanks for this idea Emily Johnston!  There’s room inside for my sleeping pads (I sleep on three of them) plus sleeping bags (I sleep in two of them) plus one of my duffel bags (the other is secured in the tiny rear vestibule).  In this configuration, I still have room for a “bare” carpeted area, perhaps 2 x 4 feet. This is my “living” area and staging zone for getting organized.  And, usually, it’s covered with random stuff that should be in the duffel.  Pack, boots, and climbing hardware live in the more capacious front vestibule.

When I am away, everything goes into the tent, and the doors are secured.  Except my laptop, which goes up the hill to the HQ tent.  Theft here seems almost inconceivable, for a variety of reasons—I have never seen or heard of anyone coming into IMG camp from outside—but this is a simple precaution to take.  So, housecleaning takes a bit of time, here as at home.

And, so does packing.  Because we already have considerable amounts of gear and supplies up the mountain, courtesy of our amazing Sherpa climbing partners, we can travel light.  Still, it is important to make sure that everything we need is there.  My load out for today:

Again, the only way we can get up there with such tiny loads is because of all the hard work of our Sherpa partners stockpiling supplies up high.

Anyhow, all this is packed and ready to go by the time we sit for a short breakfast.  Last minute fiddling and synchronizing of devices, and we’re off.

A minute from the dining tent we arrived at the puja stupa.  Juniper boughs were lit, and dried rice tossed onto the altar, and we asked Miolangsangma for permission to climb the mountain.  A very large avalanche released from Nuptse near the icefall at that moment.  In the icefall, in the distance, we could see headlamps swing rapidly from side to side as those on the route looked quickly for the coming blast… nothing was evident from our position, and we assumed that the route was clear.  No radio chatter to suggest the opposite.  We proceeded with the ascent.

And then something amazing happened: I felt great.  Going into today, I have felt pretty awful.  Not just tired, but wracked with coughing fits productive of a great variety of sputa.  One of my favorite games is to name the material that I expectorate in relation to varieties of sea life.  “I just coughed up a Kumamoto Oyster.  There goes a Penn Cove Mussel.  Oooooh, a red sea cucumber!”  Once I coughed so violently that I injured one of the muscles in my ribcage, leaving me vulnerable to really severe pain with subsequent coughing fits, or even rolling over in bed.  Several days ago I truly doubted whether I would have a legitimate shot at the next rotation, much less the summit.

Today, I felt great.  Just a few coughing spells, which were tiny and non-productive.  The chest pain was almost negligible, even though it had been crippling in my sleeping bag a few hours earlier.  My sinuses still fill with cold mucus right away, necessitating frequent positive pressure maneuvers (i.e. snot shots), but that is no big deal.  I simply could not believe how good I felt on the move—so much easier this time, so much power in my rubber-band-thin quads, almost never feeling as though I might run out of breath.  This is because of the guidance and support I have gotten from Justin and Emily, because of the miracles of modern medicine, because of the deliberate pace Justin set today… and also because of the weather.  The air was warm and still, with none of the withering cold wind that has hounded us daily here at EBC.  We heard the forecast yesterday, that the jet stream was going to leave Nepal entirely, which is very unusual.  It felt like a miracle to me… not even the typical katabatic winds that we expect every morning.  Just still, crisp air with a hint of forest fire smoke from down-valley.

We made it to the base of the fixed lines in about an hour.  And then came the news via radio: Part of the far wall in the Pit of Despair had collapsed, and the route needed to be reestablished.  No injuries, and there were climbers both above and below that spot.  Whether this was related to the avvy we heard at the altar is not clear to me at this time; it was clear right away to our leadership that it would be hours before the route was fixed.  No question: Time to spin and head for home.

I was not angry or even disappointed. It is what it is.  This morning had been a success: I had proven to myself that I could head up the mountain without doubling over in coughing fits.  I can give it a shot again.

Because IMG’s communications infrastructure is unsurpassed on the mountain, we heard about the collapse right away, before most everyone else on the way up.  We did our best to spread the word to other groups as we walked home, and eventually everyone above us turned back as well.  From near crampon point, Justin and Pasang Kami and I stopped to shoot some photos, which I think are amazing and show the lower route pretty well.

Dawn arrived, touching the top of Pumori and turning it peach colored.  The air remained warm.  Down the glacier, occasional pops and groans echoed, as the ice made its slow, majestic way down valley.  It was the first time I have taken a moment to appreciate—truly appreciate—the beauty here.  It’s just a mountain.  And it’s beautiful.  We can do this.

Home quickly, back to bed… and now I need to get the organizational aspects back in order.  Today was a gift—I suppose every day is one—and tonight we will get our game faces on.

55 thoughts on “Spinning on Ice”