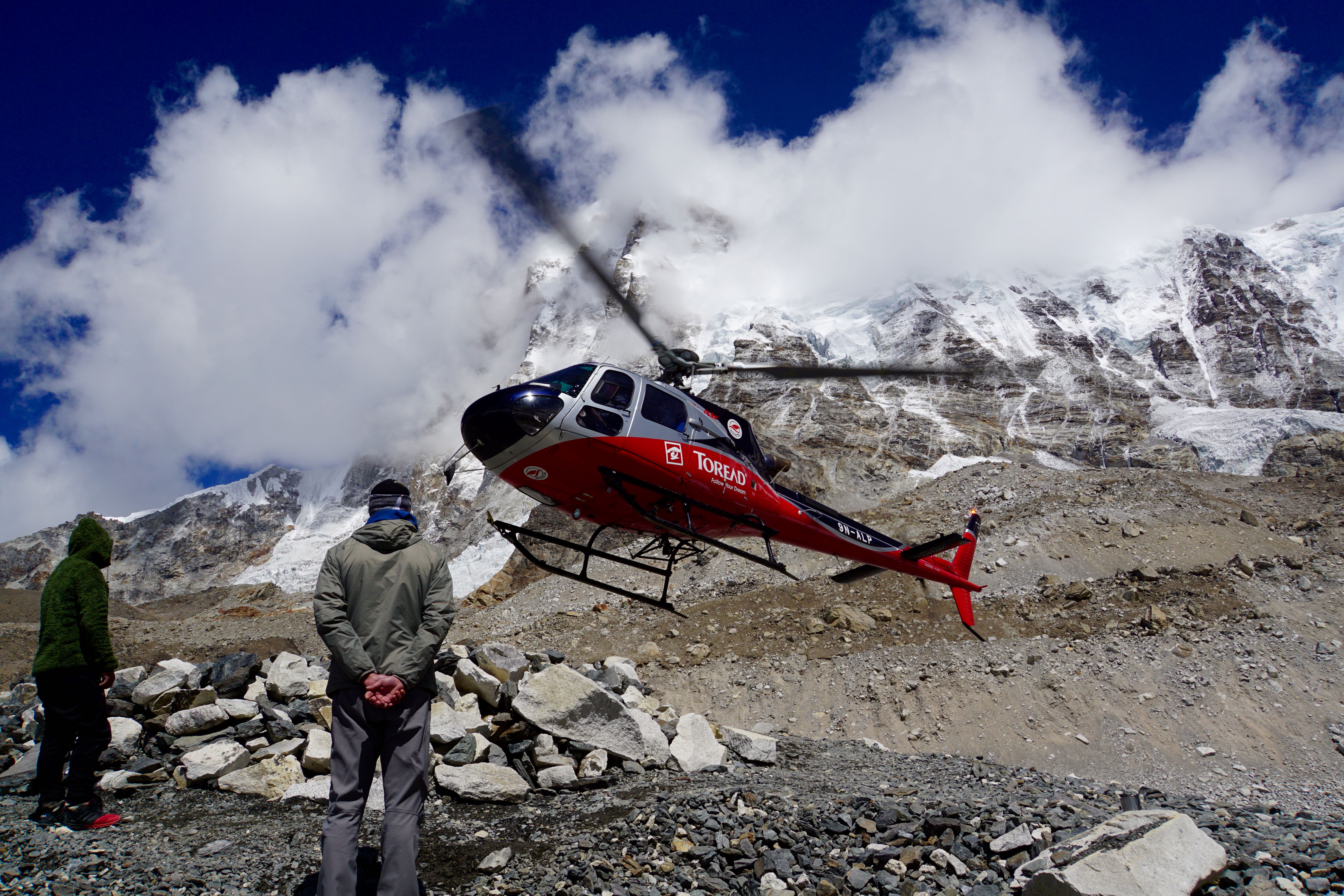 Well, here’s the thing: I was sick during the C3 rotation.  I did well on the way down, but had been very slow on the way up.  And, even back in EBC, my cough and sinus discharge continued.  It was clear that I needed to heal and improve if the summit was going to happen, and getting better at 17,300 feet is a genuine challenge.  The time-honored approach seemed to apply: Go Down, Young Man.

And so I did.  With some fabulous teammates who also had some respiratory issues to deal with, we all flew down to Namche Bazaar the next morning.  You can well imagine the state of affairs in my EBC tent: Reeking laundry strewn everywhere, gear in a riotous chaos, just begging to be dealt with.  But no, instead I packed my stuff anew and headed down valley.  In a way it was almost a relief to leave everything behind like that.  Almost….

We chose to fly rather than to walk.  This would save precious energy, and get us lower faster.

The flights were a total blast.  I was stunned to see how quickly the landscape rolled by beneath us.  Trail sections that took an entire day would pass by in under 5 minutes.  Clearly, this is the way to travel if time is limited.

Weather was a bit fickle, and so we stopped briefly in Dingboche on the way down, which was lovely.

Our time in Namche was just great.  It really felt as though we were on vacation.  That may sound odd (after all, isn’t this whole expedition a vacation?).  But, that is how it felt.  Sleeping on a mattress, with an electric blanket, sleeping in as late as I chose (10 AM), eating endless portions of good food and drinking nice coffee and plenty of beer.

And, as always, breathing in the rich air. The 11,200 foot atmosphere feels like  a rich stew.  My cough subsided to a great degree, and very rapidly.  Sinus discharge improved measurably.  My fingertips began to heal, and after a few days the iPhone was almost ready to recognize my fingerprints (not yet, but I could tell it was getting close).  I cleaned up my beard, cut my hair, clipped my nails, took long showers, and generally began to feel human again.  We took a relaxing stroll along the trail to Thame, which rolled through lovely forested terrain and revealed a variety of beautiful mountain flowers.  A super fun, relaxing time for sure. I would not have believed how well the healing process worked if I had not undergone it personally.

The challenge was timing: After about a week—perhaps less—the body’s acclimatization to higher elevations begins to wane.  I had just been at 24,600 feet, what was I doing about two miles lower?  When should we return to EBC?  First of all, it felt odd to have the team split into different groups, I did not like that at all.  Second of all, there is the inevitable FOMO: Fear of Missing Out.  We were in touch with EBC regularly, so we knew that we were not in fact missing ANYTHING.  But, the desire to get back onto the mountain was real.  We are here to climb Everest, after all.  May 10 seemed to be a fine time to return, and so we did.

A painful note: I took lots of photos in Namche, some really quite good!  Two stunning pieces of news: First, there was no card in the camera.  This happened because I was working on my blogs from the rotation, and needed to import the pics to my laptop.  Second, there is no real warning by the camera that it has no card!!  Truly.  Why not a big flashing warning “NO SD CARD!”  Nope.  It let me click away happily… until I realized a few minutes ago that none of my photos was captured.  Argh.  I like Sony, I really do… perhaps one day they will test their products in the real world.

More on our return to EBC in the next installment.

Concept for this portion of the trip: Trust your guides, trust your team… do not trust Sony.

16 thoughts on “Breathe It In”