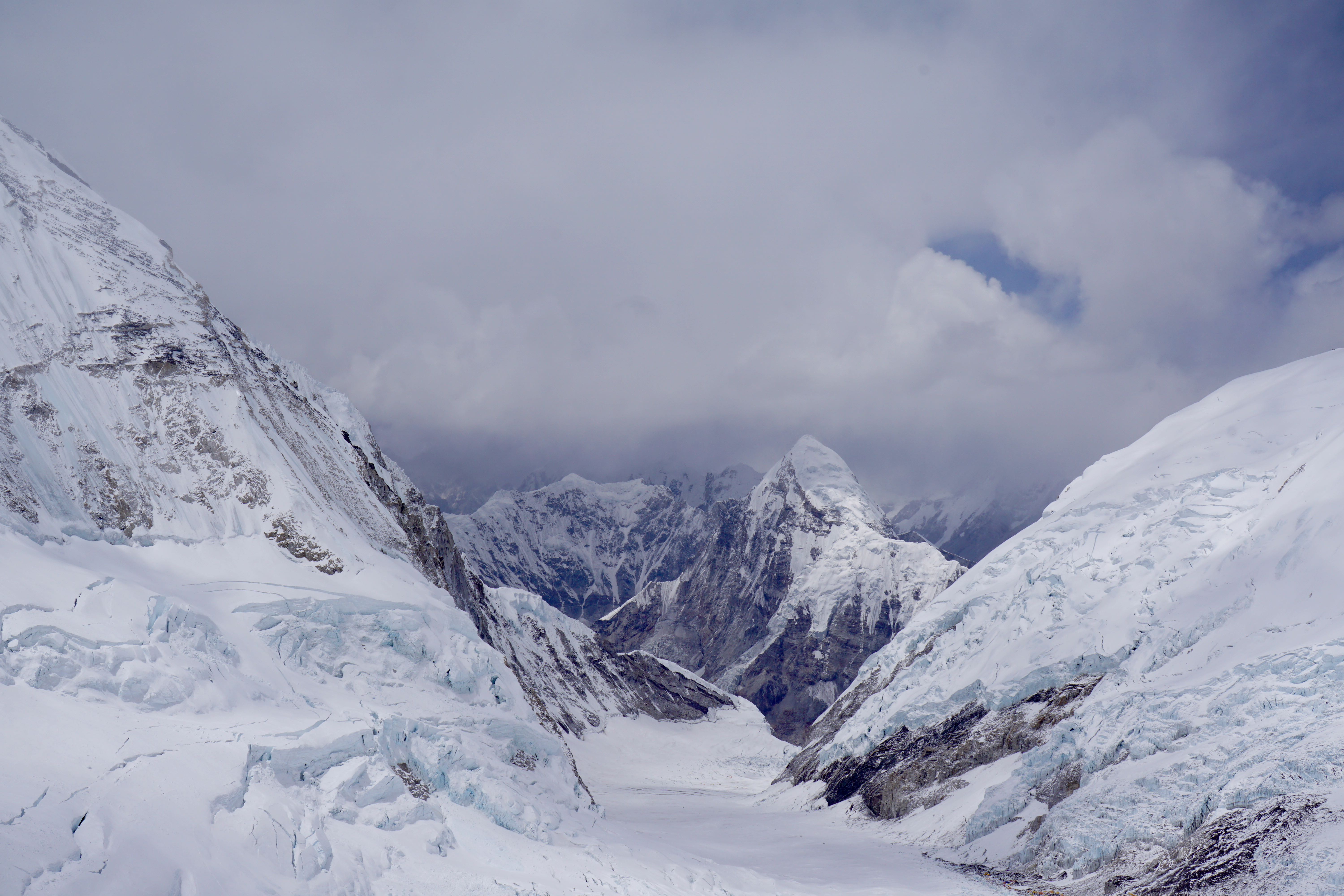 Circa 5 AM we started out towards the bergschrund in clear skies and cold, cold temperatures.  I began at the head of the pack, eager to make a good showing.  But, I knew better, because this would put me at risk of lung irritation.  Emily Johnston called me on it, as expected: “You need to slow down, doctor.”  And so I did, letting the faster team members pull away after we got the crampons on.  She was reassuring, as always: “This is not a speed trial.  This is about acclimatization, period.”

Our first break came at almost two hours, just below the ‘schrund.  I was surprised it took us that long to get to the base of the face, but there it is.  As usual, distances and scale are very deceiving up here.  The strategy is to drop down into the crevasse itself, then climb out on the other side after crossing a snow bridge.  We made this happen pretty smoothly; the overhanging wall served as a fine motivator for speed.

Above the schrund we emerged from shadow into the sunshine, and got down to the business of climbing the Lhotse Face.  Almost immediately the route doglegged right, away from the beautiful smooth left side, and up into a bulge of bulletproof blue ice.  This was tough going.  I paced myself at 8-10 breaths per step, but after a particularly tough move would surge to 20 breaths per step.  Bear in mind that on most any other slope, at most any other elevation, the breath : step ratio is about 1 : 1.  Up here, my goal ratio is three breaths per step.  So, this was very, very slow going for me.

The fixed lines here are true climbing rope, with a real kernmantle that the ascender teeth can dig into with authority, plus a nice dynamic action, and also a lovely hand.  In summary, these lines are far more fun to work with than the Korean twisted lines of lower on the mountain. There were plenty of times when I shoved the ascender up as high as I could reach, then leaned back and trusted it 100%, resting on the line while catching my breath.  These were fleeting moments, because any true rest would trigger an upwelling of sputum and reactive cough.

The face was not particularly steep; rather, it was so variable that it was just about impossible to develop a solid rhythm.  Rush, wait, start up again, slow down.  Exhausting work, and I suppose this was made worse by my lung issues.

In many cases, the thin dusting of snow from the prior couple of days made things substantially worse: the snow was just the depth of my crampon points, rendering them less reliable for biting into the blue ice beneath.  Knocking snow from the soles was yet another chore to attend to.

There were plenty of other teams on the lines that day, which is no surprise.  Some were headed to their version of Camp 3 to spend the night, others just wanted to reach camp and then head right back to sleep at Camp 2.  Managing traffic is part of mountaineering up here, and we are all trained to do it.  No miscommunications or close calls on the lines…. But, still, I saw plenty of technique that made me shudder.  I will not go into details etc, but I will say once again that I literally said out loud to myself on more than one occasion, “Thank god I am climbing with IMG.”

Camp 3 is really two totally different camps.  There’s the place where everyone else stays, just a short distance above the ‘schrund… and then there’s IMG, which is about 300 feet higher on the face.  The obstacles between the camps are small—or would seem small on any other face.  But, above 23,000 feet, every step is tough.  Eventually we made it within sight of the HimEx camp, but I had no idea how much farther our camp was beyond that.  In total exhaustion, I sat down in the snow and took a drink of lukewarm water.  Then I noticed a unique figure standing next to the HimEx tents: Justin Merle!  Turns out our camps are superimposed on each other, ours is just invisible from below due to the steepness of the slope.  Pasang Kami’s brother, Mingma, came down from camp and took my pack from me, which was a huge blessing, and we made our way up the last 50 meters to Camp 3.  I was totally gobsmacked by our elevation: This was much, much higher than I had envisioned.  The Yellow Band snaked along below us.  The nose of the Geneva Spur lay below us.  Getting to the South Col looked more like a traverse left than a climb (this is an illusion, but a good one).  Oh my god we are climbing Everest now.

Camp 3 sits on a narrow platform that has been chiseled from the snow and ice.  The tents are clustered together in a line, and a narrow catwalk runs in front of them.  Justin guided me along this catwalk to the last tent.  Inside: An insulating pad and an oxygen cylinder (just in case I got into trouble with HAPE in the night).  Off came the crampons, and in I went.  After a short time I was unpacked and settled.  Toughest part was inflating my Therm-a-Rest pad (three breaths for me, one for the pad).  I got into my -40 degree sleeping bag and tried to drink as much water as possible… I was able to down a liter within an hour, which is pretty good for those conditions.  My MRE was heated quickly and handed back to me: Beef stew with noodles & vegetables.  I’ve eaten lots of instant meals up high, but this one took the cake for being unpalatable and unpleasant.  Over the course of 20 minutes, I ate every scrap of it.  Eat or perish.  Do it.  I also forced down some sweet snack food, and more hot water.

My tent mate was my trusty climbing partner, Pasang Kami.  He climbed into the tent after me and was unpacked and ready to sleep in a flash.  His kit is very spartan compared with mine.  I had a hard time making out whether he was under-equipped or whether I was over-burdened.  Mostly the latter, I think.

The goal of this night is to have the toughest night of your life, breathing ambient air at 23,700 feet, in order to trigger a beneficial acclimatization reaction.  It is a time-honored tradition at IMG, and although few other outfits still go this way, I thought of it as a point of honor and pride.  The messages of support poured in via my InReach, and I cannot tell you how they boosted my spirits.  Let’s do this.  My goal was not to sleep, but rather to merely survive the night.

But, sleep I did.  I was just too knackered to stay awake.  In my deluded, hypoxic state of mind, I experienced a variety of hallucinations and fixed beliefs.  Some of these may have been referable to the wonderful book I am reading, One Summer:  America 1927 by Bill Bryson.  But who knows.  A more memorable thought process: For every time I executed a proper breath (in via the nostrils, out via the mouth, all under cover of the buff and in a humidity-cave built from my sleeping bag), a family overseas would receive a small amount of money.  In fact, the left nostril and right nostril went to different families; I forget about the left, but the right one went to support a middle class family of four in Australia, in the 1950’s.  They sat there on their burnt-sienna shag carpet, dad smoking a pipe, watching me breathe time and again.  If I stopped breathing temporarily (this happens all the time at altitude, even with acetazolamide on board), they became a bit cross.  You can do it, mate.  Go on.  BREATHE.

By far the most uncomfortable—shockingly uncomfortable—sensation was the dryness of my mouth and throat.  We’ve all had the experience of waking up in winter with a dry mouth or sore throat.  Now, multiply that sensation by 20.  I literally peeled my uvula from my palate with my tongue, and it took a bit of force and maneuvering, popping off with a sickly sound reminiscent of carving chicken on a cutting board.  Drinking water, or gargling or swishing, provided virtually no relief.  Cough drops made things worse, coating the mouth with an odd, slick residue.

Breath after breath, minute after minute, hour after hour it went.  I tried to read for a time, which was a welcome distraction (Warren G. Harding was an absolute monster, corrupt to the core… I had forgotten all about this).  But, time ticked by slowly indeed.

By the time light began to penetrate the tent walls, I was very happy.  I had no real breathing trouble, I had slept from time to time, and aside from the world’s driest mouth I felt pretty damn good.  You did it.

Word of the day: Uvula.

26 thoughts on “Face the Face”