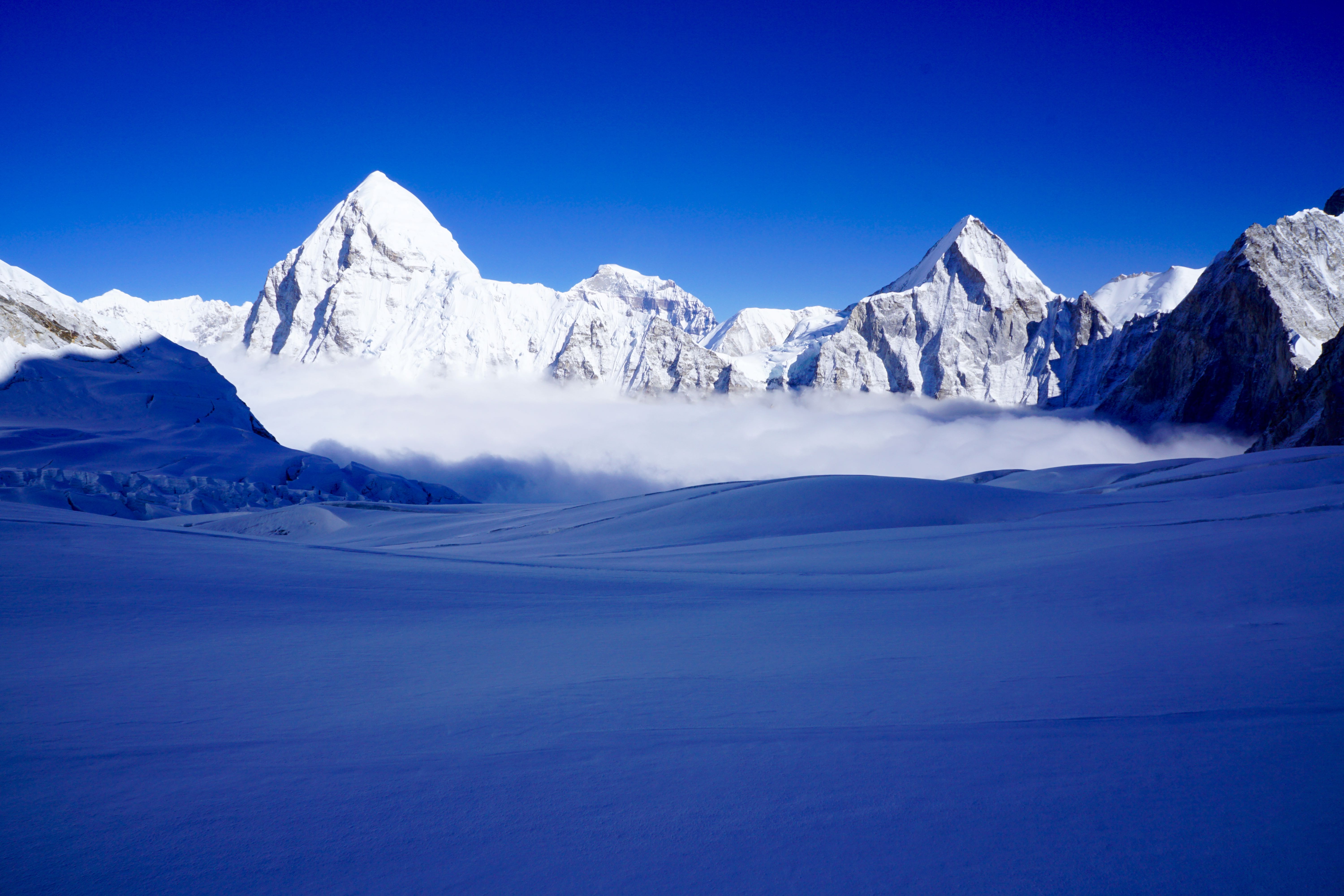 I slept poorly, eager for the move back to EBC.  I had a feeling that if I could just get through the next few hours, everything would be OK.  EBC: Hot meals, hot showers, my own warm tent, internet, phone… all the luxuries I could want.  Just get down this, smoothly and safely, and then you can collapse.

As usual, the frenetic start at Camp 2: final touches to the pack load, rice bags destined for different locations, a tent to clean out and make tidy.  All in the pre-dawn darkness and intense cold.  However, we were blessed with near perfect conditions: clear sky, calm winds, no precip.  This will be easy.

I carried my crampons by hand until we reached the bottom of camp, our little crampon point before we spilled out onto the broad Cwm proper.  The metal frames were intensely cold, and the chemical warmers I had used in my Point’NChutes were totally ineffective—no surprise after they had been rotting on the mountain for a year, but still a disappointment.  I grabbed the ‘pons by the plastic-coated toe bails (I wear Petzl Vasaks with lever locks), but it felt crazy cold, even with my smart wool liner gloves underneath… although these were ravaged by the rotation, full of holes and tears.  Dammit I should have put the crampons on my pack.

Soon enough we got the points on and got moving.  And, as always, my hands began to warm up.  We made great time on the Cwm, and before I knew it we had reached Nuptse Corner, filled with small horizontal ladders and switchbacks.  Dropping over the roller faces was a bit painful because of traffic: we were not the only ones with this plan in mind, and so there was some waiting on top of the rollers, but nothing too bad.  Besides, the views were spectacular.

We dropped some gear at Camp 1, in anticipation of the next rotation, then moved out towards the icefall.  Today had been predicted to bring heavy snowfall, but the morning was crystalline…. When we moved below Camp 1, the truth became clear: The upper mountain would be perfect today, but the icefall and below were totally socked in with dense fog.  This was a first for me, seeing such a well-defined layer below us.  Over the radio we learned that EBC was intensely cold and miserable.  Perfect.

Down we went, into the maneating fog.  Visibility dropped to about 30 meters, and the world was silent, still, and creepy.  And beautiful.  At least we won’t roast in here.

In the fog, everything looked a bit different, and this made the journey more interesting.  I kept my pace up, strong as ever, and made sure my technique was solid.  Not sure whether it was the promise of salvation at EBC, or whether I was just having a good day, but things felt good.  I will not pull into crampon point feeling like a wet noodle, the way I did last time.  Today I am long and strong.

We had some traffic in the icefall, which always presents a challenge to my patience and good nature, but there you go—it is what it is.  Overall, the mountain felt almost like our private paradise, and Pasang Kami, Justin, and I made fine time down.

Back at EBC, life could start to normalize again.  Off came the filthy clothing, sleeves clotted with bloody snot, layers stinking of days of effort.  The hot shower was almost like a rebirth, the food and drink pouring energy back into my system.  I still coughed plenty when I breathed in the withering wind, and certainly when I laughed (which we do all the time here).  But, I had a sense that things were on the mend.

Today was also auspicious because it’s my brother’s birthday; wish I could celebrate with him in person.  When I get home, we will have a three-way party (me, my redneck twin Katie, and Matt).

Phrase of the day (Kim to a climber from another team, flummoxed in the icefall): It’s not meant to be a puzzle.