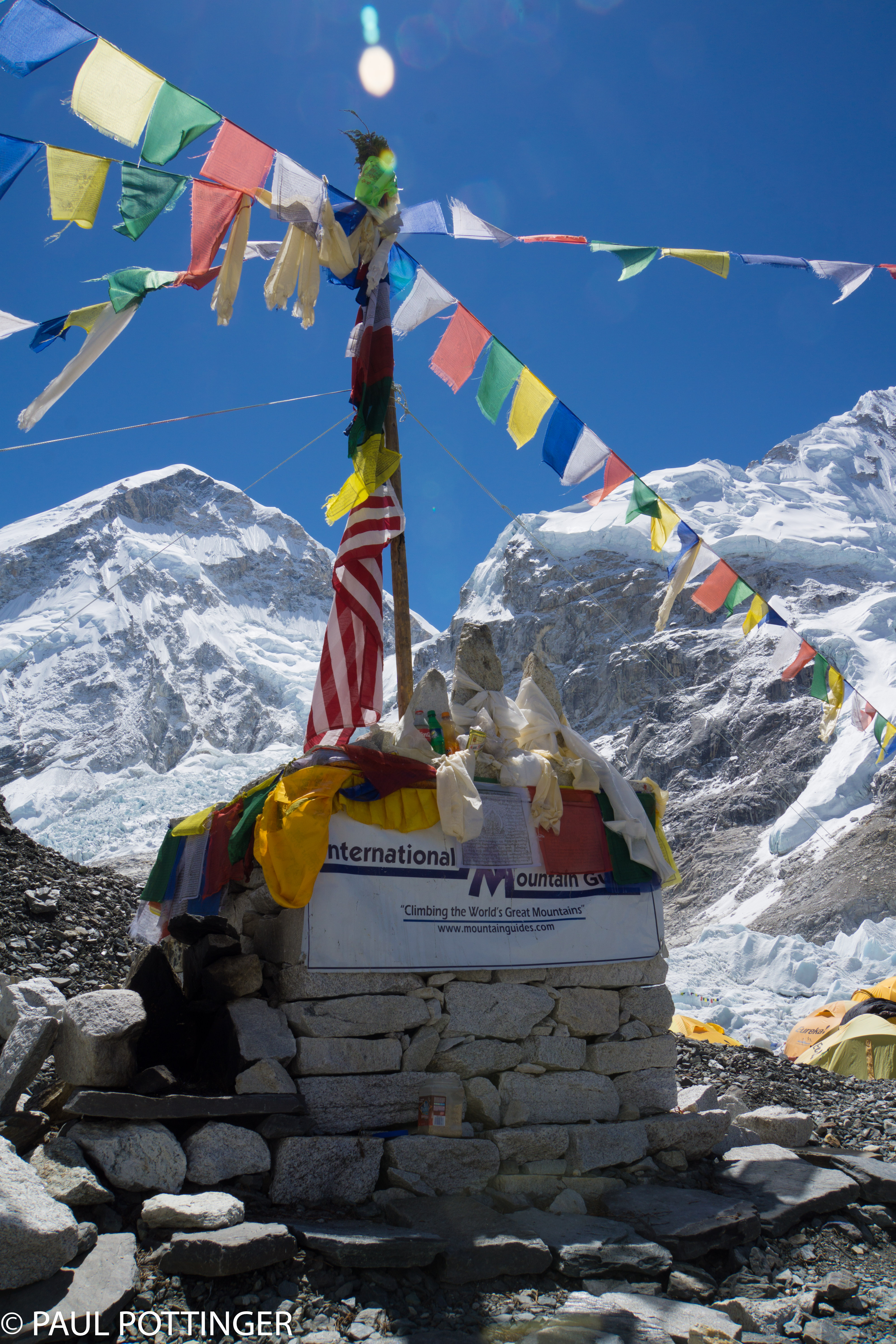 We watched the weather daily, actually twice daily, looking for any favorable changes in the predicted wind and precip patterns up high.  Initially we hoped for summit conditions on May 21, but the wind speeds remained high on two different models, and there seemed little hope of shooting for the summit before May 23.  Justin reminded us at breakfast that things can change in a heartbeat, and that we should “plan” to leave for the summit early the next morning… but, our assumption was that we had several more rest days in store.

I wanted to stretch my legs, and decided to walk around EBC and snap some photos.

When I reached the top of EBC I decided to go “treasure hunting,” meaning searching for interesting or unusual artifacts.  I went two waves past the current entry point to the glacier (our “crampon point”) and turned in to a flat tongue of ice.  No footprints on the snow… this area appeared not to have been touched since last year, when it served as crampon point for the 2015 season.  At a glance it was pristine and natural… on closer inspection, the ice was riddled with millions of bits of “micro trash,” tiny shards of rigid and fabric plastic that were welded into the ice by the freeze-thaw cycle.  Most of the “big” wreckage from last year was gone, picked clean by human hands—I am told that the Indian Army stood up in a big way to assist with this effort.  But the micro trash can never be cleaned up properly… it will have to make its way down the glacier, at glacial speed, and ultimately be dumped into the moraine which is home to Dukla, Pheriche, and is the watershed for the entire Khumbu valley.  I suspect it will take a century for this to happen, although I could be mistaken.

All around me, on the walk through EBC and in the glacier itself, were signs of spring: The ice was melting.  A beautiful river always runs along the lateral moraine, and it had grown in force and width even in the last few days.  Parts of it look exactly like a water slide, complete with person-sized chutes and exciting twists and turns.  We joked about running these rapids in celebration after our summit was achieved (just joked), but now the force and volume of the water made that idea into a farce: the Khumbu was turning into liquid, fast and furious.  This may be a normal part of the annual cycle, but it seemed like a major and unexpected change to me this early in the season.

The weather was nice that day, perfectly sunny and calm, as we often get before noontime.  I had lots of freedom to watch the icefall carefully, to look for teams descending from their summit rotations.  My friend Mary had stood on top with a different expedition two days before, and I reckoned that she was due to come home that morning; I wanted to snap her photo, as a small gift.  Little did I know that in fact she and team mates had been pinned down at the South Col in a ferocious wind storm, and would not be down for another 24 hours.  There was little activity on the icefall, and eventually I gave up and headed home.

No news of weather changes at lunch… clearly, we would not climb tonight.

And yet… after lunch, there was considerable activity in the HQ tent, and everyone was eager to know what was happening.  Just before dinner, we got the news: The weather models had changed substantially, and we had a good-looking window on May 21.  To catch it, we needed to leave that night.
We knew this might happen, so most of the packing and organizing was already accomplished.  Still, I wanted to be sure that everything was right—there would be no second chances—and this meant fussing and fidgeting with the kit until about 9 PM.  I was able to call my family, which was lovely, although the connection was weak.

I slept poorly that night, waiting for the 1 AM alarm.  I forced myself to stay calm, to try to relax.  I knew that I’d done fine on the route so far—parts of it multiple times—including Camp 3 (where my slow ascent seemed to have been caused by illness).  You’ve got this.  The other part of my mind was too excited to let me rest.  This is it.  The summit!

Iconic thought of the day: No pressure.