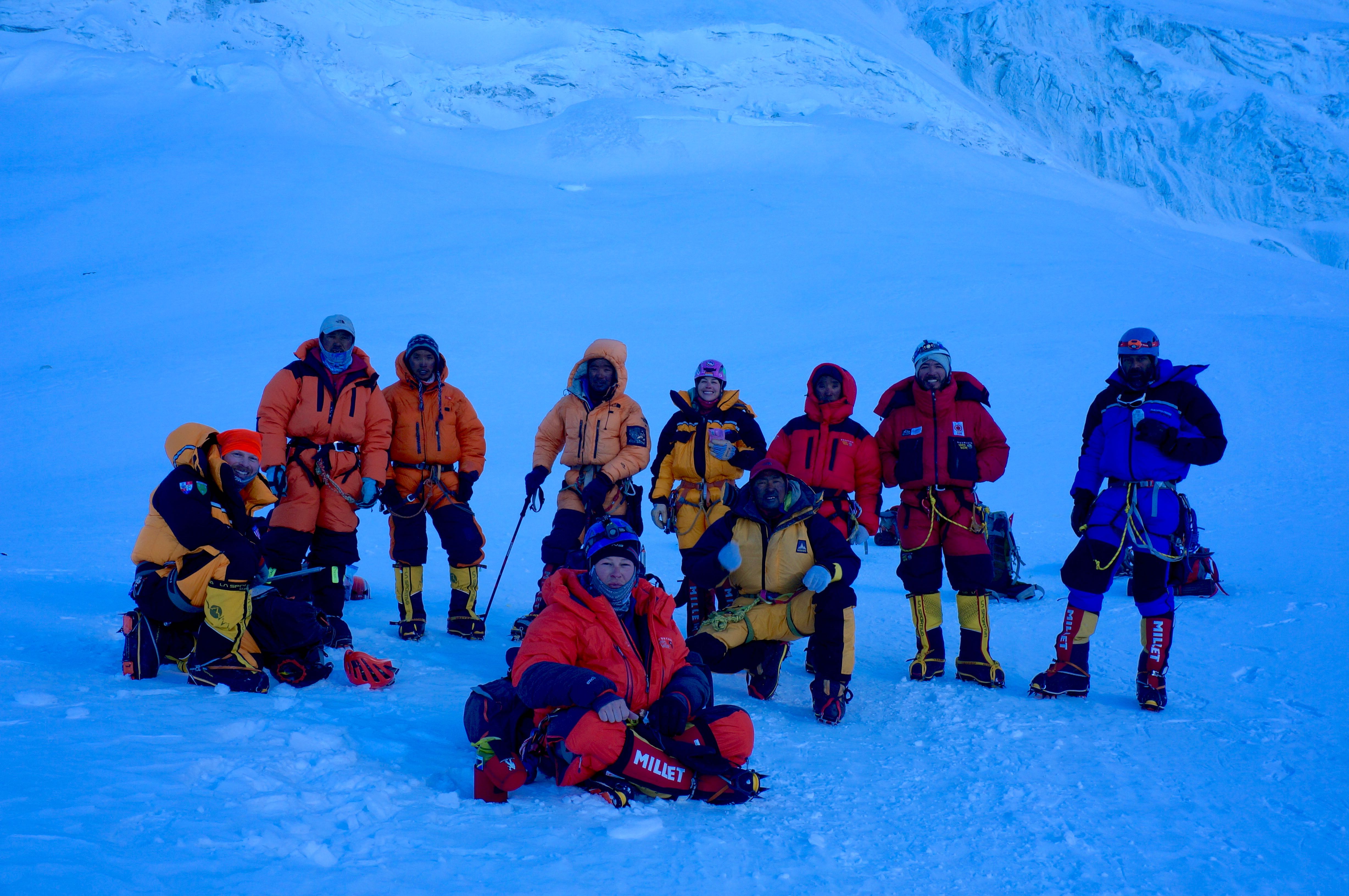 Again, the weather behaved as predicted, and we had clear skies and just a bit of wind when we left Camp 2 at dawn.  I counted very few figures on the route above us.  My lungs felt fine.  Not much sleep to speak of, but I still felt fine.  Hot damn, we are going to nail this.

And so we did.  Bottom line was a door-to-door time of 5:20, just about half of the 10:45 from last time.  I actually felt like a mountaineer this time, rather than a fish flopping out of water, gasping for each breath.  Knowing the route always helps alleviate anxiety, because I can anticipate where the breaks will (and will not) happen.  And conditions were more favorable this time, with a robust snow cap atop the bulletproof blue ice underneath, fine steps kicked by hundreds of feet before us, and no wind blasts or ground blizzards.  But, most of all, the difference seemed to be my lungs, which felt and performed well, with only an occasional dry cough during rest stops.  In fact, it was a beautiful day, and there were ample opportunities to enjoy the amazing view.

However, I clearly need to work on my situational awareness, because while watching my footing I missed noticing a bottle of oxygen hurtling down the face, close to our route.  I learned that this had happened when urgent messages came over the radio, asking for assistance below: one of our Sherpa climbers had been hit by the bottle.  The situation was clearly serious, and for long moments we stood on the route, virtually holding our breath, waiting for news from Josh McDowell and Emily Johnston, who were on the scene in a flash and rendered expert aid.  IMG Sherpas are our team mates, our colleagues, our friends.  Please, please be OK.

Thank goodness he was indeed going to be OK.  The bottle hit him in the foot, and although there was concern for a fracture, this could have been far worse.  His expedition was over, and it took assistance to get him to safety, but the bottom line here was that he had dodged a bullet, so to speak.  Keep your eyes open.

I pulled into camp feeling good, and settled in.  Initially I was assigned to the tent that had been salvaged with a spare fly by the prior team during the windstorm.  It was misshapen, and somehow sunken down into the snow at an odd angle, so that getting in and out involved dropping down about a foot… it felt like a snow tunnel I had dug in the front yard as a kid, and looked a bit manky.  I liked it.  “This tent looks like a hobbit’s hole.  Cool.”  I was glad to start moving in.  But, Pasang Kami was very displeased that I was assigned here, and ultimately it was decided that I should take a tent in more pristine condition one level above.  No worries.

My tent mate had not yet arrived, so once I had given myself some time to breathe in some supplemental oxygen (0.5 liters per minute), I decided to check in with my wife via satellite text.

My InReach text thread with Julie:

Julie: Also do you want me to post anything to the blog?

Me: You can copy my FB post.  That would be super.  Love you.

Me: Hardly touching the stuff.  Drunk on hypoxia more like it. I cannot tell you how relieved I am.  Did not realize how terribly ill I was last time.

Julie: Not the part about the stallion goat?

Me: I was dreading this section of the climb, it was torture last time.  I thought it was me.  Turns out I was sick as hell and in denial.  Sound familiar?  And… I stand by my stallion goat.

Julie: Is everyone else doing better?

Me: All better, one member still a bit ill but lots better.  He just beat his prior time by 3 hours.  We are all on target.

Julie: When else were you sick as hell and in denial?

Me: Me (sic) not a good patient with cold and flu, true?  Holy Moses, one of the Sherpa is smoking.  #oxygenitsagoodthing.

As I entered this message I heard a ruckus right outside the tent.  Several team members began to shout at the same time.  “Arrest!  Arrest!  Stop!  Nooooo!”  Then, sounds of shock and horror.  I dropped the iPhone and stuck my head out the tent door.  The face was as calm and serene as ever, but a tragedy had just happened: A climber had slid past camp at high speed on his back. He had not seemed to respond to our calls, or to attempt to stop himself.  In all probability, he was unconscious at best, if not dead already.  He had disappeared out of sight down the face.

“I hope he makes it,” said a teammate. “Maybe they can get to him near the bergschrund.”

I looked at her for a moment, while the gravity and reality of the situation sank in for both of us.  Then I said, “I’m afraid he is gone.  I cannot imagine anyone surviving a fall down the whole face.  I doubt that has ever happened.”

We listened carefully to the radio for news.  Within an hour, some details emerged.  This was a Sherpa climber, working for a different outfit to fix the route on Lhotse.  He had fallen—somehow—from the route above Lhotse high camp, and slid all the way over and past the bergschrund.  His body had been recovered and flown off the mountain.

Each of us was numb, and shocked, and grieved in our own private way.  How could this happen?  Why wasn’t he clipped in?  I thought of his family, who had almost certainly just lost both their loved one and also their main breadwinner.  What sort of benefits would come their way?  What would become of his children, if he had them?  Inevitably I thought of my own wife and kids.

Julie… as soon as the accident happened, I had one thought: I have to tell Julie.

Me: Darling, a totally different topic….

Julie (in response to my comment about me being a terrible patient): True, although you’ve improved since your Denver Health days.  (I was notorious for never missing a day’s work, even when so sick with diarrhea that I needed to round with an IV in place—thank goodness this kind of idiocy is no longer tolerated.)

Me: A totally different topic: While I have been texting with you from my tent a climber was killed falling down the Lhotse Face.  Stranger to us, not IMG.  This is why we always always always clip twice.  There are so many unqualified people here.  It is sobering.

Me: Yes dear.  We saw him slide past.  Nothing we could do.  This type of tragedy is impossible with standard technique.

Julie: Can I mention this in the blog, v briefly?  So people won’t worry when they hear the news?  OMG you saw it??????  I am messaging Blake (my buddy and teammate from last year’s expedition).

Me (about 30 minutes later): It was a Sherpa fixing Lhotse.  No protection.  No excuse.  I did not watch, was in tent texting you.  No need to blog or FB, the story will break with this info.  (We have a strict rule that bad news is not to be blogged etc, to protect the next-of-kin from hearing the news in this way.)

Julie: But I don’t want people worrying when they hear the news.  I notified your family.

Soon thereafter, our teammates arrived in camp.  Some were stoic.  Others burst into tears.  They had been very close to the fallen climber when he slid past, and it had clearly been a horrifying experience.

I did not push, but my tent mate was eventually eager to talk about the experience.  He had initially thought he saw a sleeping bag heading down the face, spinning over and over on the ice… until he saw a head, and realized this was a person.  As with us, there were no responses to his calls, and no intentional movement was seen.  Knowing now that this person had fallen from high on Lhotse, we agreed that he had probably already passed away from injuries sustained when sailing over the Yellow Band, if not higher.  We tried to take comfort knowing that he had not suffered during the fall, but it was cold comfort.

Life at Camp 3 continued, and we were busy getting ready for the rigors of the following day.  But, I quietly focused on this loss.  At the start of this rotation I had believed—truly believed, down to my bone marrow—that this year would be accident-free.  It sounds daft, but I felt that Nepal, and Everest, and the Sherpa people deserved year without death.  So much loss, tragedy, and senseless punishment in recent years… Now is the time for a simple, beautiful, serene, boring season.  Enough death.  This year will be different.  I had focused on this during our blessing ceremony with Lama Geshi.  I had envisioned this during the Puja ceremony.  We had worked hard to take care of ourselves, to ensure that we put no one in harm’s way.  And still… this man was gone, forever.  Please, please let this be the only loss this season.

A nice surprise came our way that afternoon: Our bottles for the following day were prepared for us, with regulators in place and ready to go.  This was a treat: We are trained to prep the bottles for ourselves, but they sometimes develop small leaks that can be tough to detect, and to prevent this (oddly) one must pour hot water onto the chrome fitting that extends from the bottle proper.  This takes a bit of time and energy (just a bit), so it was nice that our Sherpas and guides had taken care of this for us in advance… we would share a bottle at low flow overnight, then switch to high flow on the new bottles as we left camp in the morning.

Sleeping on a liter per minute of supplemental oxygen was like a dream compared with the last time I had been there.  No more hallucinations, no cough, no searing dry throat or uvula acrobatics… the mask fixed these issues.  Once it was adjusted for tightness and position, I was able to get a few hours of sleep, before the 5 AM wakeup.

In the darkness, my thoughts turned to the lost climber.  Time and again I wrestled them back to home, where I watched our children playing and laughing in the back yard on a warm summer day.  Everything I wanted was there: my wife and kids… all the food and drink you could imagine (especially sushi and platters of Greek food)… restful times in the lounge chairs… and sweet oxygen by the lungful.  The next 48 hours will be the hardest of your life, but then you will be done.  You can go home.  Focus.  It will hurt, but pain is nothing.  You will never suffer up there.  You will keep your promise: You will go home.

28 thoughts on “Heartbreak at Camp 3”