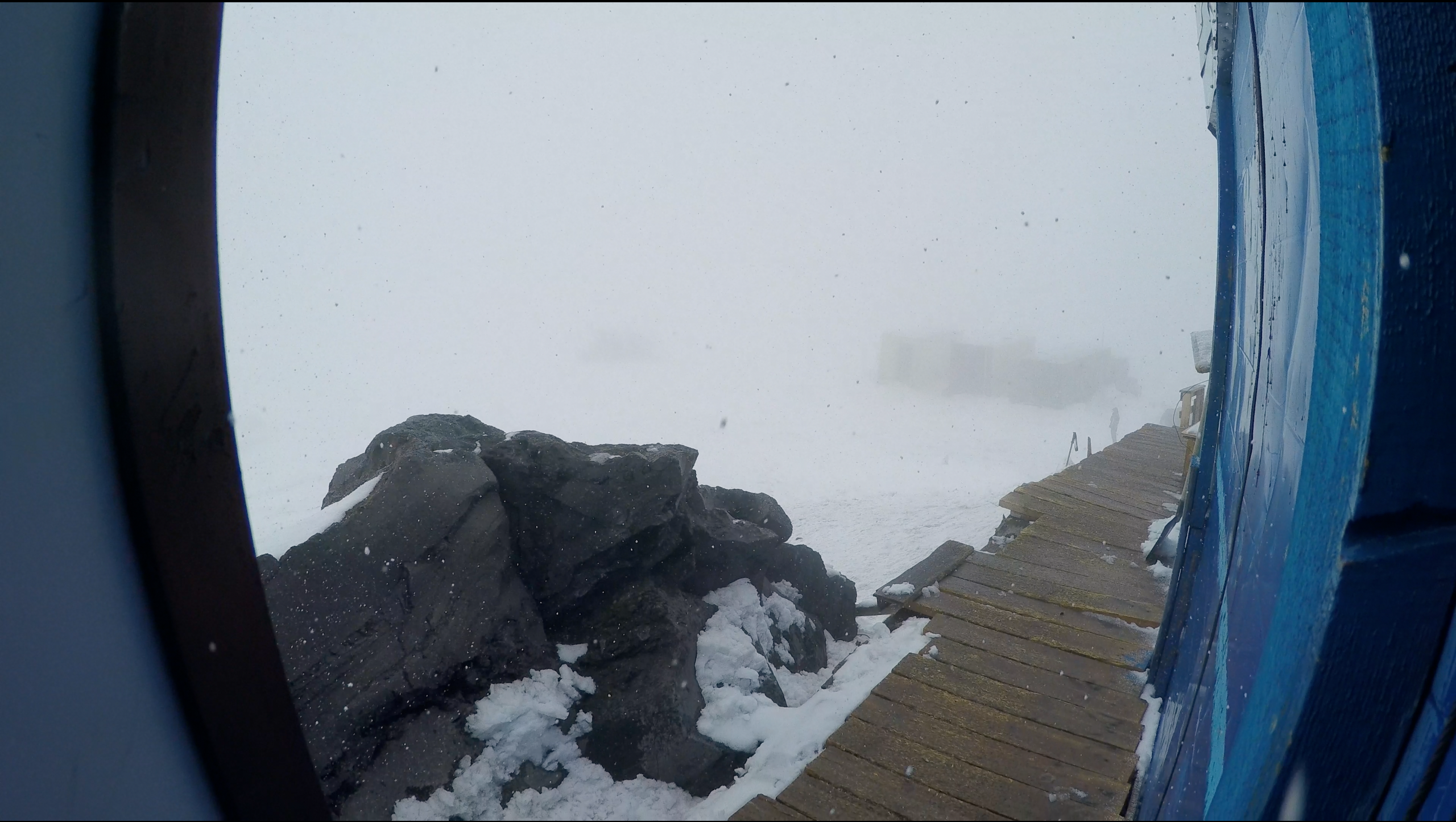 As usual before an alpine start, I had trouble sleeping. This is always the case, on any mountain, large or small. Being in the bunks made things more challenging because of cramped quarters, etc. Great hut-mates, I assure you, but not a restful spot for any of us.

Nevertheless I did sleep, with the deep and funky dreams triggered by high altitude. I awoke moments before the appointed time of 1:45, and vaguely heard the sound of… rain? Could that be rain I’m hearing through my earplugs? Not up here… not at 13,000 feet. Snow, maybe. It made no sense to me, because in my mind it was clear outside.

The appointed time came and went. Had I missed the departure of our teammates who were set to walk an hour earlier? What was going on?

My bladder filled, and it was time to step outside. Opening the door was shocking: Cold wind, 10 meters of visibility, horizontal snow flashing past, and an inch of grainy snowfall underfoot. Holy shit, it’s a blizzard. I took care of business and stumbled back inside. My down parka had become soaked in the 90 seconds I had been out there. There was absolutely no question: We would not go for the summit today.

In a sense, this was a relief. I was disappointed, but the mountain had settled the issue definitively, and there was simply nothing else to say. Even going outside to pee was hazardous. Climbing to the summit was literally impossible.

I crawled back into the warm sleeping bag and settled in. Hearing the storm lash at the hut walls was strangely soothing. We were dry and warm inside. We had enough food and fuel to last for days. We were fine. In fact, we were on vacation.

I awoke to the smell and sounds of breakfast, the last person to emerge from the rack. My teammates were amazed that I had slept so soundly. Apparently we had thundersnow, with synchronous thunder and lightning. And plenty of snoring from the team. But I heard none of it… and apparently I was not the source of the snoring, either.

So, the plan was simple: Pass the time. Epic games of Spades seemed to last for hours, although a reluctant check of the watch revealed that only 20 minutes had passed. The frog-tub-rug-brush-ghost game went round and round, and round again. We laughed and laughed. Thank goodness there was no vodka in the hut, that would have been catastrophic.

A brave team finally became so stir crazy that they mounted a mini-expedition to stretch their legs for a few minutes, until Mike shut them down for fear they would be lost in the blizzard. We had no choice but to stay put.

And, eventually, the storm broke. The sunshine allowed the snow to melt on the roof… and leak right onto Fred’s bedding. So that’s why there’s a ladder to the roof, to facilitate sweeping it clear… and plastic taped to the ceiling where water has intruded before. Some quick thinking and use of a nasty-ass chamber pot seemed to do the trick, until it began to leak again, and Fred had to relocate.

Our lovely teammate Ali wisely chose to descend due to an injury, and Sasha took him down once the lifts went back into operation. He kindly left behind a treasure-trove of food which we greatly appreciated. He is a great member of the team and was sorely missed.

Eventually Sasha returned from the valley, bearing roasted chicken, yogurt, milk, and good cheer. She had taken a shower, why not be happy?

A group of Russians moved into the hut next door. It was not clear to us why they were up there… they seemed to indicate a desire to climb Elbrus, but their single-wall leather boots and raucous guitar playing suggested this was amateur hour. So did the fact that one of their parka zippers fell apart. We lent them a multi-tool to put it back together and they were so grateful that they gave us some strips of dried rockfish. At least, I think that was a gift rather than a curse… none of us dared taste it.

Evening came, then dusk. That chicken tasted amazing, especially served with bacon-laden mashed potatoes. I could almost taste the summit…. But, out the window, the cloud cover remained dense, the wind was substantial, and our chances of getting up there seemed 50% at best. In fact, I was very concerned that we would get shut down again. The thought of returning without even leaving the hut loomed large in my mind. This was supposed to be my victory lap, the last of the Seven Summits… and it had been a super trip, but NOT one that I wanted to repeat. Ever.

Nothing to do but tuck in early and try to sleep a bit before the 1:45 wakeup call. I lay there wide awake until just past 10 PM, playing out scenarios in my mind, and thinking of my family. Please, please give us a shot, just one shot, and we will nail this.

2 thoughts on “Elbrus: The Blizz”